The short hike we took the other day was cut a bit shorter by the big dark clouds rollin' in... so yesterday I shut down my 'puter work and we headed out mid morning to stay ahead of the expected afternoon storms.

Where we're set up there's no above timberline... sorry Bobbie and Mark! ;) ... but the Queen prefers less tilted land for walkin' anyway :) ... I keep tellin' her it's easy to walk on flat land in the mountains; You just go around the mountain rather than UP it!

I'm not to sure she's buyin' that argument... but if I keep the trails not too steep she's agreeable.

One nice thing 'bout hiking in the high country, when you're on your own schedule... there's plenty of spots to take a break and cool out. 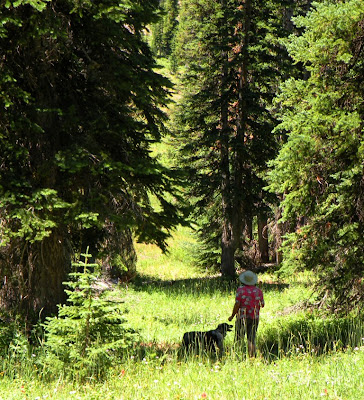 When it gets hot and your wheezin'... just shade up for a bit and enjoy the scenery while you cool out. Then you put one foot in front of the other and push on!

This country we're in is right on the boundary of some wilderness country to the north and east. We're on the southern end of the Zirkels. Not exactly empty country bein' fairly close to Steamboat... but... there's plenty of room for several folks to stretch out without bumpin' elbows.

Though she prefers taking her walks over gentler topography... I'm a stubborn Ol' grunt. Not one to allow bein' an army cripple to slow me down too awful much... 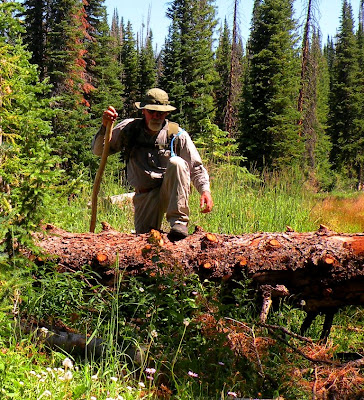 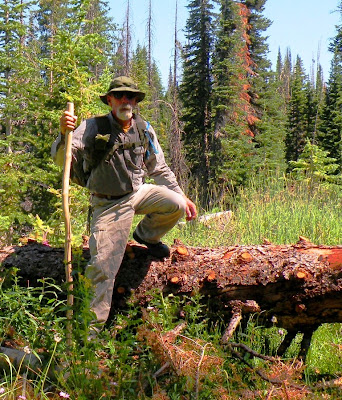 Leastways I'm not 'bout to let some lil ol' stick across the trail block my path! ;)

I'm kind of a chameleon of sorts... Biker Cowboy Leather Carvin' Hardware Salesman Gypsy DAV Bushwhacker! :) ... it wouldn't be so bad except ya gotta have a different wardrobe for each character!

It's just past the wildflower prime around here... though there's still plenty of color... 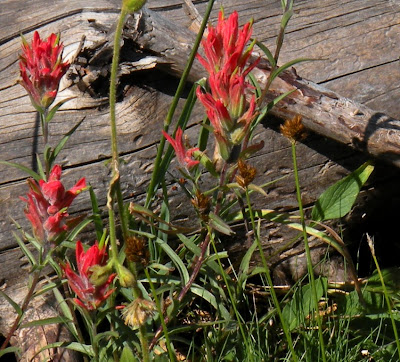 It's good there's plenty to photograph. For a photographer of my ability level... I need plenty to choose from to get a good picture. I comment all the time about how something is awful pretty to look at... but I just can't seem to capture "it" in a photograph... Water falls are mostly like that for me... I admire to see 'em and just stand there soakin' up the view... but to bring a photograph of 'em home to show... I just struggle at that. 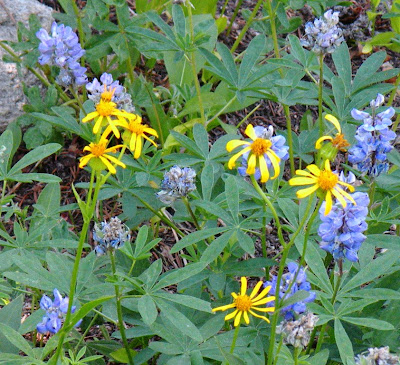 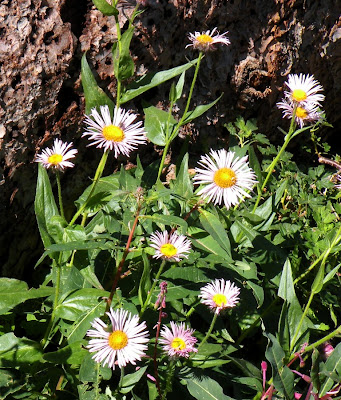 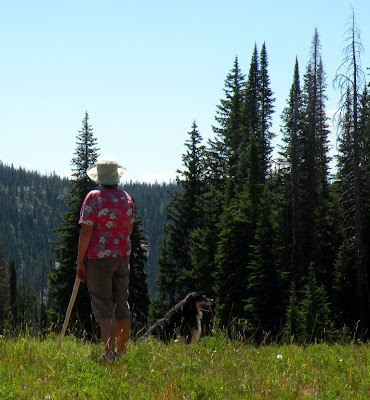 You can always tell when we've hit the far point and turned for home. The dogs have a pretty good sense of direction... and by the time we've made the turn... They've burnt enough energy that they start keepin' to the trail a bit more... 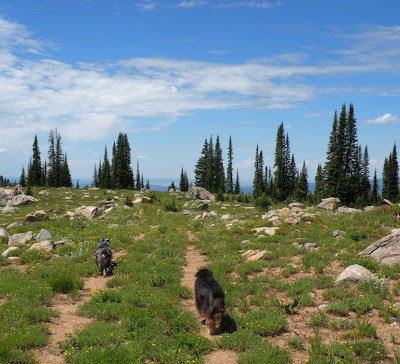 They led us back to camp so I could get back to work makin' the doughnuts to try and recover from the expense of this summer of Not goin' too far to try and save up a few bucks! :) Yeah... it was such a good plan too.

So... I was sittin' at the table workin' through the final edit on the next book when this pair rolled by on the road that passes our camp... 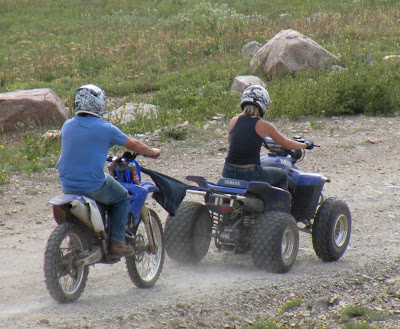 Pretty gal runnin' her ATV draggin' her guy on his busted/out of fuel scooter... I thought the "tow strap" looked a lil' strange when they passed. Wasn't till I pulled up the pic that you can see it's a sweat shirt! Talk about "they'd give you the shirt off their back!" Though... I think she's down to the nitty gritty now!!! ;)

The day ended with BBQ'd chicken on that good lil' Weber Grill we swapped out to... sippin' a beer and watchin' the sun set in a fine camp.

Though the evil of man is never ending... Life goes on.
Brian
Posted by Brian at 8:39 AM

We've been following you faithfully for a while (Chuck and Ann) and now I notice you are sporting a BEARD!!

Chuck put one of those back on this trip to Alaska too. Keep on writing - looking forward to your next book.

That's nice country over by Steamboat... but so different from Lovely Ouray.

Chuck and Ann; Actually the ? beard/gotee appeared more than two years ago! :) Guess I'm shy... don't post too many pics of ME on here. The book is in its final edit stage... hoping to be done in a week or less...

Mark; It is... don't know exactly how... Not as Steep? or not as High? just a personality of its own I guess.