The Mountains Continue to Burn 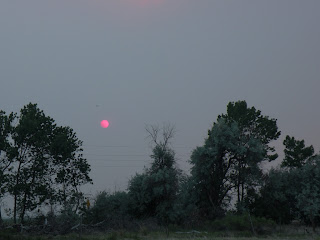 Late yesterday afternoon, the Sun shone through the smoke like it was bloody... where we sit... some 25 miles or so east of the fire.

At this point the only efforts being made are to protect and evacuate people and attempt to save structures. The wind has been too high to allow commanders to put anyone in front of it to fight it directly.

The fire has been Jumping ahead large distances from the wind. If a fire fighter was caught behind one of those "Jumps"... well... that's why they can't fight it much yet.

Though we're parked many miles east... the smoke here has been at times as if the house across the road was on fire. Some time yesterday the beast jumped Highway 14 I'm told and is or was racing toward the ranch we lived on for many years. Highway 287 going that way is, or was the last we've heard, closed.

We were going to move up to Red Feather Lakes for the next couple of weeks... but with this fire bearing down on that area, and just one road in... and the same road the only way out... that's not gonna happen. It's a bit of a ways up there... but... this ugly beast could be there this afternoon if it took a mind to... 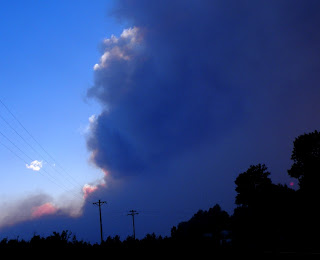 Heidi talked to a rancher and his wife yesterday. They're having to sell off most of their cattle this year. The drought this winter has been pretty tough.

He's ranched for 15 years and from everything I heard, he's done it right.

In frustration, he called one of the "Old Timers". A rancher that was a neighbor to the place we were on. His family is third or fourth generation on his place I believe.

When asked what they could do in years like this he replied; "I don't know. I've never seen it this bad. Ed is in his 80's I believe.

Momma Nature... Like I said... has got her shorts in a knot and is making things right... in the Savage Imbalance I've spoke of...

You know... Managing these lands, which is our responsibility... is like, Riding a Motorcycle through the weather of the Yukon and Alaska.

If you fight it, if you contest it... The weather there will eat you alive. You have to embrace it. Learn its ways and go with it. This land is the same. Defy it, defile it, get arrogant in thinking you can force it to your will... and it will crush you. You have to work with it. Get into its rhythm, learn its ways and flow with its force. Do that and you can achieve great things. Fight it and the land will be here when you are but ashes in the wind.

Like the roof vent caps I replaced yesterday... They're put up there to close out the weather... right? Yeah well... fighting this land and trying to impose the silly idea of "Natural Balance" instead of working with it is just like those vents... The flimsy plastic efforts of man didn't fare too well against the rage of Momma Nature... did they? How is the "Natural Balanced Eco System" mentality working?

Maybe it's time we moved to intelligent husbandry of our forests... and away from the foolish Bambi and Smokey the Bear inspired "Save a Tree" baloney that abrogates our responsibility and is devastating those Forests.

Hunting for a Smoke Free Camp
Brian
Posted by Brian at 7:37 AM

Brian: wishing you a safe place to hunker down.
I usually don't comment much, but felt compelled to do so, going back some. my son sent me pice of the snow in Zion, same time as you, the pics are so alike I think you had to be standing next to each other, and at arches national park, and monument valley, seems you two were chasing each other without knowing it.
This time, a little different, he is a Smoke Jumper
Waiting on the order to go. God bless you both and pretext you both from a growing inferno..
Safe journey

We sure hope you are able to steer clear of the fires! Are you in NM area??
Be safe!