Lil' Bits... Pink Fishing Poles... and Motorcycles in the Rain

The Eagle's been perched over to the east side of Fort Collins. We've been sallyin' out of here, almost daily. Heidi worked the store for a few days for the emergency trip by our manager gal... and we've fit in a couple of Denver runs to see the kids.

Took the Jillian and her brother to the zoo one day, but timed it wrong. They've been building a whole new section at the Denver zoo for quite a while; something like a 20% increase in area. It's just recently been completed, so we thought we'd go see it.

Yeah well... Not so much. Our timing is impeccable. We managed to arrive on that one, single, day between the "Sneak Preview" for Zoo Members (we paid for an annual a while back to save over multiple visits) and the grand opening... That one single day... when the New Section was closed!

Then Heidi took off to an Agility Competition in Albuquerque Friday... So Saturday morning I climbed on the Raider and run on back down to Denver.

Lil' Miss Jillian was doin' a Fishing Derby. I thought it might be fun to see her catch her first fish... 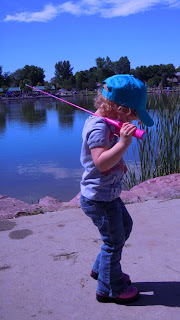 ... and it probably will be... whenever that lil' blond redneck diva ever manages to git-r-dun!

ah well... there's lots of lakes and rivers and she's not exactly over aged yet... so there's time.

From just 'bout anywhere in Denver, or anywhere 'long the Front Range for that matter... if you raise your eyes off the ground and look west you'll see the High Lonesome.

I could've just pointed the Yamaha back up the Super slab and race on "home", but where's the fun in that?

That way, I could make the run up the face of the Front Range from Boulder to Estes Park and avoid the Interstate.

Now... normally... that's a purty good lil' roll. Mostly 'cause when I usually do it... it's mid day of the mid week... NOT on a Saturday when a few thousand texting cagers have the very same idea! :)

and then Momma Nature has her own ideas of kickin' up the "Interest" factor...

It's always fun to be rollin' up the road and see the clouds building above you... and wonderin' about rain gear... Should I or Shouldn't I? ...

More often than not I choose Not... and Not it was this time. I made it to Mickey D's in Estes park warm and dry to wait out the storm... almost.

Yeah... It had one dump left as I left that shelter and started down the canyon... But... since I ain't no witch... I didn't melt! Though some might argue that I do smell better now. ;)

Ridin' in the rain and Grinning about it... one of the things that makes normal folks just look... and shake their heads in sympathy for the poor senile old puss gut... who ain't got sense enough to come in out of the rain.

Oh Brian, she is adorable. They grow so fast. Ours will be 3 months old on the 15 th. seems like she was just born.