It's hard to catch up when your head is going four different directions!

The past week and more has been spent wandering the desert, hunting future Boondocking camps... and Living Free!

We found this camp a few days ago using our old method of just checking out the NF roads we passed. Not having any signal in Mesa Verde I couldn't use my High Tech Methods. ;)

Grace commented yesterday that she'd read "Negative" comments on the Delorme Atlas... "roads that it showed but that quit"... and roads they couldn't find... People totally dependent on technology...

Which is why I use Google Maps as a double check. Paper maps are largely made from information that might be years old, not much of a way around that for 'em... old as in the last "Survey". In the intervening time roads and man made details get changed. It's Life.

The main detail I need from it is the National Forest and BLM boundaries anyway... and those rarely change.

The Google Satellite views are only months old, so a much more up to date check on the roads that are or aren't there.

That's why you can't just depend on paper maps... you got to use that thing twixt your ears... Just 'cuz the GPS or a Map tells you something, don't make it true. You have to use your eyes too (and that grey thing behind 'em!). I can't help but laugh at the folks who get into genuine jackpots 'cuz they blindly followed the voice on the GPS and drove up on the sidewalk! ;) crying all the while; "But the GPS said!...."

All the methods I have in my "tool box" for finding camps brought us here to our current camp on the San Juan National Forest; 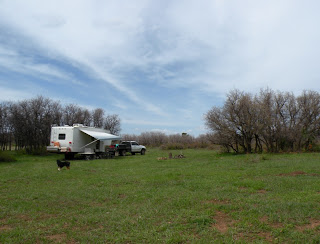 Not too shabby a yard for a broke Ol' Buster eh?

We'll have to get the hell out of Dodge though... 'fore it comes time to Mow! ;)

and the views from here aren't too bad either.

Just up the road the last storm is just melting off the high Peaks...

You can see the trail we came in on... which is why I say you still need to stop and walk what the maps and satellites tell you. Never hang all your riches on technology. Get out and use your eyes and your brain pan.

Fail to do that and technology is gonna leave you twisting in the wind... Every time. 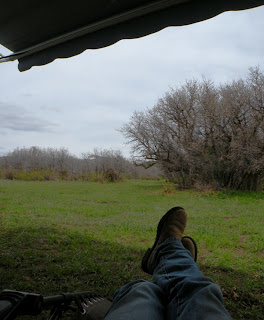 But learn how to use it without surrendering to it...

and you're sitting in the shade with a cold brew, listening to Bob Seeger "Roll You Away"! ;)

and feelin' guilty 'bout all the folks pounding their fingers to bloody stubs on the keyboards in their cubicles...

After all I've talked 'bout how much we don't have (as in dollars) I still get mail Working around that question.

I do believe folks think I'm yankin' their chains when I say we got nuthin'.

It feels kinda like walkin' down the street naked... though as purty as I am that probably wouldn't be too bad ;) ... but here goes;

We've generally got less than a grand in any sort of emergency fund. Often, much less. Truly! That wasn't the Plan... just the cards life dealt. 2007-20010 whupped my behind like a step child!

We'd Planned to double our meager stake with our recent labors at PIR... but then... the Dental Fairy whacked me in the caboose... and PFFFFTTT! Another Plan shot to hell! Oh well, Life in the West.

But... let's just say that our Living bounces around just over or just under 24 grand a year. Used to be that was a significant amount. Not any more. Not with the price of bread and diesel.

The point is... just 'cause you ain't got a lot of money is NO EXCUSE. The thing that can keep you from living how you want... The ONLY thing... whether it's the way I'm goin' down the road or just about any other, is You.

It's how you look at the same things I do. You go "down the road" and hit a deep pothole that jars your teeth and blocks your progress...Some nasty Ol' sow bucks you off and sticks your head in the sand... WHOP!

Kinda like the Army tossin' me to the curb with a broken spine. Too stove up to soldier any more... So I went back to another dozen or so years of Cowboyin'! :) Too dumb to do anything else.

Sure I understand frustration and weariness. I get there too. So wallow in your depression for a bit... then...Stand up. Dust off your jeans... take a deep breath... Cowboy Up! and Get Over It!

What happens now depends on how you respond to the endless obstacles that come along. I see two options;

It's consciously choosing to grab the Devil by the tail. That red headed orphan that just smacked you down. Take a good solid grip on his tail and start spinnin' that sucker till he's dizzy... Once you've got him sailing fast... and when he's pointing straight at a solid wall... Let go!

Ha ha! If you're a lil' bit on the mischievous side... tie a few knots in his tail 'fore you let 'er fly!

Tomorrow I'll start catchin' up on the past week. like our run over the Moki Dugway...

Sittin' in MY cubicle... surrounded by the San Juan National Forest
Brian

I, too, use several methods to find campsites, similar to your way. Yeah, you gotta grab that devil tail, no doubt. Love your pictures, Brian.
Hit another couple of potholes in the last week. Funny you should mention the Army and the broken spine...my first spine (and grey matter) troubles came from shrapnel in the 'Nam...my second spine troubles came from an oil field accident, which, being young and kinda dumb, I let 'em get away with a token payment to me because they said "I would always have a job." What a crock that was. At that time I had no experience with the corporate vampires...anyway, still following you Brian, and I like the cowboy way...

The potholes don't seem to stop... so you have to keep a shovel handy ... and a pair of gloves so the Devils tail don't burn your fingers! :)

Saw your other comment too... and the only American made boots I've found far exceed my ability to pay! :)

I keep up on your travels... You're just not the wordy bucket mouth some "Others" out here are ;)

You left Mesa Verde just in time. Today the maintenance crew from Aramark installed a "self-pay" station. Aramark was upset about the free camping, but the National Park told Aramark they had to have a way to collect money - that the Natl Pk would not do it for them. The campground officially opens on May 10th this year.

Brian, love reading your stuff...hope to follow in your bootprints in a couple of years.

"The Google Satellite views are only months old, so a much more up to date check on the roads that are or aren't there." Well, maybe sometimes. Just for fun, do a Google satellite view search for "Fort Walton Beach High School, FL". You'll see a running track just south of the school building, under construction....waiting for asphalt. The track was paved, then I painted the competition lines on the surface, that job was billed out in April 2007. Hmmmm. Some of the satelite images are really old.

I only mention this so that you don't assume that all the images are fairly recent. FWB is not Metropolis, but neither is it the sticks.

CowBoy Brian,
It's a purdy camp alright... and to think your grass is already green under foot and wheel while I just seeded the scar around my sticks and bricks, and that I'll be nursing it for a month or more while you're running free just pisses me off :)).

Jump on the Raider and drop by while you are in our San Juan neighborhood... I got cold beer and cookies here in the Box Canyon. We can sit out on my newly poured patio and watch the grass grow.
mark

Nice to you see your feet up!! If a fellow couldn't relax in that view then??? A few things i can't do these days because of lack of funds but i sure know how to have fun still. BiLL

"The point is... just 'cause you ain't got a lot of money is NO EXCUSE. The thing that can keep you from living how you want... The ONLY thing... whether it's the way I'm goin' down the road or just about any other, is You."

I live Fulltime on the road with an annual income of just under $20,000. If I did NOT live as a Fulltimer it would not increase that income so why not live like I want.

When the question of how much does it take to live Fulltime on the road is asked I usually say "How much do you have?". Generally we spend however much we have, it does not matter where we happen to live.

Teri; :) Poor Aramark. We only moved maybe twenty miles. Up onto the San Juan. Same facilities... Zero Cost... Works for me! The "commercial" outfits need to exercise a lil' more effort to make their setups "attractive". We talked just last night about how the Forest Svc. and Park Svc. Concessionaires charge nearly the same as an outfit like KOA for dry camping... but don't provide anything close in the way of facilities... Just makes boondockers out of more and more of us. Ah well... their choice! ;)

Bruce; Point taken! and is why I also said/say; always get out and make your final check with your eyes and your own Brain! Things change and Technology will let you down if you give it too much power. strange how google updates some areas all the time... and others not for a long time. Bottom line is you have to employ common sense! ;)

Bill; Yes Sir! It don't take a fat wallet to LIVE and have plenty of stories to tell!

blogger's spam thumper is on the fritz... a couple of folks got snagged for a short... but they're free now! ;)

BCB; don't be surprised if you see a big red asphalt burner roll up your hill some day soon! ;)

ED; Exactly sir! and if I did NOT live full time on the road... my income would likely shrink! ;) while my expenses would swell up big time! Makes the decision easy! :)