Unknown to Many... Ghosts Roam the Desert

Got up yesterday, to a grey and overcast morning...

It looked to be a pretty dreary day comin' on... I still had to get the bike down, she was still sittin' up on the truck. I was just about to do that when the sun managed to chew its way through the cover and brighten things a bit...


Just putting the bike on the ground almost always helps brighten things up as well... not as much as putting her two wheels on asphalt, but some. We did roll down to Quartszite for fuel and up through the Plamosa Mountains for an hour or two in the afternoon. The sun had for a few hours mostly banished the cloud cover and let the solar panels replace much of the juice I'd consumed into the evening the night before.


I set my camp nearly on top of where we parked late last winter... It's a good spot. Folks can pull in beside and behind, though there are few now... but... No One can wedge in between my camp and the open desert... Gives a man seeking refuge the space he needs.

If you walk out into that Desert, only a few hundred yards... and keep quiet... you can hear 'em. Some are laughing... some are very silent... you can only feel their presence... and some... sob their grief...

You can't see them, but, they're there. You can see their tracks...


This land, north of Quartszite and around Bouse, was the training ground of George Patton's Armored Divisions... before they shipped out into the firestorms of North Africa and Italy.

Approaching 70 years since those Men drilled in this desert... The tracks of their presence yet remain. With the dark clouds floating in a sky of blue hope. Hoping only to come home. A hope, that for all too many, was never fulfilled.

I stand out in that desert, amongst the scrub and Saguaros... and feel them near. I can hear their voices on the breeze. The sounds of their tanks. You can hear the loneliness, the misery and the frustration as they voice a simple thought; "Will we never learn? Will YOU, never learn?"

The scars remain visible on this desert; A silent, solemn reminder. I pray they never disappear to be forgotten. 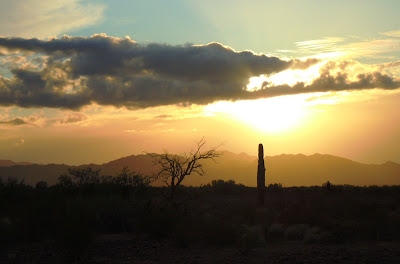 It's quiet and serene here in the Desert. Some see it as bleak and barren. It doesn't have the spectacular vistas of Zion and Glacier country. It lacks the geysers and showy attractions of Yellowstone... and It doesn't have the culture or ocean of the coastal villages. nor the Bears of Montana.

What this Desert has... is a history and a Spirit that seeps deep into a man's soul, and can never be extracted. It reminds him, quietly somehow, who he is... and ... lets him just... Be.


Poking Around inside my own head
Brian

Looks like a wonderful place to recharge the soul and the batteries.

It's the desert I love to get lost in. Less than 100 miles away.

A great winter camp till your feet get itchy, priced right, too.
We got the "Show" going on up here in Zion... those same clouds rolled in here and made a nice veil curtain among the Red Cliff Mountains... hiked the west rim to heaven and thought I caught a glimpse of God.

Looks like two of my favorite bloggers are in the same area - RV Boondocking & Tioga George.
Any chance of a meet-up??
Scott in New England