Our last circle, last year, was 'bout a month later than now, and three hundred miles or so south...


The day before we got here, last year, it was 70 degrees and sunny... when we pulled into Cape Disappointment at the mouth of the Columbia, the rain was coming in buckets and the surf was 20 feet high... 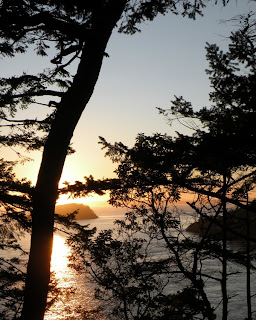 Not a cloud in the sky... the sea is calm... and the sunset, while maybe not spectacular...

The only complaint a guy might could have about the coast is... ever'body else likes it too! So any place a person could sit a hooch... they've built one...

That leaves precious little for boondockers to squat on.

So... when we come here, we pretty much don't even try to find such accommodations and just suck it up and pay the freight for a camp... Which, for us, is expensive on this Pacific Coast.

We'll boondock when we move back away from the coast. Which, with our budget... that'll only be a very few days! :) Oh well... Life in the West... I could be back sellin' plumbing parts!

Instead of bein'... a genuine, published author! Livin' the highlife in a wore out 5er... gettin' drug into places like this... by a rattle trap Dodge! :) I'm gonna have to be one of those 'noisy' neighbors while we're here I guess. The old growth forest, we're sittin' in... is quiet and nice... but... outside of 'bout six minutes, just after one or so in the afternoon, the only sun hittin' the rig is filtered through the canopy, so there ain't much in the way of battery chargin' goin' on :)

So... I guess that generator we bought... the last time we hit the coast... is gonna get a lil' exercise.

It's a rough world I'm livin', to have such a pile of piddly complaints eh? oops... guess I've gotten a lil' close to Canada :)


Do a lil' beach combing, a lil' kayaking in some quiet water... a lil' museum gazing... and... if I can find somebody who's left her purse unguarded :) (ya gotta watch out for western banditos!)... a ferry ride to San Juan Island? To run the Raider around it?

Let's just hope... THAT boat don't leave my precious Raider... on the bottom of Puget Sound!

Sittin' on the Pacific
Brian

Return to the main site of goin' RV Boondocking or Visit my Sister website Motorcycle Touring on Freedom Road
Posted by Brian at 8:18 AM

Stop on Lopez Island. My cousins live there - on Jack Rabbit Lane:) When they put up street names, they got to name their own, so - a not to their western Kansas roots:) Know they would love to have you visit their fire for an evening.

The word is NOD, not "not" in the previous comment.

Last year, early Sep also, we visited a lavender farm on Whidbey Island and 2-3 RVs were overnighting there. When inquiring re-boondocking, the owner said, "It's ok".
We were in a rental car and stayed at the Blue Goose Inn/B&B in Coupeville a few nights.
Got a kick out of driving S to catch car ferry and took pix of signs saying if you are "here" you have a 90..60...30 minute wait. Ouch...

Thanks for the tip on the Schoolhouse Brewery. Had a great lunch there today. Later crossed the Cascade Range too. WOW what beautiful vistas. If you are going Pt. Townsend way on the the Keytstone Ferry, there is a campsite at Ft Worden. Not a boondocking site but nice area. If you are near Mt. Erie and on your motorcycle, go to the top--too narrow for your rig but oh the view. Thanks again for the brewery tip--black bean burger was delicious. We head south of Seattle tomorrow to visit family. Hope to do Puget Sound again on another trip.

Beautiful spot you are in there guys--Michael has fond memories of driving our first motorhome there and wiping out a hanging basket on a downtown street when the tail swing on the MH surprised him! Enjoy your time there!

Snackmaster and Jan; Didn't make Lopez this trip... leaves plenty for the future!

janna and mike... uh... If you think HE was embarrassed... that's better than dropping the bike... making a tight, slow U-turn, to get on the ferry! :) two up weight is different than solo! ... ooops!