They Jump From a Perfectly Good Airplane...

When you're RV Boondocking, waaaaaay out on the back side of beyond... and you get up one morning... and way off, out in that rough, far country, that provides the view, that you chose your camp for... where not even a heli-attack crew can land...you see smoke...

Chances are, one of these fellas from the Smoke Jumper Base near Winthrop Washington, or one of the other 8 Smoke Jumper bases, from Montana to Alaska, are gonna come fallin' out of the sky on it!

Truth be known, I hadn't realized, the 101st and the 82nd Airborne Divisions, were formed... based on observation of this outfit, from back in 1939!

... and from what they say here... not too many ex-military manage to graduate their training schools. They've got as high if not higher washout rate than the Seals and Special Forces... Pretty inspiring group of people. 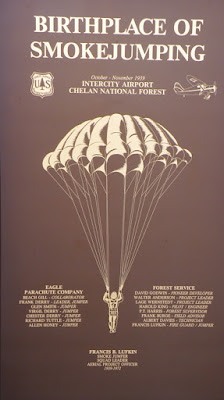 We dropped by the place yesterday, and was given a tour by Smoke Jumper, Jason Ramos.

Interesting guy... in his "Off" time... from dropping into Wild Fires by parachute... he's been living Full Time since the late '90's in one Sportsmobile 4X4 van or another. He's built himself a company from which he can market quite a few products that appeal to RVers... considering that he's tested them all through hell and tight quarters...


He's got everything from flashlights, interior/exterior/security LED Lights for RV's, knives and solar power to bamboo based bedding listed. As well as a goodly bunch of other products... that he uses on a daily basis... kinda cool! and since he's a full time RVer (Maximum Compression Variety with his Sportsmobile van!)... a Biker :)... and one of the elite firefighters... kinda lends him a lil' credibility I'd think. :)

anyhoo, he filled us in on quite a few lil' details 'bout Smoke Jumpers... who actually aren't the adrenaline junkies ya'll might think... fact is... an adrenaline junkie... tryin' to do what these guys do? just don't get it done! It's kinda like what Ol' Gus said; They're (adrenaline junkies) "Too leaky a vessel to put much faith in!"

What's more likely, that sort would get toasted early on. Their brains aren't in the Right place. These guys, on the other hand... are part of that Right Stuff sort... with their Hearts and Minds... in the Right Place. 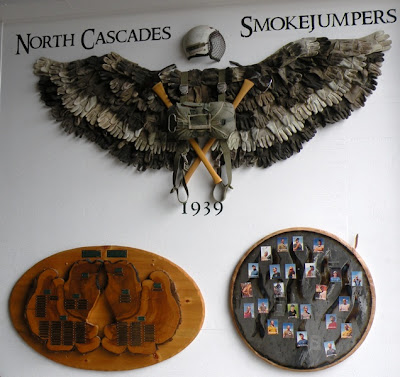 They've got a set of buildings there at the base, where, between flights and fire fights, the Fire Fighters build and maintain their equipment. Fact is, they, each, have to build their own jump suits and repair their chutes!

So... they're not only Elite Fire Fighters... they're seamstresses too! ;)

From the shops and equipment I could see... they pretty much build, repair, modify and invent, anything their job might could need.

Jason said the mix of people that do the job is interesting too... professors, doctors, teachers... people come from all sorts of backgrounds.

Some do the job "Full-Time"... and I guess some fit the Smoke Jumping into their "Other Life" schedules... working part of the year as a fire fighter... and the other in their "Other" profession...

Whatever they are... these guys... and Gals! Seem to be that sort that are "Driven" to do more, be more... kinda nice to see folks like these... when we're so beaten down... with that "Other" sort... ever' time you make the mistake of turning on the news! :) or listening to the verbalized manure spreaders out of D.C.

So... if you're in the area of Winthrop, you might want to stop by and take a look at what these folks do... might give you a lil' more appreciation for their efforts... and even those of the less elite, but just as special, fire fighters who walk into the fight. :)

Sittin' and Scheming in the Washington Woods
Brian

Amazing insight into the Smoke Jumpers. They are braver than I am. So thankful that they are there standing in the gap between us and the fires. I guess the average Joe doesn't even think about them, I know I didn't until your post.
We got big news, we got home, held our breath, sold the house(took a hit like you did), bought a real nice doublewide, and are moving to our camp in north Louisiana. We decided after the two and a half month trip that we could downsize with no problem. Our problem is getting rid of a lot of stuff we didn't even know we had LOL. Been here 36 years. What a mess.
Hope you and Heidi find many wonderful campsites in Washington.

Congrats on selling the place Sharlotte. These days just getting a place moved with a big "hit" is good. I know what a yen year. Collection looks like... Don't even wanna consider 36!!!