Remember When I've Told You...

We were rollin' down I-90, right on plan and on schedule, heading toward Billings. The plan was, cut south there, and likely lay up in Casper.

Until... A wandering Cowboy Biker and an Onliest Problem Collided...

That Onliest problem was a sign just a bit west of Bozeman that hung out over the road and said; "Ennis and West Yellowstone this exit!"... hmmmmmm.

Uh ... are you starting to see where this is goin'? What's the point of bein' crazy... if ya can't exercise your attributes?

Yup... Next thing anybody in the truck knew, it was cuttin' down the exit and turnin' south, juuuuuuust a mite early. :)

What can I say? The Interstate is a lot like algebra... BORING! and when you stop and think 'bout it, runnin' across Wyoming, and goin' around Yellowstone and the Tetons... makes no freakin' sense 'tall. Not when your whole deal is, Yondering!

Now of course splittin' off like that from the four lane to the two, might not add a lot of miles, but it adds a goodly amount of time to the same trip, so yesterday was a long day. Took the better part of 11 or 12 hours to get a trifle over 300 miles. :) Takes a lot of time to gawk and fiddle... IF ... you're doin' it right!

We hit the park at West Yellowstone and rolled down making our pass through the SW quarter in the late afternoon, early evening hours. I thought that it might allow us to get a nice wildlife pic or two... but it didn't quite work out that-a-way. And I had to do, what I never do... Which was stop at a gawking tourista Animal Jam, to get what I got. 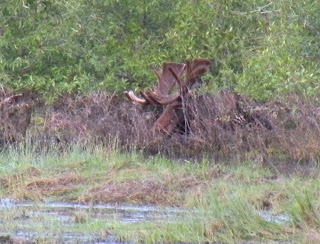 We came up on a jam... people jumpin' out of their cars and runnin' off into the bushes, donatin' buckets of blood to the skeeters, to capture that special picture... and for once, Heidi talked me into gawkin' along with 'em. All there was, was this mid size grunter, layin' in the mud on the far side of a boggy pond.

Missed the best part though. Some kid, likely bout 12, maybe 13 kept askin' his folks; "Can I walk around and pet him?" and they told him no. The kid was kind of whiny and upset; "Why can't I?"

I wanted to tell him; "You run on over there squirt, and I'll video your endeavor... so your Mama'll have something to remember you by... ya Bambi lovin' idiot!" I swear... if you want to see the failure of public education, all ya got to do, is stand around Yellowstone for maybe six minutes! I love the entertainment the place offers along with the vistas of fine country. :) 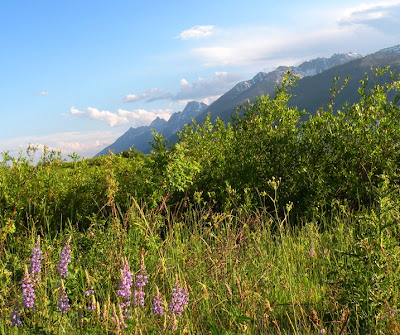 Pretty good place to run through long about sunset too... 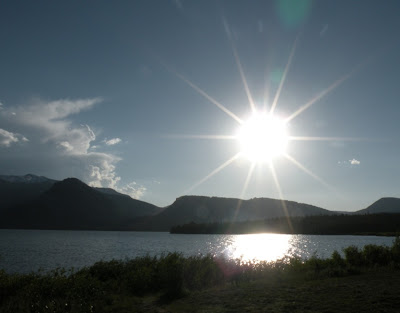 But, eventually you realize; "I've got miles to go 'fore I sleep"... so you put your butt on the seat... your foot on the pedal... and shake rattle and roll to get where you're goin'.

Though traffic was pretty light really, for the time of year (an advantage to the time of day we rolled through I think) we hit a lot of construction on the continuing rebuild of the highway over Togwotee Pass... and finally rolled into the lil' burg of Dubois hard on nine thirty in the P.M.

Once I swaller a few more cups of this motel coffee, we'll throw the bags back in the Ol' Dodge, and point it south... and who knows which way I'll find myself dy-vertin' today! :)

Some Place to be... But no Hurry to get there!
Brian

A perfect side trip.

Here people let there kids, and selves, wander into meadows with a herd of beefalo. Could reduce the stupid gene pool this way.

Been there, done that. The diverting from the plan, and the wondering about the idiots! Great post.

I hung around the West Yellowstone area looking for a moose or elk, and you just drive down the road and get a picture of one. Hee I sit grinding my teeth, wishing it was me and not you. LOL Have a great time at the wedding, sure you didn't forget important things like the album? Keep on posting, love the pics and your comments.
We ran across some of those gene pool rejects in Yellowstone, parents allowing children to approach the bison TOO close, and standing there with their campers, smiling. Weird people. Told Jim to drive on, I didn't want to see some child hurt or killed. Also, let's talk about the idiot with a video camera approaching the bear we saw at Yosemite. Where did these people leave their brains???

I want to know the "details" on that yellow stripe photo. Were you lying down on the highway with Heidi holding up the traffic to get that perfect shot? :)

Sharlotte; moose and me have a connection, I leave 'em alone now after my "education" :) and they let me take their pictures!

Janet; Nah... Heidi wouldn't come out on the road... I should be getting out of the hospital in a week or so and the Doctor promised that the scar from the tire tracks should mostly go away in time :)

Hey there my e-friend and cowboy author. A fanciful post.:) If you haven't read Blue Highways: A Journey into America by William Least Heat-Moon, I recommend the book to inspire your "let's take that road" nature. Stay well and keep ridin' those "blue highways".:)

Ted; That book is sitting beside my bed and I read a few pages before I "fall Off" in the evening... 'course the trouble now is... my bed is in Montana... and my butt is in Denver :)