Been doin' not much and workin' hard all at the same time.

Took a nice ride on back to Salmon, Idaho the other day, to find the only bank I could leave a bill payment at... and yesterday we put the Raider in the wind on a two up ride off the mountain and around to Painted Rocks State park, on Montana 473, below Conner. 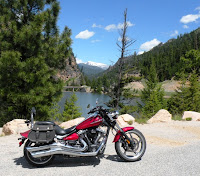 It's real pretty back in there, and a nice ride. For me though, it's was one of those peculiar places that's real pretty to look at... but I just can't seem to catch much of it in a photograph.

Oh well... guess there's some places you'll just have to go see for yourself :)

I'm guessing this would be a pretty rough place for a warm lovin' guy like me to spend a winter...

But... summers with a nice speedboat might could be some fun :)

After an hour and a half or two of leaning through the cool breezes in the Montana Mountains we caught a late lunch in Darby, at a lil' place called "Deb's".  'fore we headed home for the Eagle on the Mountain...

and... due to the fact that I pay such close attention to what's goin' on around me... we didn't run over the Big Horn Ewe and her kid, takin' an afternoon stroll down the Center line... :)


I managed to catch this one with my HD170 Stealth Motorcycle Camera... But it missed the Bald Eagle catchin' a fish in a pond as we passed, the fawn running through a meadow as we passed, and barely caught the Buffalo along the West Fork Road on the way to Painted Rocks...

That's OK... I needed to get home and get "Ben" out of some more trouble in that new story I'm building...

Boy... If you thought "Jeb" was good at finding difficulties in my last story, "A Matter of Honor", "Ben", the guy making noise and breaking things in the upcoming New story, is giving that Old Time Westerner a run for his money! :) I think you're gonna like this new one, even better then "Honor"... and at the rate I'm finding out what happened :)... I should have it out by the end of the summer... though, I'd really like to finish up before then...

I'll get back to it... so I don't have to sit up 'till midnight tonight... ''cause I couldn't sleep without knowin' what happened! :)

Return to the main site of goin' RV Boondocking or Visit my Sister website Motorcycle Touring on Freedom Road
Posted by Brian at 11:11 AM

Well Brian... You sure now how to go about payin bills!

Hell of a deal, when a guy keeps the bill in a drawer, so he has an excuse for a ride over the mountain ;)