We've pretty much settled into our "long camp" RV Boondocking routine... move a day or two or three... and then settle into a ten or fourteen day camp...

One thing that seems to have become a bit of an issue... after staying put for such a time... we have the habit of spreading out a bit... so it ends up taking a bit longer, to put everything back, organize the clutter... and get road ready! :)

So... an Item we've been forced to add to our "Long Camp Routine"... is loading DAY! :) This time, with all the Stay in Camp Weather we've had... we may have dis-organized more than is our usual!

Really adds to the draw of the idea of minimalism. If I could just part with a lot more of my precious junk... there'd be a whole lot less to spread around. :)...

on other things... they had a Free Fishing day event at what they call Moose Pond yesterday. Pretty much laid out to give the kids a flavor of fishing... had a big drawing and handed out a whole passel of Rods N' Reels... along with rubber worms and assorted other fishin' box filler for would be fishermen...

Seemed like the kids had their attention diverted to other pursuits by the time we wandered by... which left the fishin' to mostly Mom and Dad...

... but this Dad... complained that Mom was the only one catchin' anything big enough to keep. :)

Up above, the local Zoomies tried to show the ground tied locals that fishing don't require a rod!

This feathered fisherman... fisherwoman? caught one just as we walked up... but of course... I missed THAT picture... and although it hung around, demonstrating proper hover and dive technique for at least another hour... I didn't see any of the human variety locals taking up the challenge and diving into that high mountain lake... after any fish!

Late in the afternoon, we made another attempt to find the Elusive Utah Mooses... up above us at Elk Meadow...

As has been our habit... we found pretty ponds, peopled with croaking frogs... I still haven't managed to put a camera lens on... 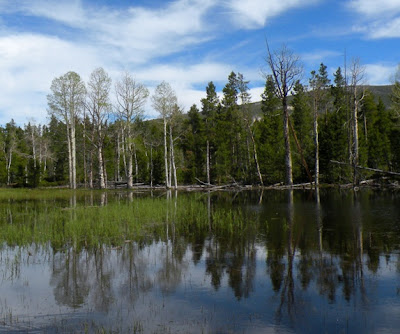 ... and shy Momma Elk... though I've not yet seen any calves from this season...

Quite a few of the trails around here are proper ATV and jeep trails... though, at least this early in the season, that use seems pretty light. But, a trail that's wide enough for a jeep... makes a pretty easy path for an old cowboy biker "stroller"...  who's gettin' lazier by the day! :)

I've thought for a while that it'd be nice to have an ATV... to give me a headstart up a mountain trail... but, I always end up preferring to just park the truck down lower... and walk quiet though the "Headstart" section... Why slight those first couple miles. :)

... and to think about it... it's a lot cheaper to maintain my boots...then another motor! 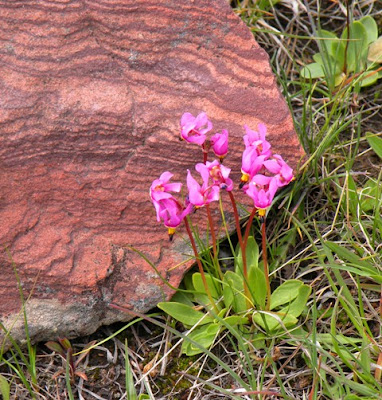 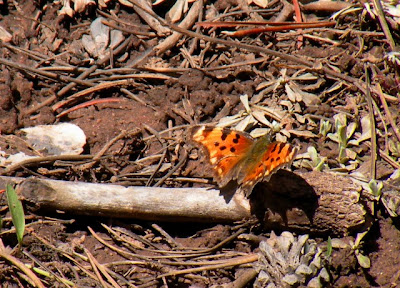 Truth be known... No matter what your Hardware of Choice is bicycle, atv, truck, jeep... kayak, or... even... a Motorcycle! ... there's a real tendency, no matter what you see... to keep on rolling.

To See, what there is to see... you have to stop, put your boots on the ground... and just wait long enough for the world to slow down enough around you... so the blur clears and you can see...

Return to the main site of goin' RV Boondocking or Visit my Sister website Motorcycle Touring on Freedom Road
Posted by Brian at 8:53 AM

I have found that my bicycle that I geared way down is great for a trail. I can go extremely slow and quiet. Carrying extra water and food and other items is easier than packing it. Even when I have to walk the bike along it is easier than carrying the load.

Even though I spread out a lot over the six months I'm parked I can be packed in about two hours.

As much as I like the variety of motorized transportation toys, I prefer my boots best.

Safe journey to wherever.