What Do You Do if You've Been Cooped up and RV Trailer Bound......

We took off, not intending to push it much... what with herself feeling puny, and still sick to tell the truth... but we Had to get out in the sun a bit... since we'd not seen it much in a while... and the walls were starting to close in! :)

Saturdays drive helped... but it just 'twern't enough... Know what I mean?

So... when the clouds broke open, and the sun come spillin' through, and it looked like it was gonna last for a while we chased the dogs outside, locked the door and set off strolling through the Utah Mountains.

You know, it's hard to match the Spectacular shots you get in places like Zion, and some of the extra special High Rockies... and sometimes I get to feeling like I'm not holding up my end of the bargain here, when the photos seem sort of, plain... but you know what? Maybe a guy shouldn't even think of tryin' to keep up with Zion, Yosemite, The Grand Canyon, Yellowstone... and all those Spectacular sorts of places... Not everywhere can be that special...

and if you did succeed in putting everywhere into that same category... ya kind of knock it all down to routine, don't you?

Bein' kind of honest here, if you stop and give it a lil time to percolate... A life with views like these here... if you had Them grace your eyes and soul, every day when you stepped outside, that'd be pretty gol' darn Spectacular itself... wouldn't ya think? 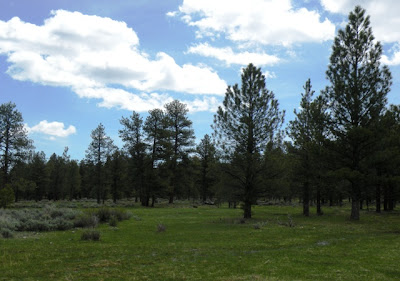 We started out only planning on a short walk...  but kept on puttin' one foot in front of the other... now for Mark and Bobbie... even a 4 miler IS a short walk :) but... when you've been layin' around and still aren't tee total up to snuff... We'd been thinkin' a mile would be just fine! :)

But, I kept askin' was she doin' alright... and she kept sayin'; "A bit farther"... till we got to a sign that said we'd gone nigh on to a mile and a half... just goin' out... Still felt like there was some left in the tank so we turned east and did another mile or so...


... are all flowin' like creeks. Most of the afternoon, we walked over in the grass... 'cause the trails were all full of water! :) No drought to speak of in this country... and Buck seems to prefer the Mountain "Spring" water. 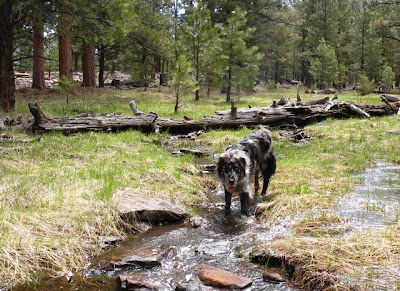 Deer and Elk were all around... mostly keeping too far off, lopin' away through the trees, to get any nice pictures. I guess they don't much care for Aussie Stock dogs. Even well behaved ones...


We kept hopin' we'd come on an overview of the countryside... before we hit that point where she'd say... "OOPS... I think I've gone too far to make it back... guess you'll have to carry me!"


It came close... but we found a lil' bit of an overlook... and still got back to the rig without us havin' to find out, could I carry her home, needs be! :) 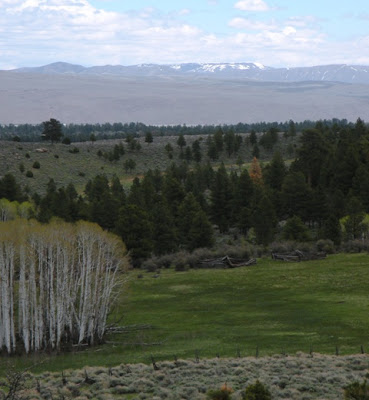 ... Seeing the remains of what looked to be a couple of Homestead cabins, there on the center right... from up on the hillside makes a person think; "How lucky they were to live here"... until you think about the snow slammin' through the leaky chinks in the logs at 10 below zero on a January night... and you tryin' to warm back up from a day of sleddin' hay to your cows through hip deep snow... and choppin' ice so they can drink...

We decided that it would be easier and shorter to go straight back south from where we were... then to follow the trail back and around... so... me bein' the great white trail guide... we set off and sure enough... hit just east of the end of the camp ground... pretty good for an Ol' Cowboy Biker one time Soldier...

... 'course that creek, 4' wide and a couple deep, twixt us and camp, had herself lookin' at me pretty close...

But not to worry! I soon had a rock in a narrow spot found and we got across dry... Without even a foot slippin' into the current! :)

... and you know what? It may have been good medicine... 'cause after a nice long nap... herself seems a bit on the "Brighter" side.

On the Mend in the Utah Mountains
Brian

Return to the main site of goin' RV Boondocking or Visit my Sister website Motorcycle Touring on Freedom Road
Posted by Brian at 7:05 AM

Looks beautiful...Utah and Colorado are two states that we have never visited, but maybe next spring!

grew up in Arizona... been living in Colorado for nearly 25 years...

Colorado has plenty to keep you busy and Utah has some extra special places...

Glad things are looking brighter out your way, weather and health-wise. The views look fine to me.

You can find beauty anywhere if you look for it.

Nothing wrong with those photos CowBoy, cause any place is beautiful when there is high country without people climbing all over it. Off season has it's price, but it's well worth the weather.
Onward!