Almost finished the RV Cargo Rack before we left...

Had the welding done... prepped and painted the steel... and wired up some new lights... 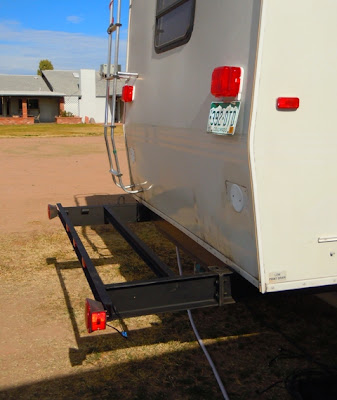 of course... it being me... I had to wire three of 'em up backwards, with the brake element as running light, which, makes the brake/turn signal, almost invisible... so... had to go back and rework that lil' glitch. :o) 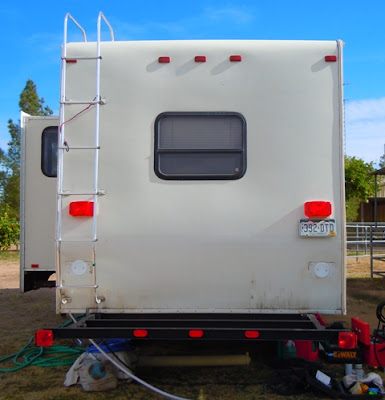 If you remember from old pics (forgot to take a fresh for this) the factory taillights were down where you can see those two white caps? ... that would put 'em below the boxes and generator that will be mounted on the rack... so... since those old lights were in iffy shape I replaced 'em and set 'em up higher to be visible.

... and capped the huge holes jayco put in, with electrical box covers from Home Depot...

Also added another set of marker lights in the center bar... I shouldn't have any visibility problems at night now!

Just have a lil' clean up to do, and secure some of the new wiring in place... along with mounting the storage box and Champion generator when we get back to the desert from Christmas in Denver...

Stayed in Albuquerque last night... cuz I was tired of  'dodging' all the other ... uh I'll be polite and call 'em Drivers...


.I don't know... it was slushy in places... and cold at 33 degrees... but... I sure can't say it was any excuse for all the cars and trucks I saw in the ditch, on tow trucks and in various forms of dented and smashed distress! :o)

I mean... lordy people... what's the deal? All I can figure is that too many folks are careless and not payin' attention when they're moving 60 miles an hour... when their driving should be holding their full attention? Kind of like that lil' gal that just about mounted her head on our rear bumper back in Utah a couple months ago?

Oh... almost forgot... My brother-in-law has come up with a creative and shiny solution for three large problems in American society! and we can deal with 'em all... with just one... single... solution!

Uh Huh... a ditch... we dig it along the California/Arizona/New Mexico/Texas and Mexico border.

Take all the dirt from the ditch (canal) and fill in New Orleans so it ain't below sea level any more... then...

... we take all those troublesome alligators in Florida... and put 'em in the canal! :o)

Rolling North in the New Mexico Liquid Sunshine
Brian
Posted by Brian at 7:50 AM

But What About The Environment!? I can just hear someone whine. We going to use backhoes or ordnance for this ditch. I like the ordnance idea, lots of noise.

And while we're at it, let's fill that ditch with some of the members of Congress:) Even sweeter:)