Boondocked on the Kaibab

We left Sequoia bound for Lost Wages, and a meet up with Rex Kusler. He's the Mystery Writer responsible for getting me to put my books on Smashwords and Amazon... wanted to share a cup of coffee and a conversation in person!

With the thought we'd make a visit, first, for a couple days, to the Mohave Preserve just a touch east of Barstow... We left Lake Kaweah and moved SE... but like is often our way... as we rolled along, our plans changed with the wind that was blowin'!

For one, the area just didn't appeal to us... and second... the wind WAS blowin'! Somehow, I just didn't think that parkin', even if it is boondocking, in a sand box... in windy weather was likely to keep me a Happy Camper... so we took the route that's open to all Rolling Gypsy's... we kept rolling until we did find somewhere to roost for a  bit... knowing also that this place would be where we'd be spending Thanksgiving...

Ended up at a place on the banks of Lake Mohave known as Cottonwood Cove. For five bucks, it made a good camp for three nights.

One thing about a lot of these camps we've been using is; We don't usually use such as these. Reason being, in the summer they're gonna be crowded, noisy, setups that just don't fit my view of how I want to roll. But, in the late fall/winter? Hey, when you got a location with a hundred or so spots, and there's only you and the camp host in the whole dang thing... makes a pretty private deal... and you still have the outhouses, water spigot...etc...

So... in the summer, I'll work harder at finding the less used places, and/or straight up Boondocking sites.

Thanksgiving was a pretty fancy deal. I did the grillin'... Heidi did the mashed potatoes, stuffing and salad... and we had our little Feast. 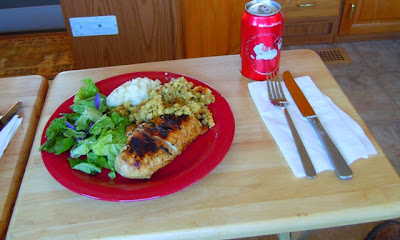 Yeah, yeah, I know... but does it really matter that This bird said cluck cluck... rather than... gobble gobble?

So... with our Thanksgiving Day meal cooked, ate and the dishes put away by 1pm we headed for Primm to meet Rex and his Lady... and discovered a little trivia...

So... something to keep in mind... if you're camped along the river(The Colorado)... and have appointments in Nevada or California somewhere... You're likely on Arizona time! ... worst case?... you'll be early for your appointment!

Yesterday, we packed it up and came east, bound for Phoenix at the end of next week. Now I'm getting into country I'm a lot more familiar with... so it was some easier to find a nice camp for some straight up RV Boondocking...

Along about 50 miles west of Flagstaff is Ash Fork. If you turn south there, you're almost immediately in the Kaibab National forest, and below that, the Prescott. Slow down so you can make the turn when it comes up... and turn up one of those Forest roads...

Not so far off the road you'll find nice spots to spend the night... or a week.

We've a nice camp, set in the Junipers... altitude is a little cool... 4 or 5thousand feet I suppose... but, it's quiet... and private here in the Junipers... there's what I take to be a hunting camp north of us a 1/4 mile or so... but those boys were only heard when they puttered by out on the forest road coming back from their day in the woods...

It ain't spectacular... but... sometimes... most times, just a simple, quiet view is what a fella needs... and this lil' Arizona hideout in the Junipers is what does me fine right now...

We've got to be in Phoenix on the 4th... Till then, I think we'll take the Dodge and do a lil' back roading... do a lil' relearning of this country... I've not been here in 10 years or better... used to chase wild cows in the Bradshaws 40 miles or so, south of here... But I was young and purty then!... and Arizona had less than 2 million people in it! now it's nigh on to three times that count...

Enjoying an Arizona Morning
Brian
Posted by Brian at 9:53 AM

Your description of your camping area sounds great! Enjoy your time there.

This is a nice area... though I'm startin' to wonder if I've got a weather magnet on my butt... this whole circle... we pull into a place and the sun is shining... a day later... ppppphhhhhhtttt! here it comes again...

Hundreds of thousands of acres of open meadow, thick Juniper... Plenty of forest roads for 4wd, ATV or dirt bikers to follow...

and all that Clear, Arizona air!

Looks to be a fine Boondockin' camp. Them Boondockin' Gods would be smilin' on ya' now. Do it like ya'll wanna, an to devil with the Gods. Stay safe, enjoy yerselves'.

Well... the weather man says snow is possible... sheesh! :o) and the road in here shows pretty good evidence that when it gets wet... it gets soft!

Got fuel for the generator if the sun goes away for a day or two...

and if it does get soft and muddy? Why... it's gettin' cold enough at night... we'll just wait for the ground to freeze... and we'll pull out in the dark! :o)

I bet you are really glad to get back where you see sunshine on a regular basis. Enjoyed all your travels and pictures. do you and Herself have any plans as to where you are going during the cold and snowy times this winter? Any chance of coming south??

Though this winter, with our budget as tight as it is... I'd be a little pessimistic... likely staying mostly in the Arizona area...