I'm Scrambling to Catch up Again!

:o) ... now what's this 'bout? I thought this deal was supposed to be simplifying my world? :o) ... I guess I'm just destined to be runnin' 'round six different ways as a way of goin'.

Well... the next month I'll sure be goin' one way... whatever way two wheels carries me...

For now, I'm In Denver this morning... a quick visit at the kids... and then roll on up to Nunn to park the rig again, where Heidi'll wait for my return... from the Great Alaskan Raid!

I still need to catch up the last day or two in Ouray... We hiked what I believe was twixt 7 and 8 miles, round trip Sunday morning up to Bullion King Lake. 'Course... climbin' that high, when you're still a mite lame (Heidi's ankle) is a slow deal that takes all day.

But the reward was worth the effort... a beautiful, soul filling place... only, for some reason, my mind was on other things... and I wasn't as lucky at collecting the pictures as I'd have hoped...

Maybe it's 'cause my feet were so tired! :o) 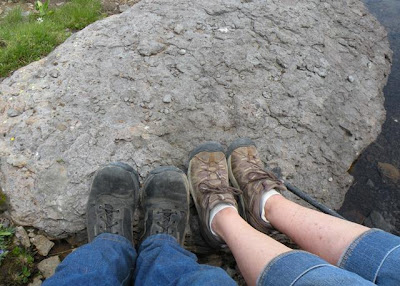 Whatever... I did capture a few... One lucky gal, not in our group, also did some capturing... got herself a gorgeous Cutthroat... 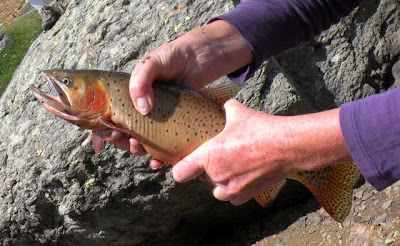 Which we all agreed, we'd have put it back... and, along the way were the flowers you're hopin' to find... 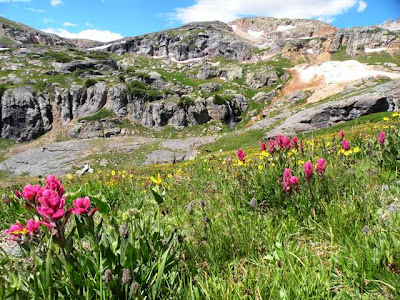 and the mountain streams to keep 'em watered... 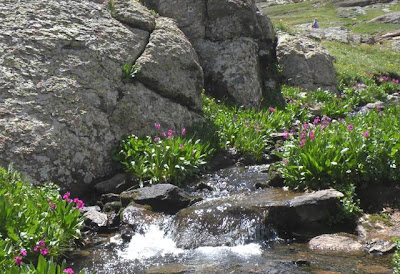 Finally, after a couple hours of feeling like you're climbing a ladder while holding your breath... you walk up over a break in the terrain, and there, layin' in a bowl at the top is Bullion King Lake.

It's one of those places that defies words... or pictures in a way. It's hard to capture what's there... You have to work your way to it, yourself, to understand... My pictures just don't give it justice. 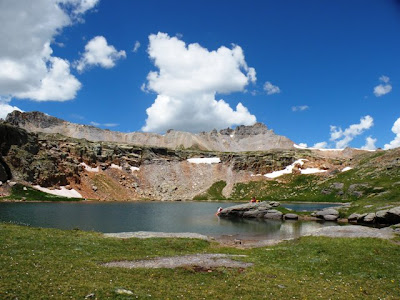 I told Mark; "It's kind of a religious place, ain't it?"... The serenity, and peace you feel, just sitting here in the sun... is a joyful thing... and you thank the Boss for giving you that last lil' bit of energy for the final steps... when you were about to say; "Well, I've gone far enough"...

'cause, without making that last push... we'd have missed a gorgeous place...

and Seb... fishing with his Grandmother... trying to catch his own Cutthroat... 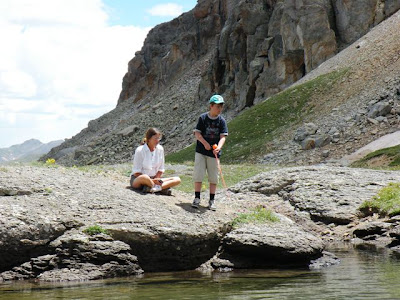 ... and it hurt ever'body a lil' bit... when his luck just wasn't there, on that day... but he's a tough lil' rooster... and bounced back from his disappointment, right quick! ... in time for ice cream in Silverton! :o)

Which is where we all went to reward ourselves with some super delicious ice cream... for being smart enough to follow Mark up above Timberline on Red Mtn. Pass!

The Durango Silverton Train was in town while we were there, and we got to see it before it pulled out. 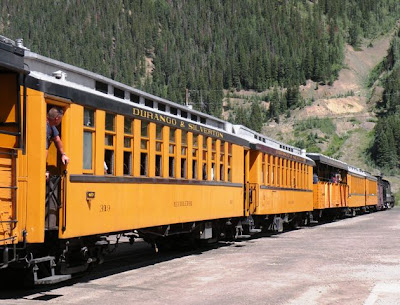 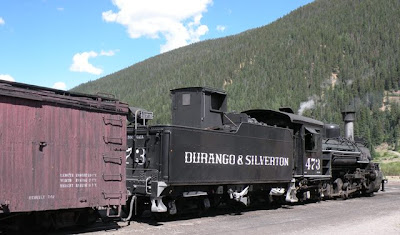 Followed by Heidi wanting to compare my Cowboy Beauty... to that of a Wooden Cowboy... 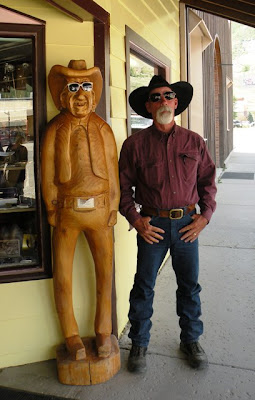 Whad-a-ya think? Have I got that combination of toothpicks beat?

On the run over Hwy 550 back to Ouray... I got teased by all the Mountain Twisties... and the other Bikers out enjoyin' 'em... 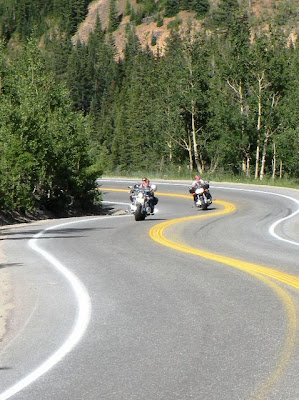 I'll tell you what... You want a road to put two wheels on and Ride!... 550 Between Durango and Ouray... is about as fine as you'll ever want to split the wind on! Hooya!

Time for me to get on back to work now... If I'm to be leaving for Alaska this weekend!

Help keep goin' RV Boondocking...goin' RV Boondocking!
Have you enjoyed your visits to my camp? I sure hope so. If you'd like to see what else I've written, you can follow this Trail to my "Bookshelf". Just know that any purchases of my lil' books and tales, helps keep me following the Trails of my beloved American West, collecting stories and yarns to entertain you with... and are Much Appreciated.
Many Thanks!

Return to the Home page of goin' RV Boondocking
Visit my "Ribbon of Highway" Blog on the Lil' sister to this site, Motorcycle Touring on Freedom Road
Posted by Brian at 8:59 AM

RE: the wooden vs real cowboy pic...
it's a draw, Twin brothers from different mothers! Hee Hee.
I Love it, and love you guys and your spirit and enthusiasm for risk in the name of adventure. We look forward to following, and eventually maybe even joining you on the road again... somewhere in deep in the woods around a campfire.

Hmm,which one is the wooden one? LOL! Seriously, I think that should be your profile photo over on your bookselling page (and we picked up all three for my Kindle...thank you!).

Will be watching your Alaska adventures closely...hope you'll be able to update us once in a while. Good thing Blogger lets you post from emails!

Now Brian, Just because you are realizing a dream of yours, we still expect pics and commentary on everything you see and do. all the good camping places and the great tent areas with your new "road horse". Can't wait to start reading about your great adventure.
Loved the pics and description of your and Heidi's adventure in Ouray. Spent a nice 5 days there back when mom and I were camping in Colorado. Beautiful area.
I presonally think you outlook the wooden one, I think your legs are a little more bowed. LOL

Take it easy when you start on your trip.

Think I got my electronic charging issues cleaned up too... just getting ready to pull out of Denver headed North to Nunn... a few days of prep and then Knees in the Wind!

Twins...separated at birth. "Wood" you believe that? Great pic!