Working On Fresh Ambitions and Controlling The desire To... Um... Respond...

Recently re-read a book "Flying Through Midnight"... there's a quote of a fella in there. They were meant NOT just in the particular situation they were in, but to address life in general;


"Break some rules, Make something Up. Do as you please. Pos-si-bil-i-ties."

Those words struck a cord with me when I first read 'em. It was a good thing to be reminded of them now. That's pretty much how I'm thinkin' goin' forward. I keep trying to do what I want yet still find myself "playing by the rules." It don't work.

The trouble IS... the RULES were wrote by a tiny percentage of civilization and spun for THEIR benefit to the cost of ever'body else. Worse, they've got real good at getting a person's self doubts to jab 'em good and hard whenever they go about pursuing any of their own interests that don't serve soh-sigh-uh-tee.

Now, I'm not talkin' 'bout dumpin' on anyone or taking advantage of anyone... less of course they're members of that tiny percentage or government; And THEN it's Open Season! :)

Last year and some, I got kind of stupid. Fell right back into the same old traps we all do. Got to thinkin' wrong 'bout most everything. Talked my self into things that turned out to be wrong and Built up a fresh pack of burdens way too heavy that gives too little back for the effort.

"I can see clearly now the rain is gone" :) Music always has a way of clearing out my brain pan__if I stop long enough to listen to it.

The future I'm looking at is "outside the box". It's austere enough it's even got ME spooked looking at it. Bwahaha. So that tells me I'm likely on the right trail... since the "System" works on us all to scare us away from doing what's good for us but Bad for the "benefits" it squeezes out of us.

Now all I got left is to cut away those foolish burdens I took on and Crack Out again!

Took the day off yesterday and made a circle through the north half of Yellowstone. Word is last year was a record for people there and this year is running ahead of that. I know for sure that there's more people than I've ever seen in the 50 years I've been wandering through there.

Takes a special effort to see through all that noise - and deal with it in socially acceptable ways.  Especially for those that are diplomatically disabled... like them such as me!

... from the__ahem__"foreign guests"__corking up stairways to take pictures of each other. Posing and RE-posing and posing again; While backing up all the people trying to just get on with their own days, who meekly accept such behaviour... and getting huffy when the old grump refuses to accept such rudeness and diddy bops right on through their picture...

...to the ruder mutts walking shoulder to shoulder across the sidewalk, laughing, joking, plowing along and pushing people off both sides; who get huffy when ONE refuses to get shoved to the side. Who just stops and squats down in the middle to photograph a small flower off to the side... forcing THEM to split around...

To the bikers, riding ten under in a four hundred foot slug of scooters nobody can pass... who get huffy when they come up on the "Pot stirrer" who goes even slower than them in his wore out ol' Dodge along the windy river... where THEY can't pass...

Wave and blow 'em a kiss! and thanks for saying I'm number one! That's what holding up that single finger means... Don't it? :)

Do Unto Others fools... most folks just duck their heads and don't want to "cause a scene"... Me? I am tee totally willing to Do Unto Them as scenically as possible! Just as their behavior requested! I'll even tip my hat and say; "You're Welcome!" :-D

But, you know what? I've come to realize that being in that sort of "stuff" and dealing the best with it is a lot like Photographic composition! Really!

See, to get a decent photograph you have to focus down on details and crop out all the rest of the BIG picture. That BIG picture is too much to deal with usually and just clutters things up, so crop it out!

The beauty is in the details...

So... dealing most efficiently with all those wastes of space is really learning to focus on the gorgeous details all around and let the "Useless Clutter" just slide on by unacknowledged... like an insolent kid you ignore.

Yeah... I might take a good photo once in a while... I'd not hold my breath waiting on the "slide on by" part to happen very often... hahahahaha. 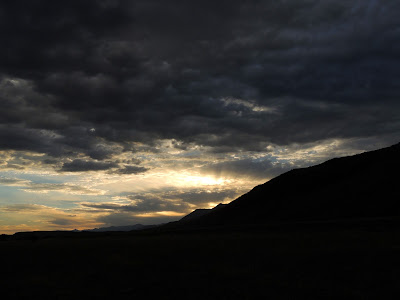 Had a morning that promised some awesome pictures. It dawned with a lot of "personality". Stormy weather adds so much to photographs... but alas, it broke off clear and I've not unlimbered the camera much in a while. My skills are rusty, but I got some so-so...

As the day passed along I did get better at just floating through the "noise" and letting it flow on by like it wasn't really there... most of the time. ;) 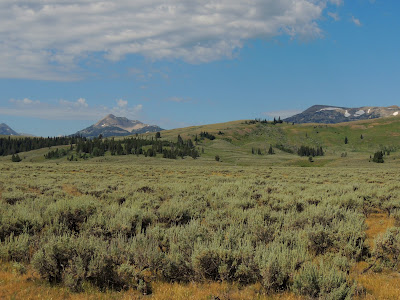 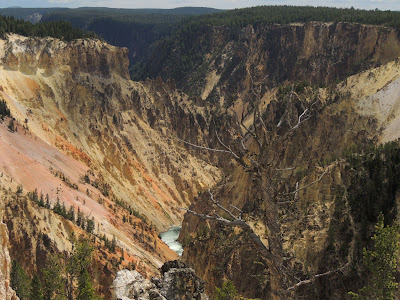 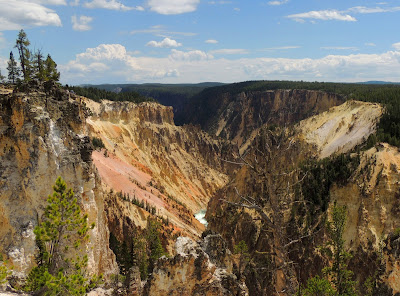 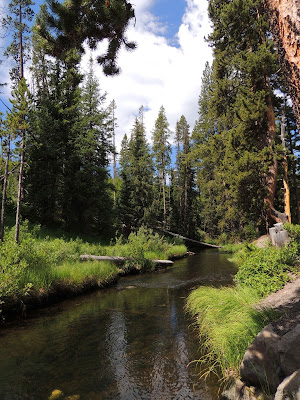 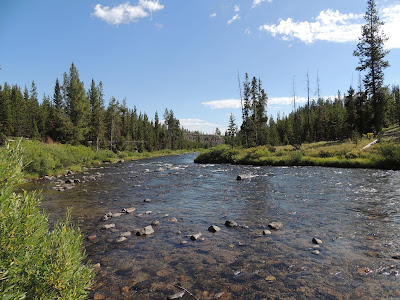 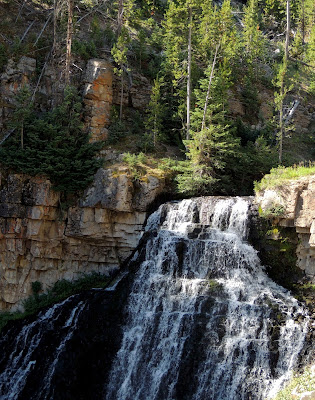 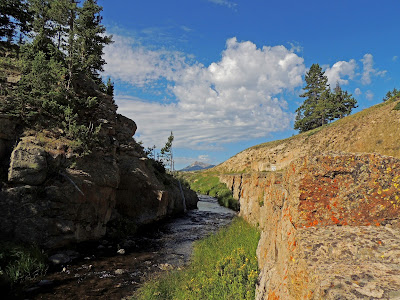 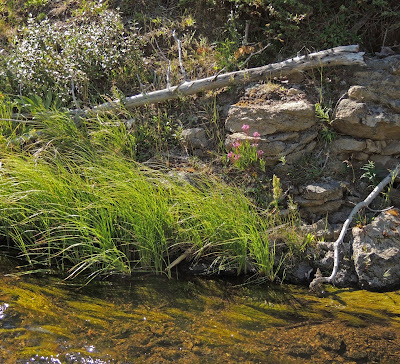 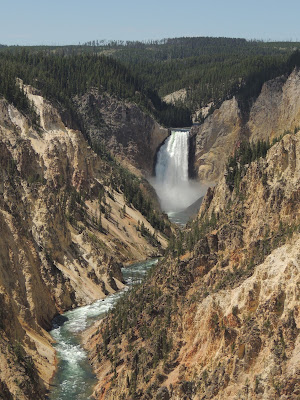 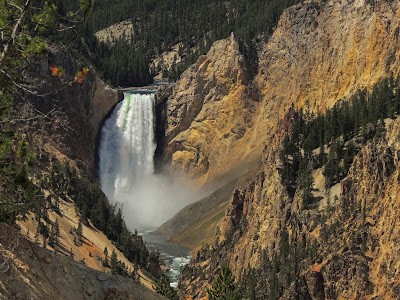 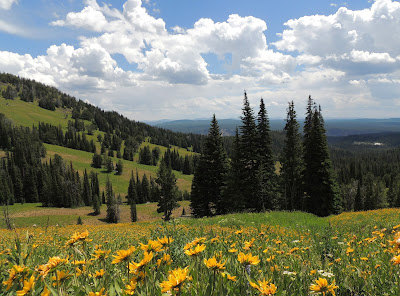 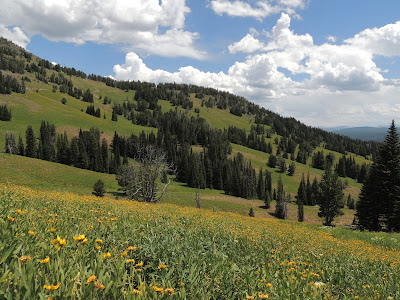 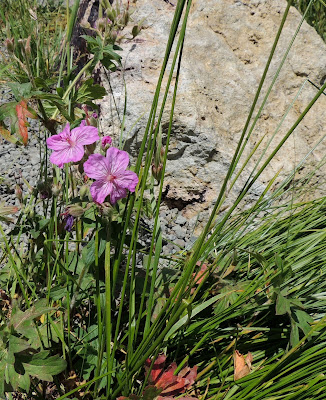 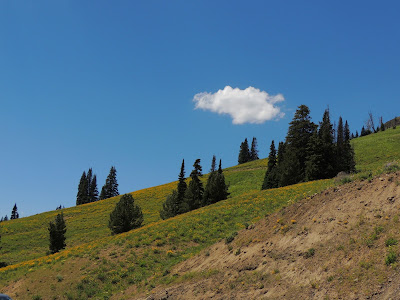 But when I was sitting on a rock just gazing out at the scenery and capturng this last photo I couldn't resist. I tried but I couldn't do it. Bein' a wise ass must just be a genetic thing. I sure have little ability to control it.

An old guy screeched into the little pullout I'd parked in and jumped out. He come stomping up with his camera in his hand and blurted out; "See anything?"

"Yup." I said and looked back into my camera.

"What?" he asked all excited looking around real quick trying to spot what I'd seen.

One of those 'Can't see the forest for the trees' sort of fellas...

I got in my truck and rolled slowly away... knowing I got it and he never will. 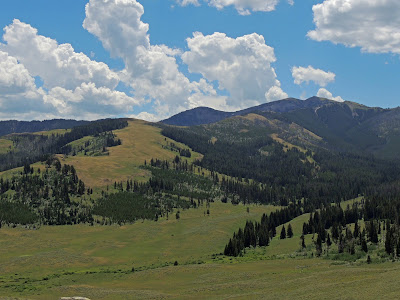 It's funny really. I get labeled all the time with grumpy, negative, pissy and several more colorful descriptions of what folks take to be my many faults. But there I am, soakin' up the joy of being alive in Montana and Wyoming... and some of the folks slingin' the labels are... pushin', shovin,' cussin' and nastyfyin' life... while the grumpy old negative bastard is smilin' and loving the day... It's curious to me...

Great photos and I loved your commentary about the people you ran into over the course of your day. I agree with you about people like that ... maybe that is why my hounds have turned me into a semi-hermit. :)

Lower gas prices equals way more tourist on the loose. One way or another you pay the price ;)

You certainly got some good pix Brian. Does take a little willpower to ignore those tourists and their selfie-sticks, who just want photos of themselves instead of what they're seeing. Saw a bunch of them in front of the Mona Lisa once, all with their backs to one of the best known paintings in the world.

CONGRATULATIONS BRIAN, Good to see you finally figured out which way the screw turns, and unscrewed right again, shows in your Photography! While you're "rusty", they still draw me back to look at them. Keep practicing, we'll keep lookin.

From a favorite song.

Signs, signs, everywhere there's signs
Fuckin' up the scenery, breakin' my mind
Do this, don't do that, can't you read the sign

And the sign says "Anybody caught trespassing will be shot on sight"
So I jumped the fence and I yelled at the house
Hey! What gives you the right!
To put up a fence and keep me out, or to keep Mother Nature in
If God was here, he'd tell it to your face, man, you're some kind of sinner

I was there two weeks ago. Had bear jams and buffalo jams as expected. But a traffic jams for a badger digging on a hillside and a coyote crossing a meadow was a little ridiculous. Half hour to an hour wait for a parking space at Old Faithful and a mile long parking lot along the road at Prismatic Spring tells me how crowded it was. I did the same thing as you, pulled into a pull out and just set and when a some one stopped just said I was napping and waiting on a wolf pack to show up. I got the same reaction, the people that stopped were pissed they wasted time stopping with nothing to look at.