When You're Stuck... Just Get Moving

I mean it. There is no such thing as "Writers Block" or any other such thing where you just can't "think"... Where you can't make a "choice".

The problem is not in your head. It is NOT sorting out the choices. It's Inertia. Once you get stuck you tend to stay that way, in Any.Thing. It's all physics. So the answer is Physics. Literally!!!

If you don't know WHAT to do... Do something. Anything. Just get moving. It's far far easier to change the direction of something that's moving, than it is to get that wagon with its wheels settled deep into the sand__Moving in the first place.

So, if your confusion (Inertia) keeps you from picking a direction just pick your foot up and go__any damn where__ just go. You can adjust your navigation once you get that mired wagon rolling.

Which is all the lead in for the last week or so...

Backing up a mite... here's the "Writing Shed" in Development. I set it just temporary all the way in back just to see how it'd work... 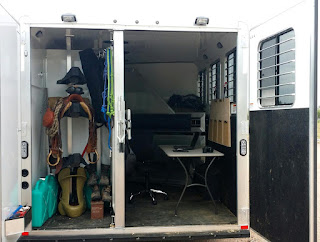 The planned place is all the way forward in the horse compartment. But that spot was blocked by all my junk.

You can see the balance of my worldly possessions and precious junk showing over the divider where it's piled up beyond my "desk".

How-some-ever, with my story board hanging, the table and chair set... I could see it is going to work fine...

Just have to do something with all that "Stuff". 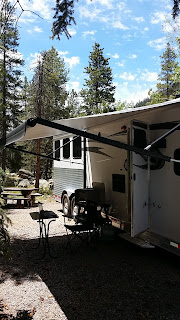 Yeah, so... There I am trying to get some work done in the Mountains above Gunnison... It was real pleasant sitting under the awning, stereo working easy... words flowing, breeze in the trees, sun shining... right up until...

Arlo decided it was his job was to make writing impossible out by Gunnision...

Keep him inside and he's bouncing off the walls... put him outside and he goes to barking to come keep him company...

Then the sun goes away so I move all that "Junk" shown above so I can put the "writing shed" in its "Planned" place.

Sitting at the "desk" while the rain falls... with all that noise going on and a million other things (inertia) rattling in my head I was just spinning my wheels...

So... working in circles and getting nowhere, jammed up on the story line... can't work on the generator for lack of "materials" and the rain... yadda yadda yadda... I hitched and hauled...

Yup... I got MOVING... right back to the front range where  I could at least have my good friends garage to work out of the rain and maybe get the gen set up. 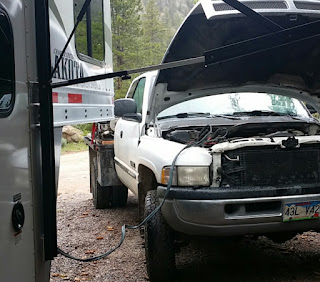 Using the Truck as an 8500 lb diesel generator to keep the batteries juiced was just kind of a noisy hassle...

Hassles are to me like one of those tiny lil' stickers in your sock that you can't find...


They make me friggin' Crazy! I. Hate. Hassles.

So it motivated me to get where I could do what I need to do to get that generator "up".

First night back here was not looking good. I pulled in right in the middle of another colorado summer storm... that sent the Poudre and the Platte out of their banks... I thought the Lakota would float away.

But that finally passed and I could gather some bits and pieces to cobble a generator mount together. 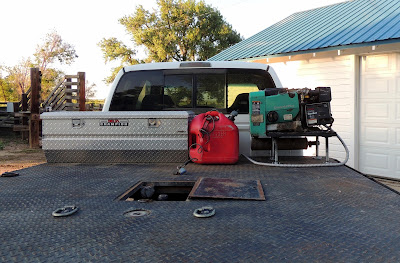 The first problem was that being a "motorhome takeout"... the exhaust system comes out the bottom. So I had to create a stand or a pedestal to clear that exhaust.

That'll be OK too actually because it gives me the space under to arrange a starting battery and a fuel tank... as soon as I can find one that'll work... but, the genny itself is bolted down solid and functional. Though I still need to fabricate the "Cover" that'll finish that mounting off, and a few other odds and ends.

The configuration of that Onan is a little odd. Everything slopes to the left. Called Cummins/Onan to ask about it... and their "Tech" hadn't any sort of an idea what I was talking about... great. (My opinion of "Experts" is NSFW... um that's Not Safe For Work!)

I'll likely shim up that left side of the mount, to bring the crankcase level... it loses about 3/4 of an inch the way it is... and considering that the oil drain is on the right side of the crank case, draining the oil would be a lil' problematical...

I suppose I could just jack up the left side of the truck when I change generator oil. bwahahahaha.

Well... the "Movement" did as hoped. As it always does. Just as soon as that last bolt got tightened up mounting the generator, the log jam in my head broke loose and the Finish of the book I'm working on came spilling out.

Taking my mind OFF that for a bit let the pieces and parts simmer and work...

And then CLICK! It came to me how to get 'em off the mountain. ;)

Didn't even take the time to fire up the lap top. Grabbed paper and pencil and spent the next hour drinking beer and scribbling down the ideas and words and recording the pictures in my head before they went away and were lost... so I can complete that work.

The rest will all come together, once you break that inertia.

Random and as Scattered as Ever
Brian

The definition of an 'expert' is: A has been drip under pressure.

Your writing shed looks great! This post hit home with me as I find myself almost daily in a state of confusion !!I work it out,for a bit,it tends to tag along with me and catch me again!!
Keeps things really interesting!!

Your writing shed looks great! This post hit home with me as I find myself almost daily in a state of confusion !!I work it out,for a bit,it tends to tag along with me and catch me again!!
Keeps things really interesting!!