How Can Time That Seems to Drag So Slowly... Race By So Fast?

I got here at the end of March... Been the longest period of time I've set in one place for... five years now I believe... and honestly? Sitting in one place don't fit me.

It never has, but that dis-fit has been polished to a high shine these past few years.

So... it seems such a long time  but yet now the end of this time is racing up hard and fast. Gonna have to haul out sometime mid September to get up to Sydney to repeat the beet piling job...

and there's PLENTY that has to get done before then. and plenty has been getting done...

Number one now... or two... depending on how my Itch works out... will be getting the roof coated. I say maybe number two, because I may just have to take a week or ten days and put the bike in the wind to straighten out a few kinks in my brain...

That roof coating as I'm sure you know got brought to a halt by the swarm of wasps that wouldn't let me be... My bug tent seems to have solved that problem... until the night before last anyway... the buggers came back with a vengeance.

I was trying to sit under the awning and enjoy a cool brew when I noticed a straggler paper wasp heading into the furnace vent. Shortly there were two... and as the afternoon wore on more and more...

I tried running the furnace to chase them out... but when it's 85 or so... having the heater blasting at 90 makes things a mite unpleasant inside... and all that seemed to do is stir 'em up... 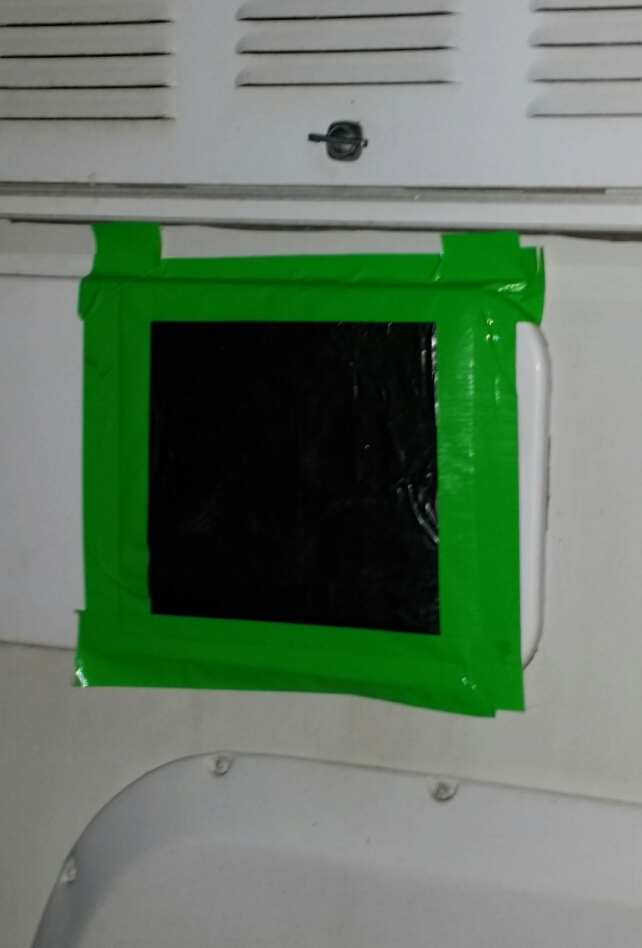 So... I did what any self respecting drifting biker cowboy would do when harassed AGAIN by the noxious bowlegged varmints... I went inside and sipped another brew while I waited in ambush for darkness...

When that arrived I broke out my lil' roll of plastic and some flashy duct tape and trapped the suckers.

It seems to have worked... I've not seen a single buzzer in more than a day... I think they're all IN there. Ha Ha Ha Ha... pester me ya yellow butted bug eating galoots! Come heater time up north... or along the road somewhere I'll pull that trap door off so the furnace can run again. :)

While all that was goin on... or just before, I dis-remember... I finally got my scooter back together... and honestly I've not a single idea how. The second tube of the forks, with a special pro tool, refused to go together.

I struggled and strove with help and without... and Nada... So the other morning just after dawn I walked over to the garage to make one last solo effort before nuking it with an impact wrench... and once again failed... arrrrrrgggghhhhh!

I stood for a moment scratching my head and then picked up a wrench to "Check" how easy a part turned (for no particular reason)... and it wouldn't turn... but it should have... What the Hell?

I grabbed the torque wrench and CLICK! when it SHOULDN'T have... WHAT THE HELL?

I checked this and that and all seemed Right. It wasn't together... and then it WAS and no explanation how or why or any durn thing... I took advantage of the weirdness and filled the oil, put all back together and then over the next two days put 400+ miles on her "testing"... and all is right... so... OK... I'll take it!


So now... back to the jobs... I also need to R&R the brakes and bearings on the fiver... and the rear brakes on the truck... and the crack in the windshield is starting to look more like a canyon, and really needs replacing... then there's a few other odd bits and pieces that need doing... looks like my skills at stretching green paper are gonna get a work out ;)

...and I still have a few sprinkler heads on Evin's farm to move... no rest for the wicked...

...and just to pester me... the road, and Sonja, keep calling for several days of my knees in the wind... so the next six or eight weeks, if my count is right, should be busy...

A lazy man trying to be ambitious
Brian
Posted by Brian at 7:36 AM

It's been a week with no updates... Did the wasps win?