Nice sunny day on the two lane in Montana... 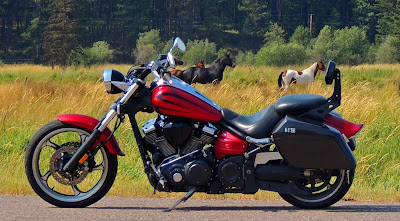 ... even if my wheel was still on bass akwards. :) Couldn't miss this bit of Deja Vu. Captured two of the major forms of transportation that have made an imprint on my life.

And, keeping both of 'em shod seems to be a recurring theme in being involved with either variety.

I left with plenty of time to find the shop and got there a bit under an hour early. Either somebody'd cancelled or some tech was really zooming on his work, 'cause they rolled her right in and got the work done. That's kind of an unexpected thing when you get any mechanical work done!

Kalispell might not be a real big town, but the roads are still a bit busy at rush our. When I left the shop with my new rubber mounted... and turning the right direction this time ;) ... 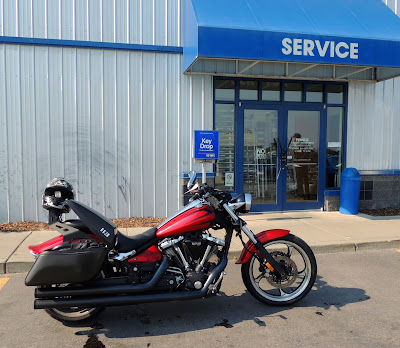 I ran across town to do some quick shopping for some paper for a project I'm working on... and a bit of Walmart supplies. Not a whole lot... you can only fit so much in the trunk of a Raider... but you know... since I was over there anyway a little voice whispered Wally had a few sixpacks of a local Ale on the shelf. ;)

Then it was BACK through the Montana Rush Hour and roll on south... through a second rush hour.

The service manager at Penco power sports had warned me that hwy 83 running south was Bad, his word, with deer.


The trick is to ride fast enough that you're already past 'em before they have a chance to jump out in front of you! ;)

The truth is, on this ride I got a lil' bit more of an education. I've never held real hard with the argument that loud pipes save lives that some fellas make. Always figured that if the "Cagers" couldn't hear and see an 80,000 lb semi... they weren't gonna see me either.

Last evening, rolling south under the Montana sky I had occasion to witness a couple of white tail's standing just off the shoulder of the road... they stood real upright, craning their necks,k straining to look my way, before they jumped back away from the road...

... it sure appeared to this open mind, that my pipes had warned 'em of my approach... and turned 'em back... so... that argument still lives...

Got back with my groceries, my ale and my Journal Paper (I'll show that in some future posts on that project/simmering idea) in time for supper and the last cold brew in the fridge.

Today or tomorrow I'll manage to complete the first editing pass of Shadow. Sometime today, maybe when we take a Montana backroad truck run, I'll stop at the lil' lumber yard in Seeley Lake and see if they've got what I need to fabricate a stitching frame...

Then I'll have to spend the next few days before our mystery meet outside of Kalispell (just after the first of the month) building that stitching frame, and starting book #3 of the Jensen series as well as book #3 of the Taylor series.

So... though I don't seem to get where I'm going as fast as was planned... I do always end up somewhere.

Keeping One Foot in Front of the Other
Brian

I've done quite a few runs on SR83 to and from Kalispell. Great road in the daylight, terrible at night. I've had numerous close calls with deer on that road back in my Freightliner days. Only rode it once on the bike and I made sure that was a daylight run.

As for loud pipes; I wouldn't bet on them. The deer and other critters didn't seem to mind the noise of a rumbling Freightliner or even the air horn.

That one was a fawn, maybe two weeks old. His momma was teaching him how to play in traffic.

I managed to hit the binders hard enough to only pop him goin' maybe a mile and a half an hour... and knocked him down. But he jumped back up bawlin' for his momma.

Otherwise... I guess I've got an internal radar... or a guardian angel that's wiggled be through 'em without close contact of the THUMP kind.

Ok cowboy. Now I'm sure not the sharpest tool in the shed. I just learned from you that ducks don't have lips, but how is it possible, and why would you, put your front wheel on you bike the wrong direction? All this stuff is beginning to tire my brain out.

acheapguy; Well... you don't do it on purpose. Motorcycle tires are built directional.

They HAVE to turn the proper direction or there's a danger of 1. The tread splice failing from torque against it improperly.

2. The water dispersion in the rain is all mucked up

3. Tread wear because it's running backward can be accelerated

4. With the Tread operating in Reverse the grip of the tire can be degraded badly.

The sad part is that it took me so long to "catch" that the thing was backwards.

The Yamaha Dealer in Phoenix had put the tire on the wheel correctly but then MIS installed the wheel itself backwards. Since this bike has double rotor on the front end it's easy to do if a guy isn't paying attention... ;) But then... you HOPE the guy riding it notices before luckily the tire wears out too fast without coming apart or dropping him on his head in a rain storm! :)