The Fourth of July on the PCH.

The day dawned clear and calm. They've been doing that here, and when they are you need to get jumping... 'cause shortly, that Ocean wind will return.

The day before we'd gone out to the North Jetty... The wind was racing like it was trying to imitate Wyoming. 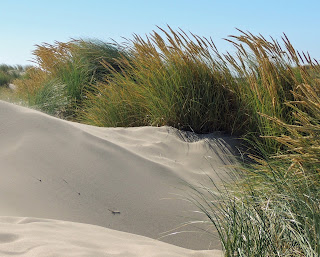 The grass was bent over in the breeze and the sand was flying.

I could only get one pic... the sand had me being cautious.

Back in Bandon I'd gotten enough contamination in this Nikon, it started sticking.

Took me a couple hours of working with a can of  "Air" and careful cussing to get her loosened back up.

We took off about mid morning just going north, no real destination. That big Yamaha of mine ain't bullied by no Wind! We rolled through Yachats, Waldport and then Newport, buffeted by the breeze.

Along the way I pulled into a couple of widespots to remember the day. 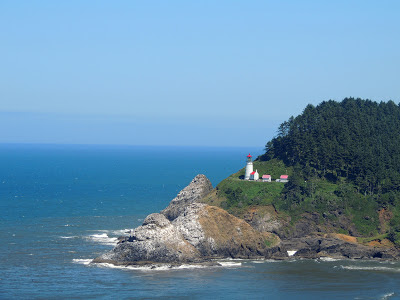 The first was at a spot overlooking the most photographed lighthouse in Oregon. The one that sits on Haceda Head.

Just to the right of it sits the beach where, a couple of years back we'd seen hundreds, maybe a couple thousand even... of sea lions on a stormy morning in late October... I can't believe I didn't capture a decent picture of that... 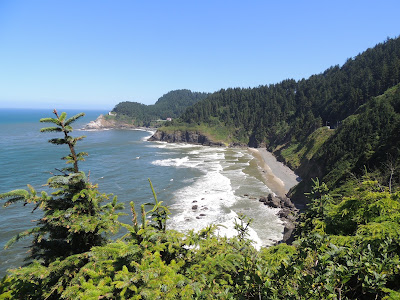 ...just imagine 75% of that small, gravelly beach... covered, shoulder to shoulder, nose to flipper with sea lions. Heavy surf rolling in. BIG waves. and Rafts of Sea lions, 20 and thirty in a bunch coming and going from their haul out beach.

The second spot was a ways farther up past a few of the glorious winding twisties of the PCH. 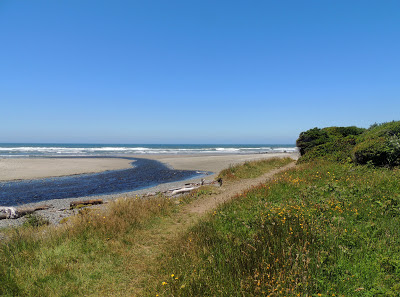 A short walk out a grassy trail, to a rocky beach. A few small tide pools amongst the rocks... 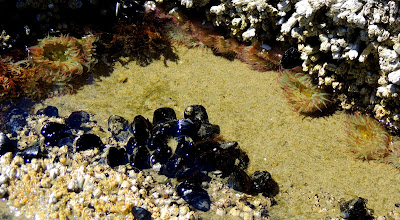 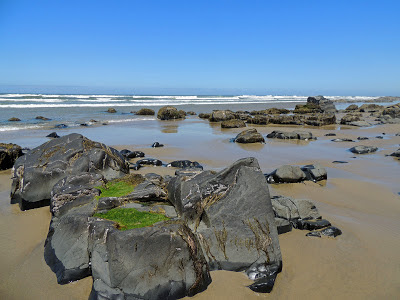 But down there by the water, that north wind was cool, even in my leathers... and isn't it curious how a cold wind seems to chase the morning coffee through you quicker?

So... needful of a "rest area" we climbed back on Sonja and rolled on to Newport for the blessed release of public Facilities... and a good lunch at a lil' cafe along the bay.

Then it was roll back south in time to get the dogs taken care of, so we could get into old town Florence early enough, to park the truck close enough, that it'd not take a four day hike to get to the boardwalk for the 4th of July Fireworks show.

We found a spot laying in the grass alongside the marina just a couple of hundred feet from the barge from where they launched the missles... they did a good job of it.

Then... it was walk back to the truck... and just sit in it for twenty minutes or so... rather than fight with the, oh... I don't know... ten thousand others? All trying to be the first one out of the lil' burg of Florence... after the fireworks.

Today... I think'll be another day of building more of "Shadow on the Mountain" the slowly coming 2nd story in the Ben Jensen series...

Tomorrow... is tentatively, putting Sonja in the wind again to Eugene... for what's been billed as a really Big, farmers market... We'll see what dawn looks like. ;)

Living Free, thanks to the Warriors Who Did the Work
Brian

Just love hearing about adventures on the Oregon coast, and seeing pictures from the same places I once stood. Thanks for sharing.

I've just come across your Blog and as I start to read I'm almost there looking at those beautiful photo shots. Glad you shared.

Forgot to mention a free spot. BLM has land out on the North Spit near North Bend.
Just before you hit the bridge is the Trans Pacific highway which leads to the NF area's dunes ($). Drive past it about three miles and on the left is the BLM boat loading area. Good, clean, well maintained area. Picnic tables, boat launch, beach.
Now if you go past it about quarter of mile, the first dirt pull off area you see (with BLM signs) is where they allow free RV overnight camping for 14 days.
That area is the staging area for hiking the BLM lands (and for horses), not for OHVs.
FREE. Gotta like that.