Casino Camping a New Trick for an Old Dog

Casino Camping, the way we're doing this week is a bit of a change for us. While we've used Wally World lots for years; as well as roadside wide spots ~ literally, spots along a two lane just wide enough to get the rig off far enough to not end up with an insurance claim! and quite a few rest areas, for Overnight Parking, we've never set up in one with the intention of laying up there for a week.

This spring is the slowest we've wandered... EVER.

In the past, running from Arizona to Washington by way of California and Oregon... that run has generally been made in two weeks or so... We thought we simply couldn't handle the cost of traveling along the coast...

Boy-O-boy was we wrong!

We left Arizona, diving off into the desert of Death Valley and on up through the Eastern Sierras back on about the 18th of March... and so far, some three and a half months later, we've only made it half way up the coast of Oregon!

And... we did it while digging our way through a major cost failure in Lincoln, California.

Our costs for our nights has been some of the lowest of our whole journey. All the way from $5 bucks down to ZEE-ROH.

Where always before, we'd mostly only managed to see $35 a night dry camping spots, $35 state parks in Cali... yadda yadda yadda... so we "raced" on through...

... we, now that we opened our eyes... or was that my mind??? we've discovered a whole slew of opportunities for the dinero challenged yonderer.

We've done this by stepping out of old habits, listening to small tips from readers and acquaintances along the way... and on many occasions... just wingin' it and letting our freed up instincts lead our noses.

So... here we are set up in the far fringe of the Three Rivers Casino parking lot. 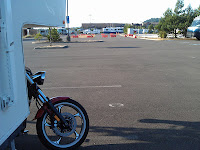 The parking lot is nothing special...

... but it's spacious and security is strong with patrols, lights and cameras...

This part of the world is not the place to just go rollin' into a campground the week of the 4th of July... thinkin' you'll have no troubles finding a spot...

Now... I'm not gonna blow sunshine up your skirts an' tell you that this is the most plush and luxurious of campsites... you wouldn't believe that anyway...

BUT... I am gonna tell you... that if I ran out there with a tape measure... we've got more room here... it's usually farther from our rig to the next...than it was in that truly beautiful State Park back at Honeyman! ;)

A real nice feature here, that we've done little of in the past, so it's kind of a fun change up... is having the casino up there to walk to.

The first night we signed up our Players Club cards. That gave us $10 bucks each of "Free" money for the slots. Then we strolled over and had an excellent Monday night supper that stretched my belly and cost us all of $16 bucks plus a tip.

The next night we strolled back up... gave 'em our email address... and collected another $10bucks each of "Free" money on the cards. Ok... so you gotta put real cash in to use the "Free" money... but they reimburse you on the card as you play...

Last night we walked up to the Aces bar in the casino where they were gonna have a couple of comedians perform.

Again, being the hold nuthin' back, wild and wooly, BIG spending High Rollers in the place... I bought a $4.50 beer... and Heidi Selected a glass of soda... that the bartender refused to charge me for...

People, ya can't get any better than that! Aw, we'll go up and eat again I'm sure... maybe even twice! and... there's a small concert with an up and coming country singer Friday night, so another Beer is likely... The Three Rivers Casino won't get rich off of us by a long shot... but we'll sure try to respect their generosity a lil' bit. ;)

There's more than one way to get a job done. If your old ways ain't workin' snoop around and take a chance on something new.

Asphalt Camping for the Holiday
Brian

One of my fav casino lot spots is Three Rivers. You might be able to see the fireworks tonight from there, just look out toward the river (think it is the river).
Also, down old town is the Marina where they have free, open to public showers, estate sale building, and Portwifi is free to public. Might make it easier to upload images. I know my Verizon wifi sucks in some cities and the port's is rather decent.

I always look at the Casino parking lots to scout what ones I might want to use come the time I'm boondocking. There is only 1 so far that I know of - Argosy in Kansas City - that doesn't have room for semi's and RVs. When I was driving the big moving truck through St. Louis and caught up to an ice storm I ended up parking the huge truck inside the basement of the parking garage at Ameristar and it was big enough for Class A RVs if they wanted. Here in Phoenix I know of a half dozen casinos with large parking lots.

As a Nevada native, I've learned casinos in general are quite generous. Getting you in the door is half the battle for them. Free entertainment, cheap food and drinks and free RV parking lure you in. But if you can keep from gambling, it's one heck of a deal.

Enjoying your journey. Keep up the excellent posting.

I have to admit I love the camping at Three Rivers Casino in Florence.

2. The Waterfront Depot is a yummy and beautiful place to eat. The halibut is especially good. If you sit at the bar, the bartender will give you "samples" from the extra cocktails he's made.