Oregon Tips the Scales in Favor of Disabled Vets

We've been dawdling along in northern California and southern Oregon even slower than what's become usual for us from a shortage of diesel... and... 'cause we were waiting to see if our new Card would show up...

...and it finally got approved and caught up with us. 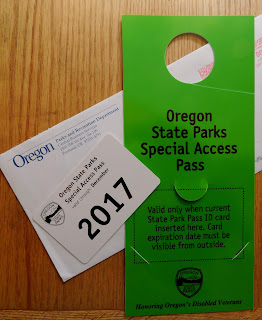 I know several states have programs to benefit Military Vets in their park systems. But all I've found until now have been strictly for Vets that are residents of that state.

Oregon has done the others one better.

They created a program that gives Disabled Vets ten free days a month in their State Park System. The one better is that this gift is for ALL Disabled Vets, of any state, not just their own residents.

The only stipulations are the disability must be service connected and the stays are available a max of 5 days at a time.

You can stay longer than the five days but then you pay full rate. If you move to another park you can take the remainder of the ten days.

I'd heard about it some time ago and just didn't pursue it. Foolish Me! After being reminded recently by a reader, I sent in my paperwork and the Card came today.

Thank You Oregon! Your generosity is sweetly appreciated.

Though our long term preference remains boondocking back in the woods or out in open country... in the thick and steep terrain of the Pacific Coast, those State parks are a gift for us, for sure and for certain.

We love to camp right on the coast, but there's only a couple of National Forest Camps and at $24 bucks a day and more, those other available camps are too pricey for us to allow a leisurely trip down the coast. We've had to move fast to get back to the places our budget would allow.

Ha! We was wrong!

Now that we've found the reasonable priced camps inland in California, a few BLM camps here in Oregon, and Now the gift of Ten Days of State Park use a month, our Coastal trips can slow down, stretch out and get Sweeter!   Utilizing the Oregon State Parks that are now more easily available to us, thanks to the generosity of Oregon, along with the USFS camps we know of... combined with the inland BLM camps we're discovering... The cost of a coastal migration for this wandering biker cowboy is no longer prohibitive. Suh-wheet!

While we were keeping our fingers crossed that the card would be approved and show up we took a lil' stroll up to the top of the hill where they'd built a Coast Guard Lifeboat Station back in 1934. It's just out the north end of Port Orford.

But the directions didn't make sense to me... Seemed to me that a Coast Guard setup is gonna need boats for a life boat station. ;)

Does that make you scratch your head too? A lifeboat station... on TOP of a hill? Sounds like typical bureaucratic thinkin' don't it? Actually it makes sense once you find out the particulars.

This part of the coast had wrecked more than its share of boats I guess.

So, they built a 30 some foot tower on top of that hill and manned it 24/7 to watch for distress flares out at sea ...  :) Their boat house from where they'd mount their rescue operations was in a small cove at the bottom. The boat house burnt down a long time ago, and the tower was taken down when they closed the station in 1970.

The only thing left are the buildings that housed their barracks, which is now a museum for what they did. We got there just as the museum was shutting down for the day... so poor me only got to stroll along the trails through the forest on top of the hill. 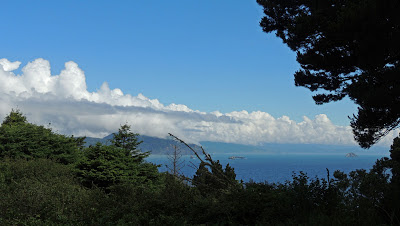 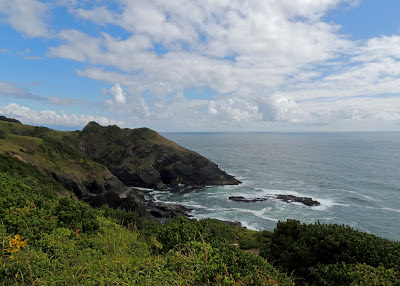 The state is trying to change the name of the beach from what its been called... to something the indians named it... but... since I can't spell that :) I'll just call it Agate Beach like ever'body else does.

We've spent several hours there, hunting agates and have captured a nice lil' collection. I say lil' 'cause though plenty of Agates the size of goose eggs have come off that beach... we've only found 'em the size of humming bird eggs... from small humming birds... with calcium deficiencies. ;) 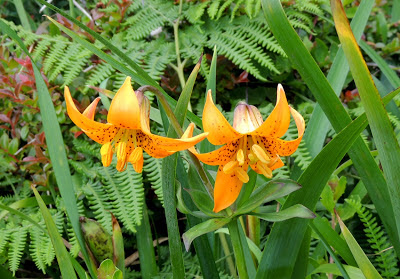 Pretty nice view from up there. There's a rock off the northern end of the cape where a good bunch of seals were sunning in the... ahem... sun.

I tried to take their portrait... but from my vantage point they just looked like a lot of hairy sausages layin' about in the sun.

We're making another bump north in the morning. Hoping to find use of our new card at one of Oregon's camps just north of Coos Bay. Seeing as our timing for running out of days here in Port Orford is bumping into the weekend and that weekend is in late June... our fingers are tightly crossed that we'll find a nice spot to pull in for another few days without severe difficulty.

The real problem is that we've found long camps are tougher to break than short camps... Gravity has a way of spreading junk out when it has more time to work on it than short or overnight camps. Camp goods flow outward like thick mud.

Packing and Stuffing
Brian
Posted by Brian at 12:00 AM

That's an amazing benefit for veterans traveling in Oregon. Kudos to the state for providing that nice perk for those who bravely served our country!

I have a couple of vet friends I'm going to contact and let them know so they can apply to this program.

That is a great benefit, enjoy some more of that coast! I hope to get my cowboy out there this fall.

The Oregon pass you now have is a pretty neat deal! Gives you a lot more opportunities to enjoy Oregon. The Oregon coast is a great place to spend the summer...just to get away from those HOT temps in most of the U.S.

Oregon, sweet Oregon. Other states could learn a lesson as to how treat our Veterans. Just make me love that state even more. Enjoy your stay.

Don't know if they meant it to happen that way... but the "park pass" will result in us loitering a lot longer in Oregon.

The consequence being that we'll likely leave a lot more of our meager revenues behind when we finally do leave. ;)

Even if we don't stay in the high dollar spots... we still need groceries, diesel, and BEER! Not to mention the odd doo dad or hardware bit. ;) So the state's economy gets a huge benefit from me. At least $7.36 a week or so ;)