Repairing the Truck and the last of Bodie

The alternator smoked a short ways from camp... so we ended up making the day on the Bike. What we should have done to start with. Except for the fact that the alternator likely wouldn't have croaked until we're making our camp move in another couple of days... so we'd be ON the road with the whole dang rig.

Soooo... that it turned up its toes before we'd got far from camp was a good thing considering the lack of on the road tribulation we had to endure... made better by the fact that that Napa Auto Parts warrantied the year and a half old thing 100% yesterday afternoon.

And of course, me being me, the one receipt that's vanished from the truck parts file envelope... was the one for the alternator... But the West Yellowstone NAPA came through for us. They found the sale on their computer and faxed a copy down to Mammoth Lakes so I could get the warranty! :)

That's an example of why I deal with NAPA and Discount Tire... Just about anywhere we are I can find one to take care of any gremlins that crawl into our camp.

Which lets me finish up our Bodie trip.

The Bodie cemetery rests on a low rise overlooking the town. We look in quite a few of the old cemeteries. They are a window into the past... if you look.

Stop for a bit and contemplate on what you see in these old burial grounds... you can learn a lot more about the people who lived there... and a bit of the struggles they endured. You can get a subconscious feeling for who they were...

It helps a person gain some perspective on their own difficulties.

Something that jumped out at me in Bodie was a truly sorrowful thing. I vow, it seemed like half the monuments were for children. 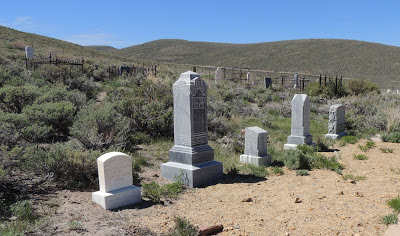 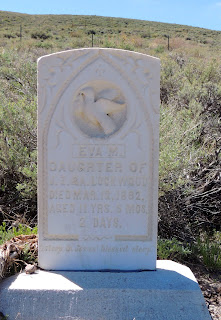 A thing that really cut deep was how many of the memorials revealed that mothers had lost multiple children...

... often within days of each other.

I didn't see it spoken of in any of the papers I saw...

But Bodie seemed a hard place for young folks to grow up... 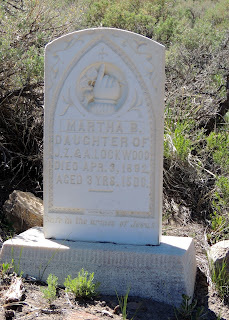 The thought of losing not a single child but pairs of daughters...
That's just a thing I don't even want to think about.

But that happened here.

From what the cemetery reveals... an all too common thing.

The dates of their loss seem to cluster in a few rather narrow time periods. It appeared to me that there was an impact in Bodie of the great flu epidemic of the 1918 period...

It seemed like another couple of time periods saw a big spike. 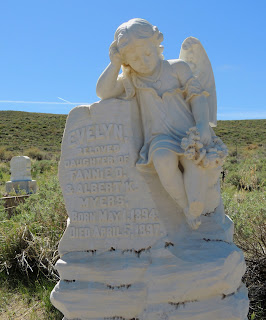 Those gravestones would seem to show a great sorrow...

But that's Not the feeling I got walking around the remains of the town.

The words are hard for me to line up.

In a town where so many parents lost their children I didn't get the feeling of lost hope and crushed spirits.

The newest and youngest of the markers was for a man who passed in 2003!

His family apparently honored his wishes and placed his remains in Bodie.

The thing you feel here... if you've opened up that part of you to pick up on it... is that even though the people have gone... moved on... this place holds a sense of community... a piece of them still survives.

I've walked through other ghost towns and could only feel the rough and tumble of a mining camp. Saloons, brothels, jails...

Here, you see school houses, churches, fire stations... layers of flooring and wall coverings... they show an intention to last. It's a completely different feel than the rough and bawdy camps... You get the feeling that the people who lived here, despite the sorrows that occasionally fell on them... saw this place as Home...

I've read where many people, many cultures feel a spiritual connection with a certain place... that no matter where they go... where they live... there is one place, one piece of ground that is their Spiritual home ground.

I believe that for many... Bodie is their Family Home... 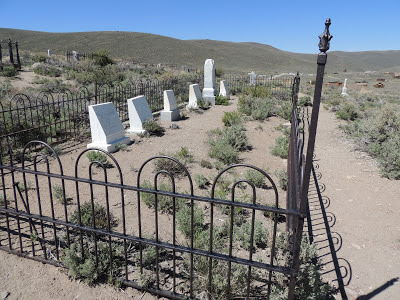 Generations are buried here. They show a bond to this place. It gives a man pause and something to measure himself against.

In another couple of days this old gypsy will be blowing in the wind once more...

Toward the Far Horizon
Brian
Posted by Brian at 9:39 AM