Yesterday we went to collect a few jugs of water for camp... and ended up doing something between 5 and 6 miles of high country walking.

As pretty as the eastern Sierras are, that beauty is real often difficult to capture on "film".

Like yesterday, we were walking in what most might call dark timber. The trees were so thick it's hard to get any perspective to capture a decent photograph.

It's times like that you have to focus in on the smaller bits of the whole scene.

Pretty much the same as the Grand Canyon. It's just too much to put into one photograph, so you have to sort out the small bits you Can get your head around.

... and then try to find a way to record that small piece to remember the day with.

Often, that sort of country, like we walked through yesterday... is my preferred landscape. There's a feeling of safety... when shrouded by timber so thick you can't see thirty yards.

Don't get me wrong, open country, far country... stretches your soul. It feeds the hunger to travel to that far horizon... to see what lays beyond it...

But... the trade off is... out in that open country... you're exposed... there's no where to hide, no where to retreat... It's like you're committed with no going back. It can be intimidating. That's a feeling I had alone on a motorcycle on the Alaskan Highway, deep in the Yukon... Committed... No Going Back... 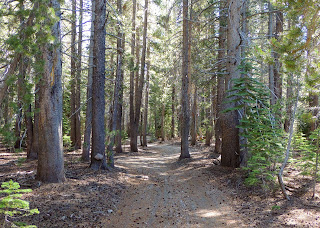 In heavy forest... where you can slip away unseen in seconds... there is an ethereal feeling of safety and seclusion.

It does my soul good to know that even in California... where your first thought is often the MILLIONS and MILLIONS of people crowded together in a huge megalopolis...

... that just a short run away... is deep forest where your soul can catch its breath... Secluded from the hordes and clamor.

So... we were headed back from getting water for camp and decided to check out a couple more of the Free NF campgrounds in the area, to see if they'd been opened up yet...

***now that's a paradox of sorts. The NF service allows most of its sites to be badly over priced... and then has a gob of actually sweet camps in this eastern Sierra area that are FREE! ... it would be a whole lot better if they'd just find a happy medium... like say manage their camps Themselves, like the BLM, charge $8 for ALL of  'em... and send the Mgmt. Corporations packing? :) plus, they'd get a greater return that way to boot!***

Well, back to the Walk... So... We ended up 4 wheeling up Deadman Road... to a point where the road narrowed such that a Polaris Razor might be comfortable on it... but not an 8' broad, wide butted Dodge flatbed; so we got out to make a short walk...

You walk a short ways and say; "Let's see what's around the next turn" 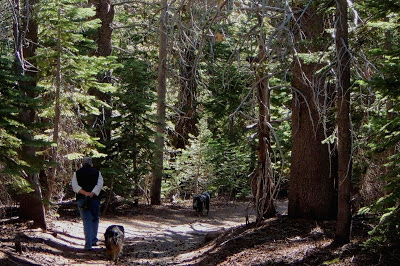 The forest absorbs the turmoil in your head... your breathing slows... a strange feeling of serenity and belonging seeps into that space behind your eyes where thoughts tumble without being put into words. 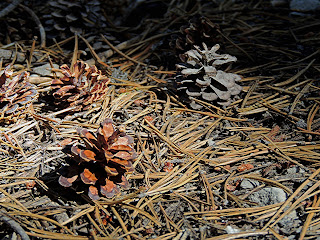 Should a man be sad that it took him so many decades to find the "place" in this life where he belongs?

Or should he just thank his lucky stars that the life he's had... has taught him to treasure so dearly all the shining bits and pieces?

To not regret the crushing sorrows, and shattering fears? ... but to acknowledge that it was those moments that create the contrast that makes his todays so clear in their treasure. 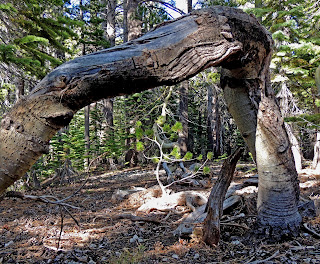 ... parts of it are bent, broken, burned and shattered... but it struggles on...

Remember the old saying... "you can't see the forest for the trees?"

There are great areas here that from ground level look only like huge areas where mining tore things to hell and then the people who did it... left...

I'd wondered how could there be a big enough market for obsidian to justify such a mining effort.

The places look like the ugly scars of mine tailings dumps as you pass by...

Yesterday, while trying to figure out just how far we'd actually walked (left the phone and its tracking app in the truck... doh!)...

Heidi pulled up a google earth pic that revealed the volcanic truth to us!

We were driving along that lil' dirt track along top edge of what is actually a volcanic crater... and I'm thinking it's an old mining waste dump! ... DOH!

The point is... stop and look around... There's often a lot that you're missing with too casual a glance. 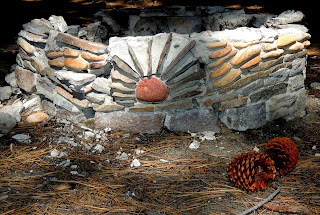 Also found along the way...

A fire pit in a campground...

...built by one of those camping there...

Just treasuring the bits and pieces... "a glass of buttermilk, a soft bed"... following the wisdom of my Ol' buddy Gus. ;)

So... today I gotta get rolling... heading off for an Anniversary breakfast and then some ghost town site seeing... and likely an Anniversary lunch too... if I can find a drunk to roll! ;)

Another Day in the Sun
Brian
Posted by Brian at 9:43 AM

Looks/sounds like a great day and a great place to be camped.
As you re-work the sites, have you had much of an opportunity to get that list of past camps and reviews whipped into shape?

Hi Brian, Haven't talked in quite a time. Just want to say congrats on the 34 years and hoping for 34 more. Jim and I celebrated 40 on April 19th. Got one day late mother's day present--Daughter and grandbaby came to spend 10 days with us from California. Lordie, I sure do love that little girl, but she wears her Nana out. LOL. Love the new form of your blog. You did good my friend. Keep on driving and posting.

Luv the new look! I've missed reading your posts for a bit. Finally finished up selling the house and the downsizing... Have been gone since last Wednesday. I'm luving the freedom that you so often write about. Follow along... I would appreciate your wisdom e and advise. avintagerollingstone.blogspot.com

Congratulations on 34 years. Hell, lots of people haven't been alive that long! Isn't that a thrilling thought. LOL