One Day Follows Another 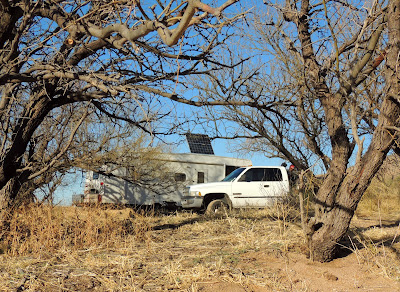 ... and it's that infernal TIME that is the culprit that cooks up the majority of my difficulties.

Goin' down the road my senses are occupied by new sights, scents, sounds... watching folks and just feeling the wind in my face. It's likely why I'm the most comfortable and laid back in the summer time...

When winter rolls around, the weather tends to slow down the wandering... since maybe two thirds of the country I admire is buried under snow or at least temperatures which my old bones can no longer abide!

With that reduction in wandering... and the things drifting keeps my head busy with... comes the unused time that allows my brain pan the space to cogitate on and weigh all the possibilities; cooking up new schemes gahr-ahn-TEED to produce smoke and sparks and some squirrel-crawled-up-your-jeans hoppin' and squealin'.

Sometimes I succeed in fending off the really good ideas that so often prove out to be more akin to; What in the Hell were you THINKIN' Boy? die-zaster-us conflagrations.

So as serene and quiet and healing as the Far View camps like this one seem to be... 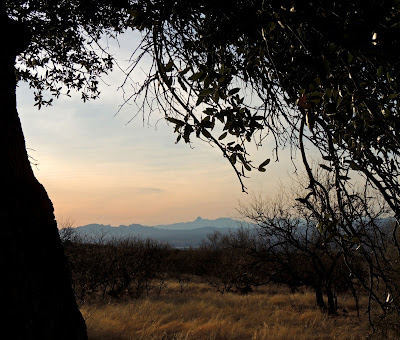 I've gotta maintain my guard. That Ol' "What if we..." schemin' sneaky bugger is always prowlin' about... hidin' just 'round the corner somewhere... or maybe under a rock...

After stringin' a thousand words or so... took a break from my literary pursuits yesterday afternoon... It was getting on toward supper and I was needful of refreshing my head after a day of fictional disputations. :)

Just below our camp... and back up into the Mesquites a short ways above the road we discovered what some in the desert call a guzzler. 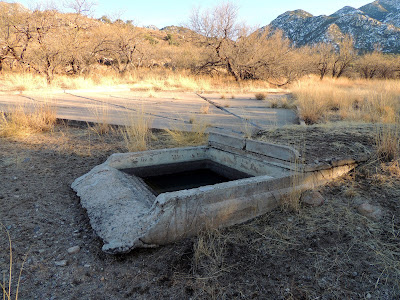 Arizona Fish and Game built a concrete apron that collects what water falls out of the sky, and likely a bit that comes down the drainage above it, and directs it into a buried tank.

The access to the water is at one end with the rest covered to reduce evaporation loss. There's a corrugated ramp up out of the tank so any small critters that manage to fall in have a way of climbing back out. 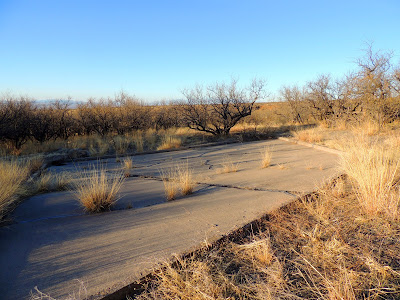 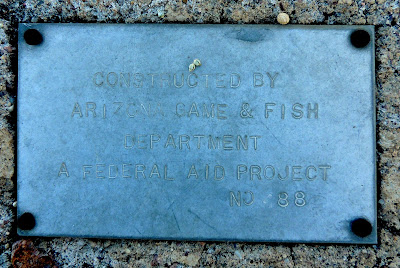 Hmmmmm... required Federal aid... Ya know, in the "Old" days... the Ranchers who held the grazing permits, built... on their own nickle... wells and stock tanks, all across the ranges. No state aid, no federal aid... they just did it to improve the land, the range and to care for their stock.

As a consequence, the deer, javalina, coatimundi, cougar, box turtles, toads, birds... every critter on the range benefited. Now... it takes Federal aid... and the Mesquite and the brush, without the balancing affect of cattle, sheep and goat grazing (which replaced ~ buffalo ~ grazing... but is being steadily cut back as un-natural) moves in ever faster, with even fires restricted, choking out the grass and creating ever more plentiful and grievous fires...

Grazing and fire is a part of this land... always was... always will be. Though we can impose our short sighted will for a time... the "system" which dwarfs our own understanding, will re-assert its command... over our protests I'm sure...


Just below the guzzler are the footprints of folks long gone... just a few concrete foundations of people who once lived on this land... They had a fine view... Their living here sure don't seem to have done any damage to the land...

Maybe, it could be argued, with an intimate relationship with the land they lived upon... they protected and nurtured the land that supported their families?

We'll be here a short while... and then move on. Unlike those that went before, the only sign of our passing left behind, will be washed away with the next rain.


You know what would be a fine epitaph for a man?


"He was a man of many faults and conflicting passions...
yet he still managed to get a few people to stop... and... Think."

A Stop Along the Way
Brian
Posted by Brian at 11:01 AM

Brian, as a former BLM RAC member, my direct and real experience was that "the most real caretakers of the land" were ranchers. They knew what they were doing because their complete livelihoods depended on it.

One hundred an eighty degrees away from their sage morality were the ridiculous, progressive fools that support or were the demonic leaders of today's Eco-crisis Corporations (Wilderness Society, Sierra Club' etc.).

I'd enjoy seeing that ilk lined up neatly, as I only have a 10 round clip!

You're a little young to be coming up with an epitaph for yourself. Hell, I'm old than you!

Don... There's a big differrence. ONE of us makes a habit of splittin the wind at "that boy is crazy!" Velocities AND goin around pokin all the badgers he can find! :))