Being the tough nut Colorado Storm Busters that we are... we BAILED when another storm threatened in Madera Canyon... What can I say... the idea of fighting Arizona gumbo mud to escape our RV boondock camp in the mesquites outside the mouth of Madera just doesn't hold the romance it once did.

Soooo... we bailed for a night camp at the Wally World Resort at Cortaro Farms Road in Tucson...

They've added new amenities at some of the WalMart RV Resorts... 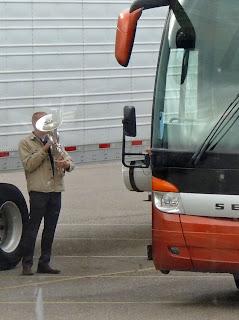 Oh yeah, Walmart thinks of everything to accommodate the cultural needs of the People of Walmart! :)

Like morning serenades on the asphalt by itinerant horn blowers! ;)

Had a bus load of traveling musicians stop for a coffee break as we were climbing out in the morning...

You never had THAT in your Thousand Trail campground! :)

We got moving fairly early and pulled into the Catalina State park... and of course, as it always is... it was full.

We needed the place to park for a couple of nights for a family visit... so we sucked it up, got out the Vaseline and backed her in... 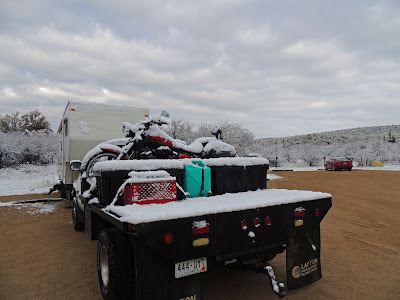 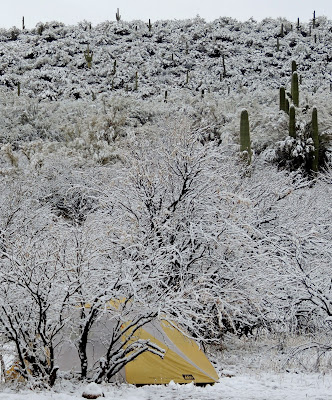 You have to understand... the folks in southern Arizona get kinda hysterical when stuff falls out of the sky. If you get enough snow fast enough so that there is an actual coating... like 1/4" over the asphalt for, oh, say seven minutes? THAT is a blizzard! :) ... the town comes to a screeching halt! The schools are closed... the National Guard mans the intersections and the Governor gets on the phone to FEMA and the President;

"Yes sir. I KNOW the Russians just got hit with a meteor ten times the power of the Hiroshima bomb! But sir! You don't understand! IT SNOWED! There is actually SNOW on the CACTUS! The SKY IS FALLING!"

Yesterday afternoon we started moving toward Avondale and our NASCAR commitment. Turned off I-10 south of Phoenix to roll out through Stanfield to the casino at Ak Chin.

That's another way to find free night camps for those unaware. Casinocamper.com.

Of course... I immediately got into difficulty with the Casino Security. :) We were strolling around inside just a lookin' and the guard walked up behind me; "Is that a knife?"

"You'll have to leave sir."

Yup... don't get caught with that inch and a half splinter whittler in your pocket! :)

Took all of five minutes for Heidi to disappear her ten bucks. Myself I was rollin' along over an hour later, still playin' poker on their dime when her patience wore out and she started punchin' buttons... and my ten bucks disappeared too... harumph!

Well... the Free Supper required waiting in line for an hour and a half... so that didn't happen... We're gonna try and be in line early this morning to take our free meal at brunch before we pull the last few miles to the track...

So... if you're needing a safe overnight stop on your journeys... and Horn players at Walmart aren't your cup of joe... try a casino lot... Free is cheap... you might score a gift meal and some "play money" as well... and they generally have security in the lots... Just be sure to exercise Proper, parking etiquette.

Movin' on down the road
Brian
Posted by Brian at 7:51 AM

You criminal!!!!
The knife, and the fact that you didn't lose any of your own hard earned money at the Lost Wages Casino!!
Box Canyon Mark