Africa By Way of Tucson

The first Tucson Gem and Mineral Show Heidi came to was I think 16 years ago. Been to every one since. They come here to by a raft of goods for the store and have a big "Trunk" show when it all gets carried back to Fort Collins and sorted out.

Actually it's not just one show but actually a few dozen scattered across town. The city is pretty much taken over by folks hawing pearls, big chunks of rock, fine glass and  finished stone beads and every bit and bauble you could attach to the Idea of Beads, by a good tight stretching of your imagination.

One area Heidi liked, even after the market for that style of beads faded in Fort Collins is what they call the African Village.

It's an area of three long aisles of tents set over on the west side of I-10 near 22nd street.

With the weather threatening, we took a stroll through the tents and got a flavor of African art and culture... even if I don't have any sort of an idea is meant by the masks and sculptures and symbols. 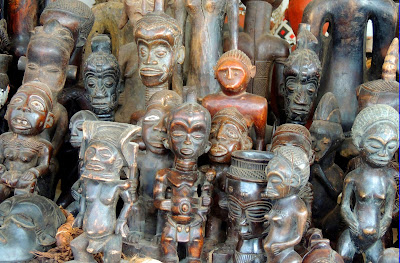 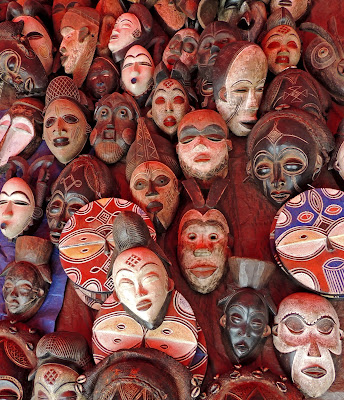 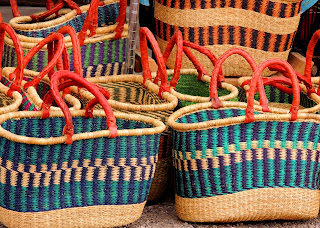 Wheres's the Beads??!! Ha Ha... There are tents with PILES of Beads... Tiny lil' seed beads and... some that weren't what you would call small! 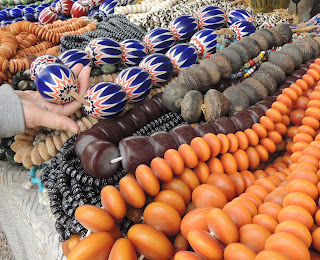 The Chevrons Heidi has in her hand are actually used as beads I guess...

Though most of the beads you see are referred to as African Trade beads, they were made in Italy specifically for the African Trade. They were used as currency back then. Kinda like two beads were worth a goat kinda thing.

The darker, rough looking beads to the right of her hand are spindle worls... used as counter balances for drop spinning. 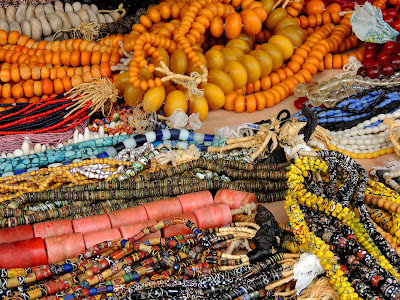 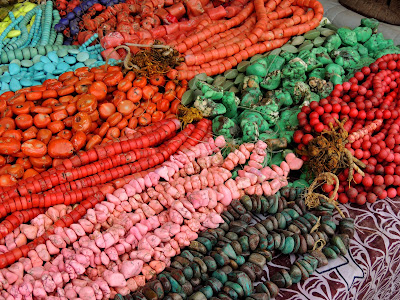 A lot of the "Old" stuff used to be gotten by raiding graves for trade goods. Kinda creepy huh? There's one old legend, don't know of its truth... but it goes like this; Because of the Trade Value of Beads, there used to be an island in Italy where they put all their glass bead makers and kept 'em there... so Other countries couldn't bribe 'em to come make Beads for them! Let's see Snopes check THAT one! ;)


I know one thing... everywhere you see African "Art" you see a heavy emphasis it seems on masks and different sorts of sculptures that usually have some sort of warrior or fertility significance... or so it appears to a pussgut old biker cowboy. 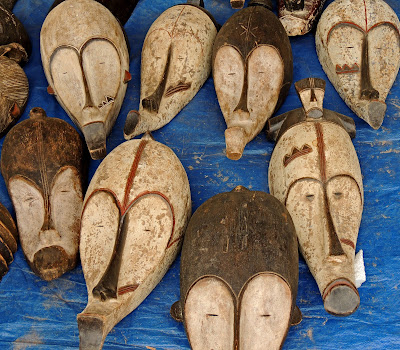 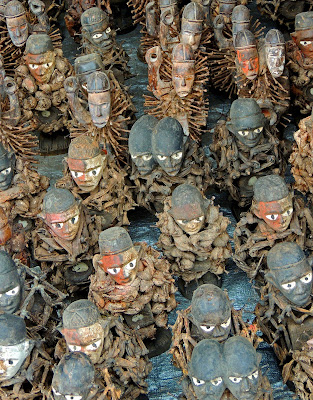 There's a tent there where you can get some African Quisine. If you ignore the air force jets passing overhead, and the freeway going past in the distance...  and kinda close your eyes and drift... you can almost imagine...

The scent of the dust... and the melodic chatter of the people around you. You could almost feel the village in Ghana, or South Africa, or Kenya...

There were three men, one lounging easily in a folding chair, hands in pockets, ankles crossed, calm look on his face; Two others standing. One each side facing him, intense looks on their faces, their voices raised in the excited chatter of their Home language...

One standing man kept grabbing the seated man's shoulder as his voice rose to make a point; while the second standing man leaned in from the other side chattering and jabbing his finger, trying to make his point...

There was heat in the conversation. It was clear and plain to anyone paying attention.

The seated man finally just raised his hands and said a few quiet words... and the two excited fellas just quieted and backed off as the seated guy slowly stood and walked off to another tent... His status above the two was pretty clear. It was one of those "Interesting" tableau deals.

For several long seconds, from the tone and tension of their voices I thought there was gonna be a difficulty... and then... pffffftttt! I was a fly on the wall... and didn't have no sliver of an idea what was bein' said! ;) 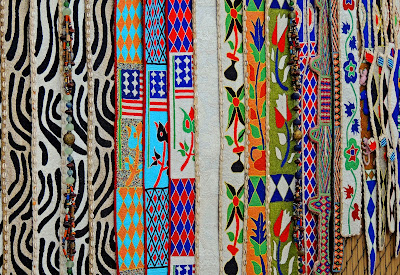 This man was carving something, no idea what. I watched for a bit and using my tilt monitor ;) covertly captured his portrait as he worked... 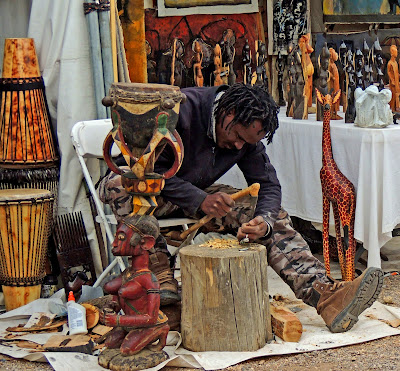 For fabric people there are yards and yards of African Mud Cloth. There are statues, sculptures, paintings. You find food of the area and language... all the benefits of travel without the risks of going to Africa! ;)

Which is likely a good thing for a guy unable to keep his opinions to himself most of the time. :) 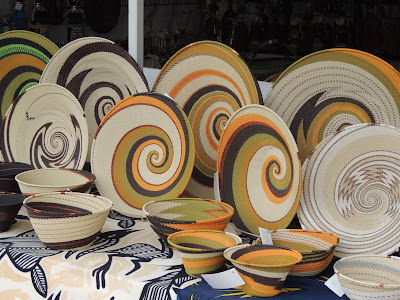 These baskets are amazingly intricate and colorful... don't you think? and guess what? Some African fella... or maybe fellerette... figured out how to weave them up from Phone Cord! yup... it's all insulated wire! Though... if you look close (you gotta be there) there are, here and there bare copper woven through in small detail here and there... 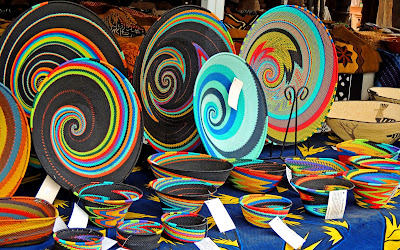 But the entire creation has been done by a basket weaver using phone cord wire. 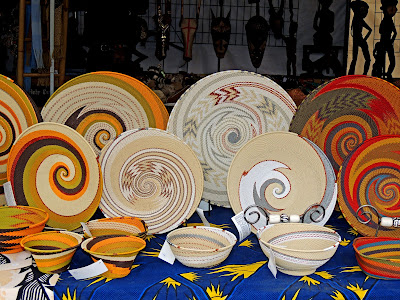 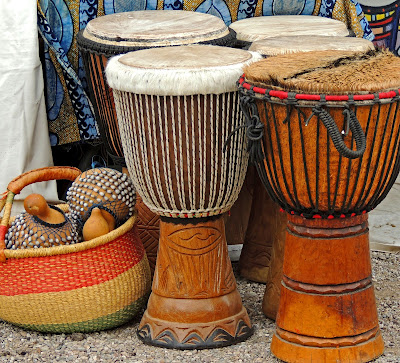 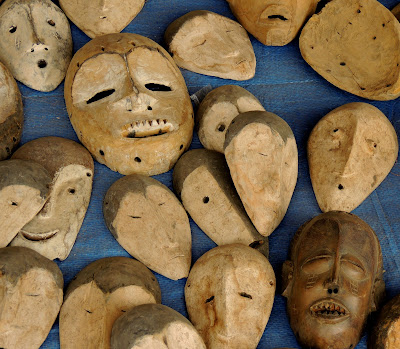 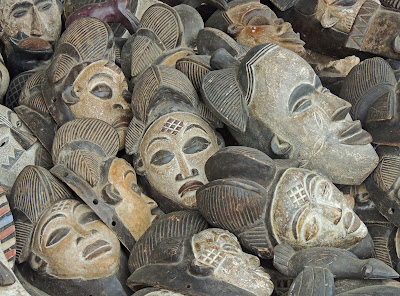 We were going to go check out the Reid Park zoo... but fighting for a seat for lunch at in-n-out (no real good idea why we done that... or real idea why they're so busy? The food is ok... but sure not to die for...) and sitting with our "quick lunch" it started raining...

So we opted to make a quick supply stop at wally world and then return to the rig to do a few chores in prep for leaving our current spot on the morrow...


The boondocking around Tucson, in my oh-pinion, is kinda sparse or un-appealing... There's a small spot out SW of town going toward Ajo... but it just really don't toot my whistle. We've been thinking about dropping down to Madera Canyon for a few days (GOOD spot)... but to be honest just now... the increase in altitude there, and it's attached drop in temps (with the weather the way its been)... just doesn't tickle my fancy...

The parks are, plain and simple, too pricey for such as me for the most part. Sorry, but twenty bucks a night for Dry Camping in a county park just seems a bit steep. Hell, for five more bucks a night a guy could rent a cheap (spelled r-a-t h-o-l-e!) apartment! It all just seems a touch out of whack to a penny pincher like me.

Buuuut... We've got to set up somewhere for another 11 days or so until we need to be in Avondale for to work the race. It makes no sense to go very far with that in mind... soooooo...

We're in a bit of a quandry... the result being we're gonna go ahead and extend here another day, paying nigh on to apartment rent ;) while things dry out a touch. ( I hate packing up in the mud and wet!!!) ... With any luck some inspiration will tickle my compass and a direction to go will occur to us. ;)

...or I'll toughen up and laugh at the chilly country that those Ouray conditioned hikers take as routine! :) and go to the only decent boondocking anywhere close that makes sense for our I-tin-ur-airy.

Just another day in the West
Brian
Posted by Brian at 9:36 AM

What a great tour of the African event. Amazing pieces of workmanship! Hope you get dry and warm and able to move on and boondock again. Yes, it's tough to pay those rates when you have your own power, your own water, your own bed and equipment. I see your point.

Makes me miss Tucson. The food at Beyond Bread is real tasty if you get a chance. Sorry it is so cold otherwise I'd recommend Chirachuhua National Mnt. and the Buffalo Soldiers' Museum at Fort Huachuca. (Been away so long I've forgotten where all the "u"s go in those spellings.) Sending you warm wishes.

I wonder what sort of dreams you will have after attending that event!? Hope you picked up a kool blow dart for food hunting in the desert. I traveled with out the 5ver and am a $25 rent...What entertainment i have with a $5 lady of the night/day...non-stop. I guess you always learn something..safe travels. BiLL

p.s. gotta love the city but boy do i miss my rig...Why didn't anybody tell me how addicting having a rig would be!?..BiLL

Brian--boondocking around Tucson is incredibly tough and the high priced parks aren't worth staying in. Have you thought about the Wickenberg area for boondocking? We can lead you to some great free spots and the Escapee's park has CHEAP full hookups, too, if you are a member.

Sounds like its time to visit Cholla campground again. Can't beat $3.00 a day even if you figure in the diesel.

Love seeing the African village. I actualy was in an rv selling stuff at the African Village in 1995. Not sure if it is still the same one you show here or not. But, what a wonderful time it was and boy did i get some great deals on beads at the time. Was wonderring about if it was still going strong.Looks like it!!! I hope to stop there again when I get rigged up to travel fulltime again.