You're supposed to go SOUTH when it gets cold... Right? I think I'm doin' this back'ards!

Took longer than I figured to get rollin' come the dawn. Got up at Zero dark thirty, after another night of desert rain... squeezed the truck through the narrow gate (8' 6" truck... 8' 8" gate!) in the dark (W/O hitting anything!) and headed on down the road... about a half hour after I'd planned.

By a bit after dawn I was into the bad road approaching Flagstaff up there at 7.000+ feet. That last thirty miles of the first hundred and fifty turned out to be the worst road of the run... and provided the best chuckle... I'm sorry, guess it's a mean streak... but when I see a TOW truck... with a crunched car on it... and the TOW truck is slid waaaaay off the road stuck in a snow filled ditch... my dark side comes out! Muhahahahahaha! ;)

Made a fast stop at the Flagstaff Walmart for some fresh wiper blades ;) a jug of washer fluid and another cup of road coffee...then shake rattle and roll.


My Plan worked out pretty well... When I checked the weatherman's Prog- Naws- ti - KaShuns... it appeared that if I went the usual I- 40 to I-25 up through New Mexico... I was gonna be racing direct into the worst of the storm as it crossed those northern plains and Raton pass, North of Albuquerque... and probably all the way from Gallup...

So... I opted to take the north western route across the Navajo Nation past Kayenta and up through Utah to cut east just north of Moab... and run down I-70. If my cal-cu-lay-shuns worked out well... I'd slip around behind the weather...

Now... that don't mean you completely avoid those other folks who insist on driving clear outside of their talents... "But Officer! I've got FOUR WHEEL DRIVE! I can STILL go 75 mph! I have FOUR WHEEL DRIVE!"

The evidence was 'round about fairly often of the fallacy of four wheel drive. It gives you a lil' better steering control... but in the end... if ya'll is countin' on it... What it will do is; Get you STUCK... fifty feet farther in! :) 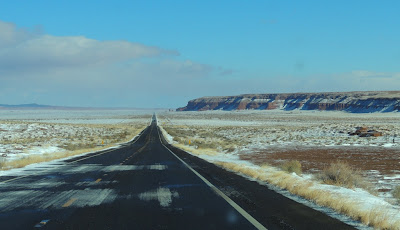 Once past Flag I had sunny skies most of the way. Lots of ice patches here and there... and in the darker canyons it'd get kinda slickery... but for the most part... a non issue. The roads were wet/thin ice at 14 degrees much of the way... but a lil' common sense will go along way...

I might be... uh... an eccentric, opinionated, cranky old puss gut biker cowboy... buuuuuuuut I still know enough to not put the radio on the side of the bath tub!!! or put my makeup on drivin' down the two lane!

So, with Sunny skies and clearing roads, in spite of the wind...

...I rolled the 800 miles give or take in 16 1/2 hours. Flagstaff, Kayenta, Mexican water, Blanding, Monticello, Moab, Grand Junction, Glenwood Springs, Vail... and down out of the mountains... 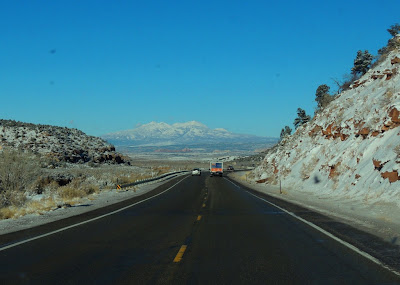 Right there with Flagstaff was the last part of the I-70 roll... Glenwood canyon was iced up and COLD! ... below zero... it hit -8 here and there along the way... the climb up through Eisenhower tunnel was slick and packed... with a few hundred trucks pulled over to chain up...

The old Dodge was struggling to keep it's heater ahead of the chill... I almost stopped and put my vest on. The cab was getting a lil' cool when I looked up and saw -9 on the thermometer! But... if you're rollin'... best to just keep on!

Bottom line... winter drivin' ain't that difficult... cut your speed... keep coffeed up... soft hands and softer brakes... watch out for the uncoffeed bozos with Four Wheel Drive! ;) and Shake rattel and roll!

Coolin' Out in Denver
Brian
Posted by Brian at 9:19 AM

I'm so tired of that drive from Cortez to Flag...
It's long and boring enough in good weather.
Box Canyon Mark

I've seen so many 4 Wheel Drive stories that it never fails to amaze me that they STILL go in the ditches without passing on those stories to NEW 4x4 drivers..Duh! Its ALWAYS funny to go past 'em and laugh and point. LOL
And a tow truck driver, too??? Toooo much!! LOL

Here is Utah, when bad weather strikes, the 4 x 4 drivers seem to think they are invincible. After all 4 wheel drive means they can stop better than a 2 wheel drive; WRONG!
Sure saw plenty spun out in the ditches on my way to work.
Bill

Glad you made it safely. Feliz Navidad to you and yours.

So glad you made it there safe and sound. Merry Christmas to you and the family.

Wish you'd been able to get a photo of that tow truck! LOL That would be funny. Glad you made it safely. You're right about low and slow being a lot smarter in nasty conditions.