When the Weatherman Says Go... Sometimes You Should GO!

Yesterday, we took a hike up around the end of the ridge we're camped up against and up the drainage on the other side.

I collected this pic as we climbed up over the ridge coming home... much to Heidi's discontent ;) and just before this sunset...


We've been watchin' the weatherman's reports for a couple of days. He kept sayin' it was gonna get less than prime 'round here. Buuuuut I've been waitin' on one of my lil' checks to get put in my bank... so I could hop on the bike and run over to Escalante... where they've got one of a certain brand of "other" bank so I could just pass it on. :)

So... this morning that deposit was confirmed so I rolled the Raider off the truck and hopped on to ride east into the sunshine...

Riiiiight up until the point I turned around and headed back... and rode through the misty rain and spittin' snow... buuuuut I broke back out into the sun again, so all was well... outside of it still bein' durn cold at 65 mph!

Well, we'd been talkin' of pullin' out a day earlier than we'd planned. Heidi's weatherman been sayin' a low of 13* Thursday night!!! and mine was sayin' only 28* ... still gettin' chilly for my southern lovin' bones.

Thought we'd take a walk when I got back from the bank run... and consider our options... so we walked south around the end of the ridge again... herself refusin' to make a rerun over the top ! :)


It's a pretty valley over there. The bottom is filled with that Giant sage that stands 6 foot tall and better. Down through the middle is a deep cut dry river bed that shows signs of bein' pretty nasty in rainy weather! 8 foot deep sheer walls and not so many places to climb out if you got caught down in there in a gully washer!


Not to mention plenty of evidence of how silly it'd to go strollin' along the top ~ too close to the lip! WHOOOEEEE! a carnival ride. You just have to hope you land on the top!

We went pretty near as far as yesterday... after all the sun was shining again... right?


And like i said, it's a pretty valley so a walk through the sage is kinda nice... 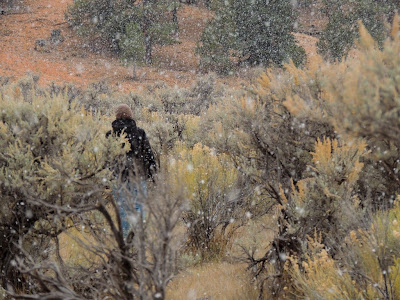 Just a few more steps and it was beginning to look like we've hung around this camp toooooo long!

'course... as soon as we crossed back over the riverbed and made the turn coming around the end of the ridge nearing home... It was back to blue sky. If you don't like the weather in the west, give it twenty minutes, it's likely to change.

But it purty much made the decision for us... Camped up here at nigh 8000 feet the nights are gettin' cold! Back down there in Zion, near 4000 feet lower, bald headed old busters can sleep without the furnace turned on! ;)

So,come the dawn, we'll roll back south again for our last visit in Zion while we wait to see if the Box Canyon crew makes it south 'fore we have to run for our NASCAR commitment.

Headin' South Again ~ Before the Winter Snows Arrive in Force
Brian
Posted by Brian at 9:18 PM

Well it's gorgeous country that can get kind of mean to old bones.

Here in Yarnell it was sunny and 67 when I pulled in this afternoon. Of course that's only 5000'.

We're on hatteras Island, NC, waiting to see what the weatherman says...which way will Hurricane Sandy move? Should we stay put, or should we go?

Gaelyn; That's why I keep them fancy long johns around :)so I can enjoy the gorgeous country a lil' longer... before I go racin' for the southern low lands! :)

JeanMarie; Hmmmmm... since I swim like a light weight bowling ball... I guess you can guess my answer! ;)