In Utah is a Hidden Canyon

We've been to Zion quite a bunch of times now... and there's still plenty of hikes we've not taken and plenty we've not done the whole route! ;)

Heidi ain't truly fond of high narrow places... and a touch of vertigo makes things interesting for me! People look at you funny when you're hanging on the chains wobblin' and weaving. :) I've learned to mostly wobbly and weave the right directions at the right times. Ha Ha!

... and like that guy on the North Rim said; "Life is better on the edge."

I've heard the Indians say that Ravens are a bad omen? ... I wonder what a Woodpecker is when you're just leaving the rig for a Canyon Hike? 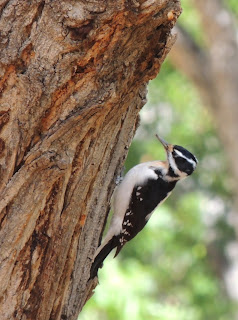 That Ol' cottonwood must have been fairly buggy. Lil' Woody was workin' it over for at least a half hour 'fore we left.

I gotta say, I don't have a high fondness for Woodpeckers.

Back on the ranch in Cherokee Park one of my battles was maintaining a set of cabins that was under constant assault by a team of flickers... Some looked like they'd been chewed on by a chain saw.:(

and it bein' a Federal Offense to use extreme prejudice on the wood choppin' buggers makes defense a difficult proposition. But, I did however finally succeed and routed the noisy peckers! ;)

We got on board to head up canyon. The tram let us off at the Weeping Rock stop and up we started up the mountain... 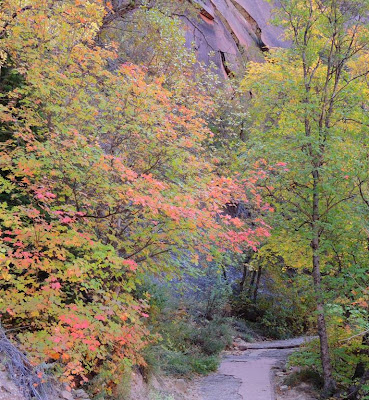 The Canyon is starting to change color this week... All up the trail you walk past bare slick rock and then through leafy retreats hanging on the cliff face... 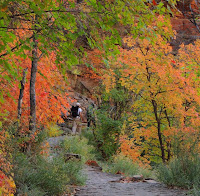 We stopped in one spot for a bit; having a conversation with a young couple that were climbing up to observation point...

I'm not one for crowds, not even a little... but... the people you meet on high trails are generally the best sort... too bad we can't figure a way to get them to "run the show"!

They have a truer and more balanced view of what's proper and balanced. Maybe that's what we need! Like for the army... a "Political Draft" ... Draft Hikers and Wanderers for two years service... "This won't fit in a rig... can't afford that... Can it!" Ha ha... 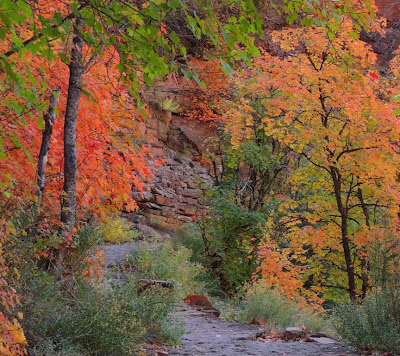 The first part of the trail is easy enough if steep. But from my perspective, it's wide and secure... Heidi might have a differing opinion though... gauging from the bruises on my hands. ;) 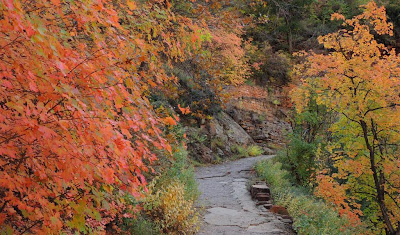 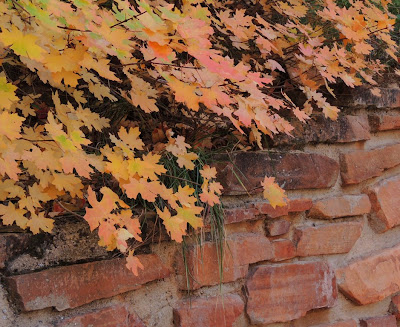 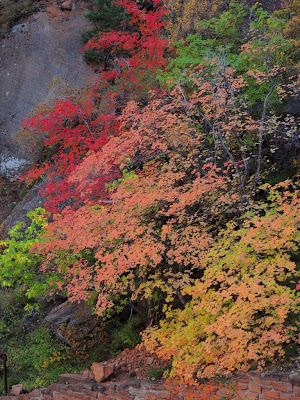 When you're in the mountains it's a good idea to look back on occasion... It helps the country look familiar so you don't get lost on the way back... but you also get a different view of the same scene. Two for one! 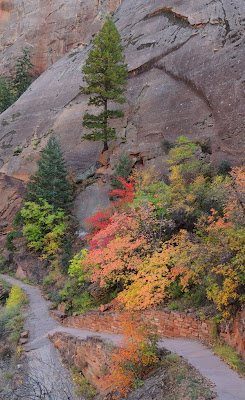 This was another of those difficult days... We had miles and altitude to conquer... but I couldn't make much progress. Take a picture; turn the camera off; take two steps; "Look at that!"... turn the camera back on - take the picture; Rinse, Repeat.

:) It's hard to get anywhere sometimes. 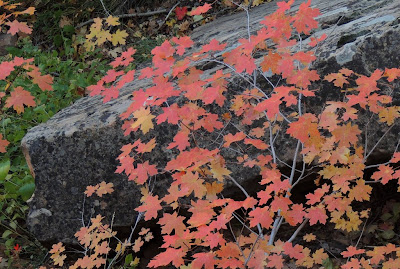 There are difficult times, obstacles and windy trails brewing up ahead. They weigh on my mind. It's places like this that keep me moving. High mountain trails... Canyon paths... desert breezes keep me focused on what's the proper priority.

What comes... comes. There's not a thing I can do to stop it. I'll deal the best I can when the train pulls into the station. Till then I'll live... and THIS livin' is what gives me the strength to endure the times that aren't Shining Times. 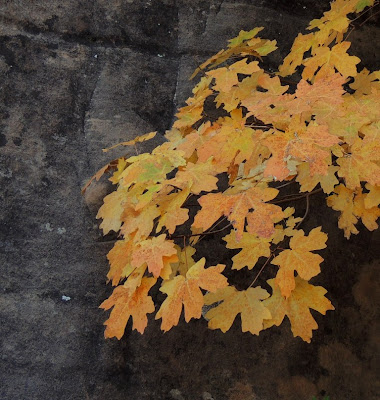 Having pictures of Glorious times and places engraved on your brain and in your heart are the Rocks you can hold on to when the winds are roaring and the streams are raging in your world.

Ask guys that have been in hell on earth situations for a time; What they did, how the handled it to keep on moving... many, most even will tell you they had a place in their minds they could go off to... The joys and peace of Home in their hearts... a picture they could hold up behind their eyes... That was the lifeboat that carried them through.

We'd climbed as far as Heidi was willing to go and stopped to have a late lunch... While we ate, up behind us, soaring over Observation Point were a pair of what we believe are those rare Condors...

Just a black speck in the sky... This awesome Nikon P510 was able to zoom in and capture a decent shot... From just a tiny black line up over the mountain to being able to actually see the bird; pretty amazing, hand held and all.


If you had a hankerin' for such a travel camera they can be had pretty easy... Nikon Coolpix P510 16.1MP Digital Camera with 42x Optical Zoom - (Google Affiliate Ad) Just tell 'em Brian sent you! :)

Well, Heidi told me that was as far as she was goin'... but it was cool sitting in the shade of the canyon so I "shouldn't take too long scouting what was up ahead on the narrowing trail." 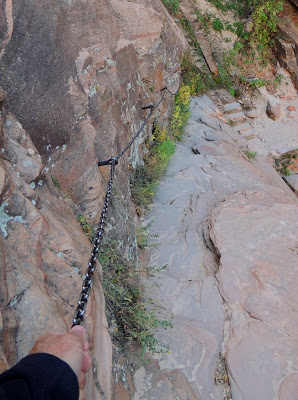 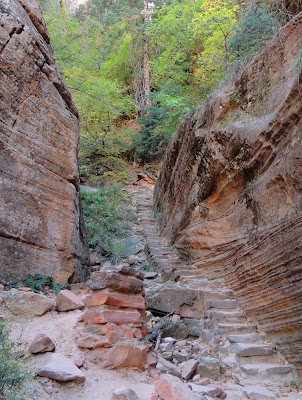 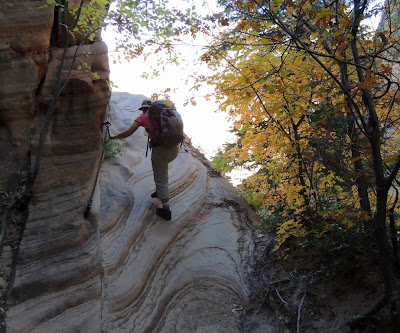 Like on the trail to Angel's Landing... where the way gets narrowest... chains have been hung on the sandstone walls for the faint of heart to clutch on to. 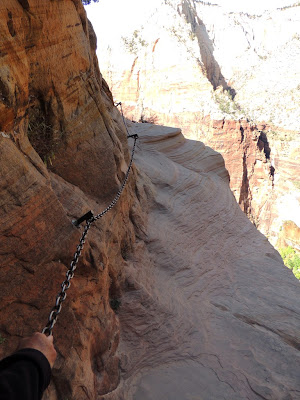 Just don't wander too far off the trail ... Ok? :) The trip is a lil' quick and the landing is pretty rough! 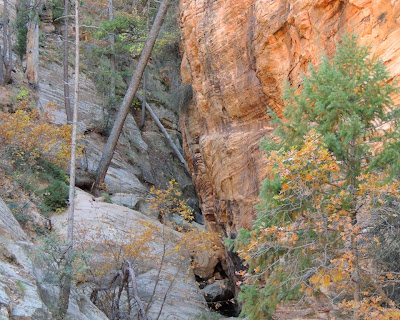 This is where I turned back... The "trail" continues on up that narrow slot between the walls, scrambling over boulders and deadfall... Sometime I'll have to come back and finish the trail.

But for today the Mountain Fix was sufficient for my needs... so I began the return... 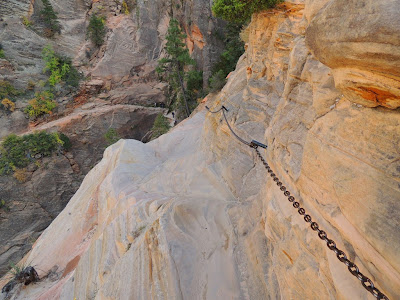 Your heart lifts... your spirits rise, you can't stop it. These mountains have been here forever, and will be here long after we've gone. They've weathered unimaginable storms... our little difficulties pale... It's a place to restore and fill your soul... 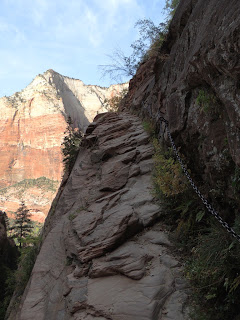 She promised...but that lil' giggle she made at the end kinda gave me pause. :)

I guess she kept her promise... seeing as how I didn't do any high country ricocheting.

Heidi and Betty took a stroll up the Narrows last week... Heidi wants a return show... and she's talked me into it... Mark and Bobbie are nearing our camp this morning...

Tomorrow, the way things stand... a claustrophobic, acrophobic, puss gut army crip that swims like a leaky bowling ball, and walks kinda gimpy... is supposed to go on a hike... wading up a river through a pretty near slot canyon... in October...

Oh Lordy... maybe I did take a fall to many?

Come back and see if I survived...
Brian
Posted by Brian at 9:09 AM

Absolutely gorgeous! I love hiking Zion, and the fall colors really add to the scene. Have fun in the Narrows. Recommend a trekking pole to keep you on your feet.

Looks like a great drinking location. Drinking in the views that is.... no wonder time seems to stand still.

Beautiful! I enjoyed every photo and text today. Thanks. I've not hiked that trail but I have marked it in my to-do book.

We stopped in exactly the same spot--that trail made me decide my companions could do Angel's Landing if they chose but I was NOT doing it!

Gumo; It's as pretty a place as there is!

Jana;Aw, It's all mind over matter, and as little as my mind is, it's easy to lift up over just 'bout anything! :)