Hung around a day to make sure they had their sewer under control...turned out to be pricey... but not as bad as first thought... I like to think me skulkin' around smackin' the ground with my chunk of hickory and cooin'; "Yooooo Hooooo... lillll' IIIIrish! Where ya be hidin' lil' feller? Let's play lil' guy!" ~ kept ol' Murph hidin' back in the bushes. ;)

Yeah I know... but I'm the fella they was watchin' when they discovered the notion that it's a bad thing to go pokin' the badger with a pointy stick that one too many times!

We started for Trinidad... mid morning on a chilly, kinda blustery Denver day... thinking that'd be a good time to slip through town. Turns out ~ There ain't no good time... and ya'll ain't gonna slip through nuthin' if you're gonna roll through Denver. Got caught in stop and go for miles... but then we broke out from under the clouds, I stuck the speed control on "Roadblock" :) and away we rattled.

Somewhere along the way before we got to Colorado Springs we made the decision for sure and for certain that Bandelier National Monument would be our goal... and that we'd cut off the Interstate at Walsenburg and climb over LaVeta pass rather than taking Raton pass into New Mexico.

That took us to Fort Garland where we'd cut south, bound for Questa and Taos with the Monument just a bit beyond ... only it was... 'cause I hurry along so slow, late in the day and too far to go...

Not to worry! Havin' been thrown out of the boy scouts ~ for reasons best left to your imagination ~ I was prepared with an alternate plan! Just east of Questa, New Mexico a few miles is a canyon that runs toward Red River, and in that canyon is a campground called Columbine...

Now... It could have cost us a whole $6 bucks to stay here... if the yahoos that Questa ranger district has given this campground to... were doin' their jobs... buuuuuut... since actually doin' the job is too much to ask of either a well paid federal agency... or a corp. with a sweetheart deal... We is campin' FREE AGAIN! Ha Ha Ha Ha....


Jus' like at Flaming gorge a couple of weeks ago... The lousy corporation running things decided they couldn't make a profit on their contract, so they locked up what ain't theirs to lock up... and went home.

Only... some guys like me believe in a lil' version of Thoreau's "Civil Disobedience" ideas. ;)

If ya'll are gonna lock up what ya got no right to... I'm likely to just go ahead and "camp" there anyway! :)

It is a lil' frustrating that they hang the gates in so far that you don't know the place is locked up till you're in too far to turn around... less of course your as stubborn and as gifted with a steering wheel as some fellers. ;)

I got 'er swung 'round... and we just backed up to the gate and like John Wayne, I pointed at the ground and said; Here! 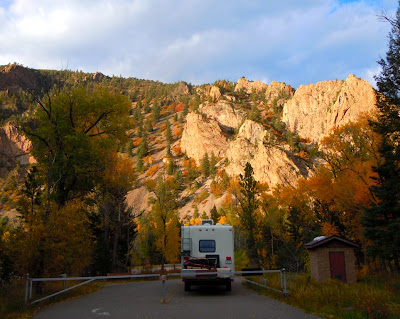 It was on toward sunset so we took advantage of the New Mexico warmth; ain't it amazing what a couple of hundred miles will do for you? ... and took a lil' stroll around our all-by-ourselves home for the night.

... and gettin' these pics ain't as easy as it used to be. I gotta hold the battery box closed with one finger...keepin' enough pressure on the door to keep the battery engaged so the camera don't shut off...

Especially when the onliest one we got left is this hyar lil' Nikon that's purt near as banged up as I am!

The best part is... When I got to Walsenburg I kinda looked west and turned... real sudden like... and disappeared over the rise there awful quick... ha ha ha ha ha... While I was capturin' these pics a hundred miles southwest... that lil' beer swillin' Irishman is hunting all over Trinidad for me clean up on the other side of Raton Pass! 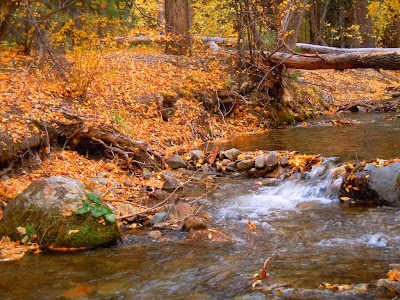 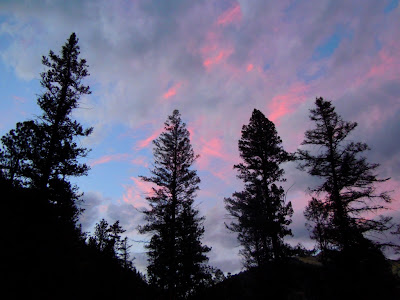 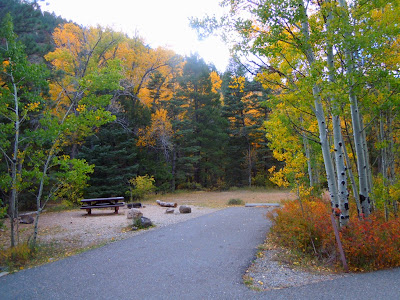 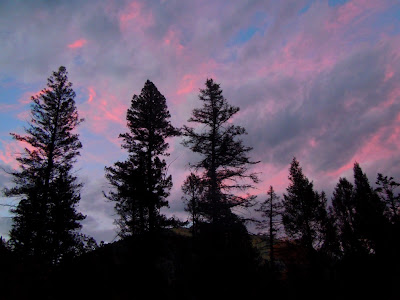 Tomorrow could turn out to be a pretty short roll. If we choose to only go as far as Bandelier National Monument or there-a-bouts. I can't remember ever having stopped in the place... so it's a likely camp for a couple of days.

I'll tell ya what, if this rig was as slender as my scooter, I'd slide her around this gate and pick me out a nice camp right here! This lockin' things up, in front of some of the best weeks to be out and about in the west ~ All fandanglin' year! would make me a droolin' angraphobic, if... it didn't deal me such nice quiet camps all to ourselves! :) and all I got to do is ignore a few lazy burrorats.

Keepin' my powder dry and the rig rollin'
Brian
Posted by Brian at 11:28 PM

Sometimes you just have to take matter in to your own hands!!!) Enjoy since know one else knows how to! BiLL...Great scenery

You taking some great photos with that busted camera. Keep it up.

Had a camera once that the back plastic cover broke off, too. Got duct tape, will travel. It held it on fine. This one you have takes fairly decent pictures til you get another that you like. Like the camp!

Hey! Did you know that Howard and Linda of RV Dreams have decided to do a Boondocking RV Rally? They are roaming around Oregon right now. Thought about you - you ever thought about giving a seminar? Consider giving them a jingle. ;-)

Brian, you are a inspiration to all of us.