It's been a summer of education I guess... One of those deals where you try to adjust to life around you... and you trip.

'cause that's one of the tricks the "system" uses to herd you slowly back in. It's like pushin' cows. There's some of 'em, when they make a break from the herd and run for the rocks and timber; If you run straight at 'em to turn 'em back it just pushes them old sows to run all the harder... and more times than not, she'll run right over the top of you.

The trick is to just kind of run along with 'em for a bit and slowly apply the pressure until they give... and then slowly they'll yield and turn back toward the herd.

This "system" we're afflicted with does the same damn thing. It applies the pressure and ever so slowly you move away from the pressure, and without even thinking about it... you find yourself right back where you started asking; "What the Hell?"

This summer has been that sort of a deal... We thought to change our way a bit and slow down to save money... the end result was the opposite and a move away from OUR way and toward IT'S way...

Yeah... well... :) It (That Beast I despise so much) poked too hard... It came straight at me and then failed to keep me off a 2000 mile circle on the Motorcycle. Now, THAT is gar-uhn-TEED to blow a man's head clear and purify his priorities for a bit...

Foolish move for the Beast to make, considerin' I got a few years of experience of knowin' about herding and such. :)

This comin' winter, I haven't any sort of an idea how it's gonna get done but we're... uh ... I... am planning a pretty good refitting of our way of going. I'm gonna adjust us to our realities but in a way that defends and supports the things we admire... while keepin' the grasping fingers out of our pockets as much as is possible.

It's our (my) plan to set up a 'minimalist', winter base camp in some secluded Arizona spot using the existing fiver as the core of the setup.

Once that's done, or at least well started (and as we're working) I'll be keepin' my eyes open for some sort of an opportunity to acquire, setup, build, create or otherwise conjure up the lighter, more economical... closer to the "In the Wind" nature of my motorcycle of a Travel Rig that we'll run with into the future.

Come spring, we'll either have succeeded in refitting into the smaller, lighter travel rig for the seven months give or take of annual drift-about... ride-about... walk-about or whichever ya'll wanna call it; Or we'll haul the fiver for another season until we can accomplish that task.

The setup is gonna be off grid, as self reliant as is possible... and Freedom Based.

With that in mind I'm thinkin' of an area in Arizona where the annual precipitation is generally sufficient, that with a little thought and sweat, a large if not total % of the water needs can come from rainwater collection and storage.

Once I get this started, of course, I'll be erecting another whole section of the Main Website showing how we went about it... I'm looking forward to it!... and that's how I'm confronting the financial realities we're facing.

I'm droppin' a rope over that bulls horns and draggin' that squealin', snortin', fightin' bovine right directly where I want him to be!

So, in the meantime we're making our last few circles of the season here in Colorado 'fore we pull for the Races in Avondale. We've got our schedules and we'll go to driving for NASCAR again ;) come the 7th or so of November.

Anyhoo, down by Longmont there's a place called Anderson Farms where they've set up a seasonal thing, mostly for the kids...

We met the kids... ours and the grandkids for a mid day thing there a couple of days ago.

I was a little disappointed by the false advertising right as we entered the gate... 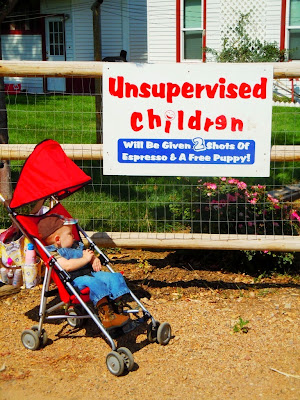 I waited across the way for nigh on to twenty minutes! ... and NOPE... not a drop of Espresso or even the free Pup EVER showed up! It's just not right to promise such things and then not deliver!


Heidi loaded lil' Jillian into one of the pedal carts to start warming up for her driving duties coming up down in Arizona... She's gonna have to toughen up a bit... I don't think two laps is gonna cut it down there! :) 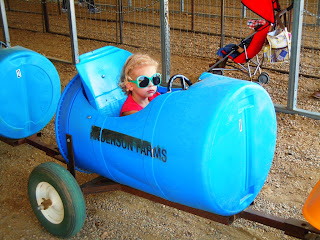 and I sure feel bad for my Daughter... She's got a genuine Prima Donna in Development comin' along. 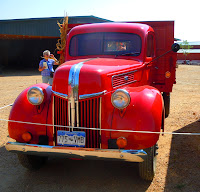 They had this cherried out Ol' Ford set up for taking pictures on the bed...

But... Can't you just see this sweet old rig haulin' a restored airstream?

Or... maybe a custom carved fifth wheel to fit the "Time"?

The kids had other places to be in the afternoon so we took 'em out into the field to pick their Punkins ... 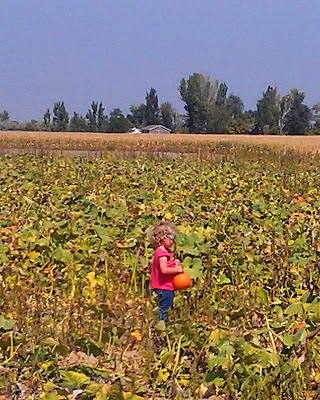 'Fore they rolled south and we turned north...

Yesterday, we took probably our last chance to make a day trip up into the Red Feather Lakes area... We'll be haulin' toward the desert come next Tuesday or so... 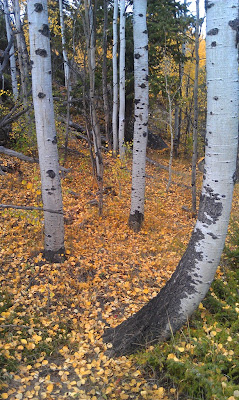 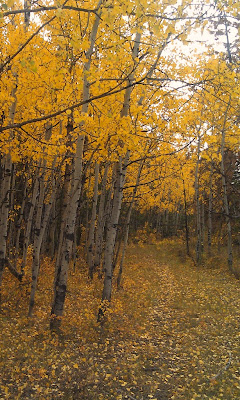 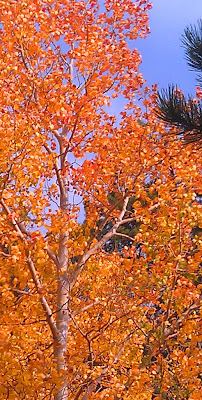 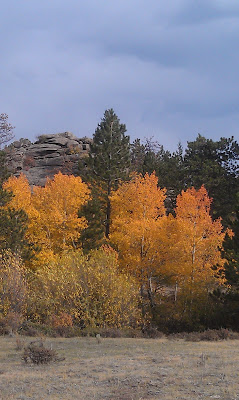 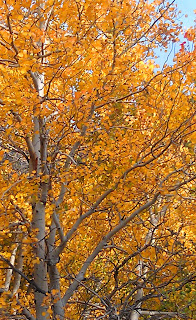 There's work to get done for us to be ready to roll... so I'd better get to it... and we gotta decide... Zion or New Mexico? ;) It's always a tough decision to make; Which way do we roll?

Generally it don't get made until we get to the second or third stop sign and a choice HAS to be made. ;)

Livin' Life and Makin' it Happen
Brian
Posted by Brian at 10:29 AM

Nice post...enjoyed the pictures of the aspens. Looks like fun times with the grandkids, even if you didn't get the puppy.

uhhhhhhh.... I was most interested in that double shot of caffeine! :)

Planned on dumpin' the pup on the Daughter :))

Bet the daughter threatened them with their lives if they showed up with a pup. LOL Loved the pics of the aspens. so pretty and bright. We made it home from California and we had a great time with that GD. Hope to one day be able to take here to the pumpkin patch.

Beautiful autumn pictures! Looking forward to the unfolding of the Freedom Plans.

Sharlotte; Half of 'em were from my phone since the only camera we have left has its own "Faults" and is a "sometimes" sort of thing... ;)

Cindy; I'm lookin' forward to "Unfolding" some plans too!

Hello...
I am new to "blogging"...if this is blogging? I'm impressed by your rv experiences and wealth of knowledge according to your blogs. Which leads me to my inexperienced question. My husband has accepted a new job out of state. They are providing full relocation, though I have not personally seen the coverage of that package as of yet. We are seriously considering living in our rv for at least a year as we scout the area for a home base. What I do not know is...what is the best way, inexpensive way, in moving about one city area? Do we camp at different rv campground nightly? As you can plainly see...we have a lot to learn. Can you help? Cissy

Cissy; Moving camp every night, especially if you're working a regular job would be a royal pain in the kiester aggravation.

If you're in a city, "Boondocking" could/would be a genuine hassle as well.

I would expect that finding one of two options for a long term setup would be the best.

First choice for me would be finding a local private residence (by way of craigslist possibly) where you could rent an RV hookup long term. Probably out in a suburb/rural area on the fringe of the town. Maybe a small farm? and then use your Car for local running and commute. You'd want to find something reasonable distance from the job for sure or savings would disappear in fuel.

The second would be finding a decent RV/Trailer park where you could get a better long term rate.

I don't know what part of the country you're talking about... RV in the north through a winter can get athletic.

Down south, I suppose if you were ambitious enough and there were enough of 'em in the area you could move from Walmart to Walmart daily and have free parking nightly! :) That would get kinda tedious after a bit I would think. ;)