... didn't work :( Now I got this bangin goin' on... Which in a hollow brain pan the size of mine it's kinda like bangin' on an empty dumpster with a baseball bat. You have to remember too... what with my lack of sound softening hair... it's a situation with gawd awful acoustics! 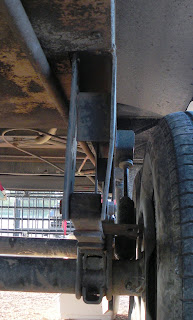 You can see axle mount leg leaning slightly to the left?

And... if you look reeeely close you can see the cracked weld where the left side of the axle mount is separating from the spacer... you can see "daylight" where there just shouldn't be any... 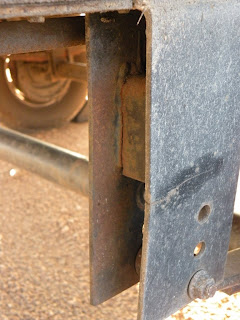 From a little different angle you can see both cracks.

That crack on the front face of the mount runs more than half way through the member. Then the cracked vertical weld on the spacer is pretty clear.

Well... the thing is this. This in one of Six axle mount legs. If One is fatigued... the others ain't far behind.

Also, the front axle has been bent/fatigued/out of alignment for several months. If the rig was younger I might consider just tryin' to get it rebent/aligned. Only, especially with it's age and heavy use... I have Zero confidence in rebending an axle.

That's basically having it bent twice? and expecting it to stay that way? If ya'll believe that'd work for me you ain't been reading around here very long! ;)

Then, it makes no sense at all to me to plate/brace/weld/repair this one single leg and then roll down the road with the thought nagging in the back of my head that one or all of those other fiver are gonna let go... KERWHUMP! and hopin' that don't happen.

'cause I'm knowin' that they are only gonna do it when the only guy around is another useless country boy wanna be welder like that bozo in West Yellowstone last year.

And who in his right mind wants to go down the road with a constant naggin' worry about such things? Some might be equipped for such doin's... but that Some ain't this fella.

A rig ain't an asset. It's an expense. It's shelter from the rain and the wind and lets a fella take a shower once in a while without all the neighbors watchin'. So the bottom line is... what's the easiest, cheapest, least stressful way of fillin' in the current pothole?

I'm attackin' it from two directions. One is pursuing a quote to rebuild the complete axle system. That is currently lookin' at around $2,500 bucks... which is nigh on to $5,000 more than I've got in my possession. :)

The other direction is swappin' rigs... Either way is gonna force the less than choice use of debt. Funny thing about that is, that horse tradin' can be done with a whole lot less dinero up front... which... if you don't have any makes a fella go... hmmmm...

The only other option is bow my head, pack it in... and go back to livin' in the prison I escaped a couple of years ago... That there lil' option is not even on the table. Not even for a lil' while. Such a thing is a slippery slope. I even consider it to be a ploy of the "Beast". Days turn into weeks... into months... and then you look back and that "Little While" turned into a life lived by somebody else's rules.

Bottom line; it's all kinda like what people tell me 'bout politics; "Ya gotta make the lesser of two evils choice." Yeah, well in politics I don't have to. Here I have no option. I must choose... I get to pick which hole I want to step into. :) There's only those three choices here, and none of 'em are the sort that make you sit up and giggle like my Raider does.

It'd be a simple thing if there was a sweet option like that. Truth be known; You stand up, take your best shots and deal with what comes. Life in the West.

The past two years has made it clear to me where I belong, and what I am unwilling to endure a moment longer. The question a guy has to answer is; what price is he willing to pay to sustain and protect his chosen lifestyle? Is his way of living worth his life itself? In the end here I'm talking about money. And money is really only good for maybe one thing... filling in potholes... It has no other value to me.

I don't defend money... I defend LIFE and Freedom (as much of it as you can hang on to).

If what you are doing in and with your life is not worth defending UNTO your life... Maybe ya'll have been making the wrong choices somewhere along the line. There's an old saying I've often quoted. It came from some long ago philosopher. I can't quite recall who; "Sometimes, in doing what is necessary to survive, you render survival worthless." It's an idea that is never far from just about every decision I ever make.

I ain't one for existing. I'm more a pedal to the metal sort of personality. Do what ya gotta do and hang on tight for the ride. Damn caution and Let'er Buck!

The worst that can happen is a spectacular crash and burn... but then... that's just fodder for another story, ain't it! ;)

The next few days will tell the tale. At this early point we don't really know what's possible. Some things seem like they can happen. I did some rollin', scoutin', consultatin' and cogitatin' and investigatin' yesterday... but... until I've watched the movie, I won't know how the story plays out.

Workin' to Fill in the Blanks
Brian

I'd weld it up good... bead over bead over bead... maybe add a reinforcement plate... Then realign the axles and keep on going. You don't want to tackle a complete axle job...
Box Canyon Mark

Well, the way I look at it is ya gotta fix it one way or the other. Ya can't trade it in the condition it is....unless you make the tradee well aware of the danger of kill'n someone down the road a piece.

It's a simple fix and should cost nowheres close to $2500.

Yep, I agree with the first two guys. Fix the little problem now so you have the breathing space to consider the "larger" issues.

Mark; You got me squattin' in the dirt again. ;)

Billy Bob; We were talkin' about tradin' off and let THEM do the repairs... losin' that in the trade kinda thing... buuuuut... :)

So... stopping to catch my breath after finding cracks and warps and Aw CRAP! situations... The rest of the story in the Morning! :)