I read where the drought and heat continues 'cross much of the country. Not so much here around Steamboat.

Camped where we are... I don't know how high for sure... but high enough to fire up the furnace in the morning to cut the edge off the chill! ;)

Every afternoon has become fairly regular routine. The clouds start stackin' up some lil' while just before or after lunch... Generally a small sprinkle in the early afternoon... and then sometimes like yesterday evening...


With another storm brewing we took a shortened hike up the slope to the east. It don't make much sense to be out and about in this high country when Thor is throwin' his darts. Best to seek a mite of shelter 'fore the fun starts.

But... the urge to hunt for ever more flowers and pics must be satisfied! and the need to just get out; movin' and breathin'.

There is a sensation; hard to describe, that I get when I climb up a steep slope high in the mountains, to stop at the top with my chest heaving, heart pounding and lungs filling with Pure Mountain Air.

It's a feeling of calmness and serenity. A feeling that somehow helps arrange the "Stuff" that litters life, into some sort of proper perspective. 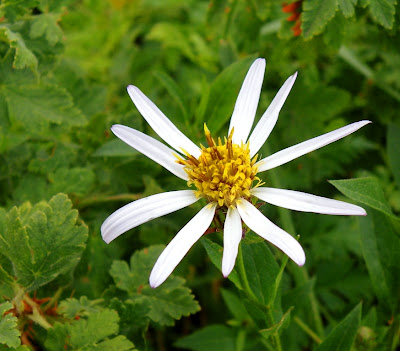 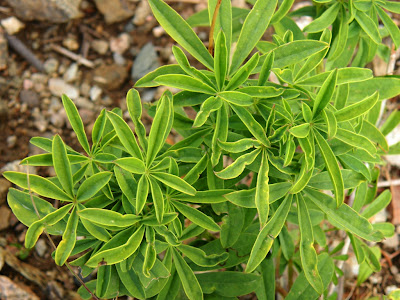 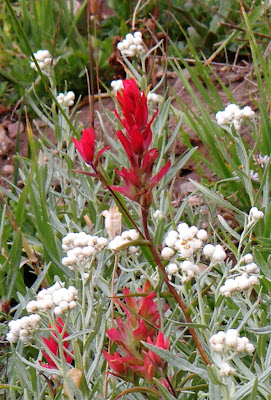 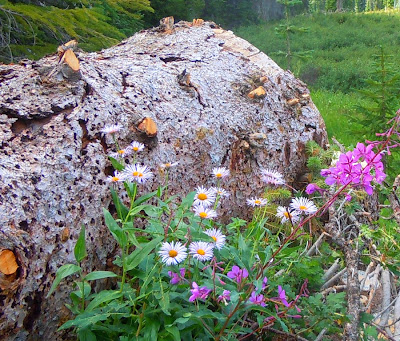 I get much the same... and more... from my Motorcycle. Lose either and I am in Deep Deep Kim Chee..

We hustled back to the shelter of the rig with the storm comin' slow... but when it got here Boom! Crack! The lightning flashed and the thunder boomed... except for the bolt that struck maybe a hundred yards or a touch more out in front of the rig... that one fairly CRACKED!

We both jumped off our seats with that one.

There's nothing like a storm in the mountains. Just plain awesome.

Once it passes ever'thing is fresh and clean. The air is crisp and pure... and there's something about the light that changes...

The sight of the road, faintly glistening as it disappears into the timber in the fading light... it tickles the wanderlust of a gypsy...

But then, the sun broke out under the rim of the clouds to the west as it came close to sunset... and the light changed yet again... 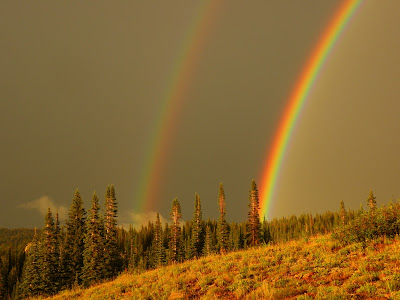 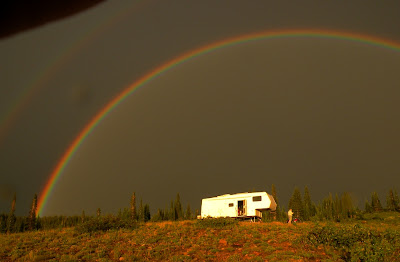 It's breathing such purified air in the light of glorious Far Country that drives me. Some might get bored with it I suppose. Maybe my intellect is small enough to be ever entertained and satisfied by such visions. Whatever... I can NEVER get enough. I have to constantly come back for another fix.

It's like a deep diver coming up after so long under water and taking that first, deep, gasping breath... It feels soooooooo good! :) and why I am always seeking ever more boondock camps.

OMG Brian what a breathtaking photo of the rig under the rainbow. Love it. I can see why you love it so much out in the high country.

You put into words what is so hard to explain! Looks like you found a beautiful spot, I'd find it hard to get bored there, too.

Purty, indeed! I love the way you 'turn a phrase' in the last two blog entries. You make me chuckle! Nice scenery you get to enjoy and that rainbow!!! You are getting WAY good with learning your camera and eye for a good pitcher....!

Love your blog. guess you are in steamboat, we are in manitou, got a gully washer here tonight. some people had to move for fear of flooding. guess i need to check out the b. of land management. beautiful pics. I loved your blog about ungrateful, i feel the same way. we've lived in our motorhome for six years and love it. it's like a old worn out shoe, so comfortable and we don't have to worry about drivin through the wood and gettin all scratced up. Don't think I would trade it for anything. It has everything we need. Take Care