Now... I'm supposed to be workin' in this Long Camp we've set... Yeah, well... The past two days we've been backroading the Ol' flatbed. :) Not much work gettin' done! I got the part time part of the Work Part Time... Live Full time Philosophy shined up real good! I vow!

And as for the RV Camp prospecting... this country is pure gold!

Started down in Mancos yesterday with a lil' snoopin' in their art galleries and checkin' out the town. I like the place. Mancos is a nice lil' burg. Started as mostly a lumber town, supplying the mines up Silverton way back in the 1880's.


That and raisin' beef to feed 'em.

As always... the folks feeding and supplyin' the miners probably made more than the miners ever rooted out of the hills! :)

Today... the only "lumber" cuttin' goin' on is to supply an excelsior plant that builds aspen swamp cooler pads and those long, snaky, 6" diameter or so... burlap and stuffing, erosion control gizmos you see staked to the ground where they've done road work and such.

Poked a short way up one forest road on the way back to camp... but it was late so we thought we'd go back in the morning with 'nuff time to make a full circle.

Decided to just go ahead and use the photo of this old barn from Heidi's phone... Too bad the dang things don't make phone calls as good as they make pictures! ;)

So we pulled back in there today, intending to make a circle 'round the mountain...


At something over 9000 feet it's still a lil' cool. The Aspen has just started leafin' out. You all that grey is dormant Aspen... This place must be dang near blinding come the fall when it all turns back to gold.

The road was dry and we climbed higher and higher. Even put the ol' truck into four by... cuz it's easier over the washboard...

When we got about as high as I thought the road would climb we started running into winter dropped Aspen that had fell 'cross the road. Somebody'd already come along and chainsawed the logs back to make a big 'nuff hole to roll through it that turned out to be futile... 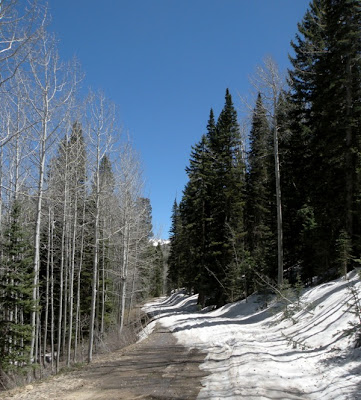 ... Unless you got more ambition than I did! I walked up and took a look... That snow was wet, heavy and more'n a foot deep. Likely the same somebody that'd fired up their chainsaw, tried to push his lil' jeep on through. The tracks were clear where they got 'bout halfway across that first big patch... and got stuck... 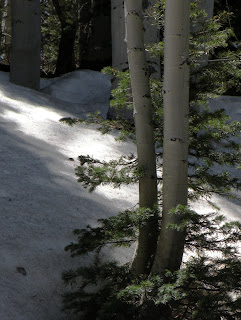 Trying to back out, they darn near slid off the bank into the trees on the left... They engaged a significant amount of pucker factor to get the rig back out without goin' over! ;)

I admired their ambition for a bit... and the purty surroundings for a bit more...

And then... Not wanting to gain the bruises and scars I'd get if I put the truck, with Heidi in it... Over the edge in that same place, I opted to exercise what lil' discretion I keep around and wiggled that truck around and went on back a ways to take a peek up another road.

I got to tell you... this country round about Mancos is some Pristine Boondocking Real Estate! 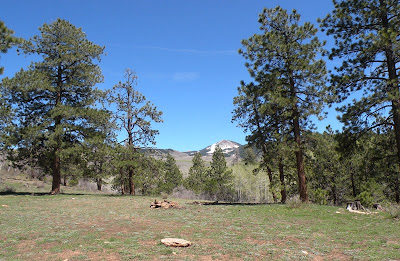 Whud-a-ya think? Could you stand to set a camp in this spot? I know... it's pretty awful what with all the empty space an' all... but you could likely get used to the quiet... and having to use an alarm clock to get up in the morning rather than your neighbors hot water heater! :)


... and to be forced to endure a view such as this, every time you stepped out of the rig in this RV Boondocking spot... a 1/4 mile below that last one, why... it'd be the cruelest sort of torture for a fella wouldn't it?

Compound that with such sites bein' free... and why... Somebody should pass a law! :)

Now... over on the road we're currently camped on, several camps moved in for the weekend. This here road... a couple miles west... not a single camp! If I'd realized this was here... Here is where I'd be camped!
Another prime place goes in the "notebook"!

Just be aware if you Boondock around such country as this in April or May... THIS country don't call it summer until after Memorial day! You'd best be prepared to ride out a few days of snow! It can blow in fast and keep you from movin'. If your propane, water and groceries are good... and your Kindle has a few of my books on it! ;) you're set to weather the storm!

Sunday is for a ride up the Million Dollar Highway, clean to Ouray.

Then it's back here... and somebody has to get some discipline... and whether he likes it or not... he's got to quit playin' 'round and get some work done!

Beautiful country and pictures, Brian. I consider that, not only are you enjoying the down time (and if you think about it for a second) you ARE working, too. Compiling new info for yourself (camps, photos, thoughts for a book?) not to mention, the spreading of info for others to reap what you are enjoying. The processing of that, inside your head, and transfering it to your blog might not seem like it, but I see the possibilities fementing...Have a great day!