Yeah... yesterday evening, sippin' Land Shark and grilling up our pork chops for supper the desert looked like this... 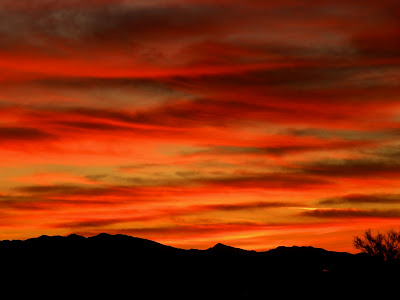 Well, unless you turned 'bout 90 degrees a few minutes earlier and this is the view...

Tonight... besides sittin' in the fiver bein' more like a ride on a poorly maintained roller coaster, it's a lot like having your head inside a brown grocery bag... with a fist full of the dust out of your vacuum cleaner thrown in there. Wrap a bungee cord round your neck... Now... shake your head real hard... Uh huh, that's here... only not quite as bright! ;)

Drivin' back from laundry day in Parker, I was kinda wonderin' if my clothes would actually be cleaner when I got back to the rig, than they were when I headed in to wash 'em.

Ah... all in the desert is not always Fine and soft! ;) Sometimes... the desert likes to move around a bit... and when the wind gets to blowin' 30 miles an hour or so, like it was a bit earlier, the desert moves around a lot.

Had to laugh yesterday evening a short while 'fore the pork chops got sizzled. We were down by the Tyson Wells area, walkin' back to the truck after taking care of a lil' shopping therapy ;)

There was a guy... in a two wheel drive dually... poor boy just don't know how to handle desert sand. ;) Watching his back end bury itself in that flour was a sad thing... But... when he climbed out... saw his tires dug in half way to the axle, and then climbed back in to hit the throttle and finish the job... I couldn't help my self... I started snickerin'.

But really... am I the only one who Remembers that old saying? "If you find yourself in a hole... the first thing to do is STOP DIGGING! "

I hadn't a tow strap but offered to pull him out if he had something... His reply, which was expected since his truck was NOT the same brand as mine ;)  ... You can't be seen letting the "Other" make pull you out of trouble you know, It's Un-manly!

Testosterone driven stupidity is sometimes... Just freaking hilarious! :) ... anyway, his reply was, Of Course!; "No, I got a friend coming."

Yup... I knew it and you guessed it... the Friend had another Two Wheel drive dually of the Same Make! :) and apparently had attended the same driving school... ha ha ha ha ha!

When dually #2 pulled off the hard pack into the soft sand to get lined up to pull him out... and started sinking his tires... as Dually driver #1 came walking up to him with a rope of a size I'd not have any real confidence would hold an anemic Dachshund... I just knew I had to put the ol' Dodge in gear and get out of there...before I choked.

Ah... that woulda been a picture for you though... two mired... uh ... Duallys... buried to the hubs... with this tiny lil' string busted between 'em, and them two Ol' Boys standin' there scratchin' their noggins; "Geeze, it shoulda worked don't you think? This is a Diesel! I gave it plenty of throttle and that's at least 300 lb test rope! and all terrain tires too!"

Oh yeah, and The salesman PROMISED that truck would pull ANYTHING!  Stop it, STOP IT you're killin' me! :)

Oh lord... and then we all wonder why the politicians we put in office rip us just as bad as every one that's come before... Every time they yodel out the same tired lies... we eat it up like it's a fresh recipe... Obama, Gingrich, it's all the same brothel folks... just practice safe sex... 'cause whichever one you choose... ya'll is still gettin' screwed.

Moral of both them lil' tales is; If it ain't workin' folks... stop doin' it! ;)  and try something else... while you still got something to try with?

So... tomorrow morning (Sun.) we're meetin' some family and friends of theirs, to go investigate a ghost town somewhere south of here... well... a ghost town that I'm told has been renovated a bit somehow for tourists... hmmmm... back east they call that Urban Renewal don't they? :)

Chokin' on Dusty Laughter in the Desert
Brian

Brian-- you need to follow Marks example of video of such stuff! we need the laughs-- I delivered mail in Wisc snowstorms for 20 years- what fun watching Texas and Oklahoma drivers driving in 1 inch of snow=== that is right -slam on those brakes and twist that steering wheel!!LOL

That is a real piss of too ya know...When you have those hefty truck payments and still learning to drive your 2 wheel drive in a four wheel drive environment. I had to pull a 2 wheel drive dually out of his spot pulling his trailer on wet grass! I wish i had a picture of the fellows face because everyday for 3 weeks he told me my truck wasn't big enough to pull our trailer!!! I had tears that day! ;) BiLL

I laughed out loud all through your post (actually, I could "hear" you laughing which go me going). I have a 3/4 4 Wheel Dodge, too, but not a dually.

It reminded me of a woman on TV years ago. I was getting ready for work, watching the news because we were in the middle of an ice storm. They showed a woman who was stuck on the ice with her front end pointed directly at a poor guy in another car/truck (T-bone)--he was like a deer in headlights. Here goes the woman spinning her back wheels as fast as she could and all I could think was, "That poor guy when she burns through the ice (wasn't very thick, yet). Sure enough, those wheels whistled like a siren, and then caught the ground underneath her which catapulted her right into the poor guy who was helpless to move. My husban and I about died laughing. Fortunately, he was wise enough to get to the passenger side of his vehicle, so he wasn't hurt.

I come from the north and know how to drive in the winter weather, but when I saw this fool from the south--well, I just stopped dressing and called into work--I wasn't about to drive with her on the road. I have laughed many times thinking about the look on that poor guy's face.

Thanks for the laugh, Brian.

Some people have way more pride than brains. And the Quartzsite desert provides better entertainment than TV. But I just can't tolerate when that dust blows so bad.

My first post I've read, but I love it and will go back into the archives. Loved the brothel comment!

Being from Montana (and NY in a previous life), my wife and I had no idea what issues could arise driving out on the sand. When we reached Parker, AZ a month or so ago, we set up somewhere along Shea Road and found out it gets a bit noisy there on the weekend. Seeking some peace and quiet, we ventured a bit too far out into the soft stuff and found ourselves sinking quickly. This was in our Scotty '93 Dodge 350 dually (diesel) class C motorhome. If it weren't for a kindly fellow who watched us get into this predicament, I would've had to call for a tow. He had (I think) an older Ford pickup which he had converted into a neat gypsy wagon which pulled us out on quite a long rope. I couldn't imagine refusing help based on the make of someone's truck but I suppose some people get wrapped up in stuff like that.

I laughed out loud at your dusty analogy. Here in El Paso, Texas, I relate! I write 1,000 Miles on My Own Two Feet, http://1000milesonmyowntwofeet.blogspot.com/ and we'll be RVing the US soon. Looking forward to following your travels and some more laughs. Thank you for sharing, and happy trails!