Ha! Did you realize that some of your favorite lil' RV electronic gadgets were actually 12volt to begin with?

Well take a close look at the transformer you're pluggin' in... that pup is likely converting your inverted 110 volt back to 12 Volt! ... and who knows... that's cornfuzzling enough I might could have the converting/inverting back'ards... but you get the idea.

I've been wanting to wire my favorite couple of electronic gadgets in hard for some lil' while... just... electrical stuff always intimidates me. I figure some of that stuff is pretty sensitive to gettin' wired backwards so I've put it off.

Well, this afternoon I finally up and decided to hang my fears in the closet and go at this lil' project. We've got an electronic picture frame and an Ipod dock stereo. Look at the transformer for what you want... 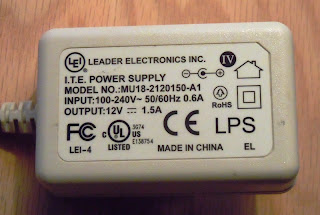 This is the transformer for the Electronic Picture frame... the output is 12V... Sweet!

If you look at the wiring diagram on it you can see that the outside of the male plug that actually plugs into our Kodak Picture Frame is the negative side...

... so all I had to do was check that polarity with my handy dandy digital multi-meter and Wa La! Hard wired picture frame...

Which is sweet 'cause now All we gotta do is add any new pictures we want to see often to the SD card that sticks right into the top and Pop! We've got a rolling slide show of our Pictures. That's just about the best Photo Album I can think of... Unless of course it's one of my Hand Tooled Leather Albums ;)


That Ipod stereo sitting behind the lamp was the exact same deal... Now, they're powered straight from the 12V batteries and no inverter to use up more power... Sweet! 1500+ songs and all on solar power with no inverter loss... Yes Sir!

One other thing... That good lookin' stone lamp? Came into the world burning 110 Volts... Know what it takes to convert those to 12 volt? a light Bulb! Ha!

Just go on down to Home Depot or just about any hardware store. They carry bulbs that look just like a 110 Bulb... but they're 12 volt. then all you have to do is wire into your 12 volt system where ever you've got access. Take your favorite lamp into the rig and not need to have an inverter running to use it!

Gettin' Wired in the Desert
Brian

I hate all of those clunky transformers on the end of all of the cords. What happened to wireless! I still have a ton of cords attached to everything. Maybe you could fix up my rig someday, I need a handyman.

Yep, those transformers are called phantom loads. A transformer at peak efficiency will still lose as much power as it passes. You done good.

Hey Shadwmoss! You might know that...you ever hear of a simple lil' voltage regulator to keep 12V from goin' much over 12V ?

Very cool idea. I'm with you though, I'm kind of intimidated by fooling with stuff like that.

I suspect that the fella that gave you this bit of wisdom didn't have a regulator on his solar system, or his regulator allowed a higher voltage. I believe we set up your system to prevent such over-voltage conditions.

Hey Mike,
What I was talking about really doesn't have to do with the solar system itself. Mine tops out at 14.3 which is fine for 12v batteries.. But.. If you look at the small inverters for the electronic gear most will or use to have a range like 12.1-13.0 volts ect. and it's a guessing game on which ones can stand going over the hi end of that.

Brian: It's called a 12V diode and a dropping resister, about $1 worth of parts and a soldering iron. I'll see if I can surf you up a drawing. Diodes pass current one direction only, and a (Zenner?? Hell it's benn 25 years since I built one...) diode will hold the voltage at a certain level. Course, they probably have the prebuilt into a single chip that cooks breakfast for you as well now.

Deleted my last recommendation because I decided it was too complicated. Shorter answer is that your issue is most likely a common one, and you can either build a quick regulator out of a regulator chip and a resistor, or more probably the solar folks have something already packaged up that does what you need.

Note to self: don't try to get technical on only 1 cup of coffee...

yeah..what shadowmoss said..lol
now im on a pc and not pecking on a phone screen I'll tell you why to beware..
12 volt automotive appliances have a "range" of current they can withstand because of surge power within the same system from other do-dads pulling from the same system where as consumer electronics are made to have maybe some range but in most cases not much.If it says 12.1 @ 1.5 amps output on the converter I wouldn't question it.
...Bo

Most devices want +/- 5% or maybe +/- 10%. Some are less picky than others, light bulbs will burn brighter and burn out (much) quicker on higher voltage. (Stop lights used to use 130v bulbs at 120v -- dimmer, less efficient, and lasted much longer.) It's actually pretty hard to regulate 11-15v to 12v efficently, it's much easier to go to either a higher or lower voltage. I plan on writing an article on my blog about it.

Never thought this lil' idea would stir up so much... wish to hell I knew what they were talkin' 'bout! :) Diodes and resistors and amps and %'s and ... aw hell... maybe I should just put the dang Ipod in my pocket! ;)

Most electronics tell somewhere on them, usually the back, and with a magnifying glass I can read the max volts, or millivolts and max amps or milliamps they want.