So... Does "Smelling the Roses" Include... Tractors and Boats?

Sitting here in the Cap Sante Boat Haven Marina Dry Camp lot... They had a small antique equipment show yesterday. A little bit of everything, from tiny lil' model motors, to Old cars, tractors, and one genuine old locomotive, originally built to run on compressed air underground, that they hauled in on a trailer.


The precision of the lil' model motors was pretty amazing... especially considering most all of the smallest lil' fittings, had to be fabricated by the builder... including some tiny little spark plugs! :) and the finish on the ol' tractors... some of 'em looked better than they would have, comin' off the assembly line! :)

There was even an old motorcycle or three... like this Ol' 1948 Harley.


Then, of course, across the Marina, in the water... are the boats that catch Heidi's eye... That tug boat style seems to be what she likes... well... that and the 100 foot or so Yacht over on the other side :)

A couple of rigs that caught my eye, back in the equipment show was an old '49 Diamond T... 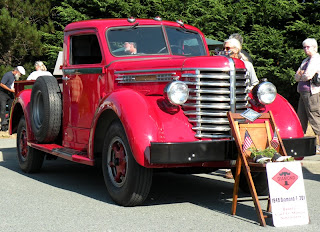 Can't you just see this Ol' Beauty pullin' into the campground in Yellowstone... draggin' a Tear Drop Trailer behind it? :)

Yeah... I think it would be cool... right up until I think about all the work to get one roadworthy... and then...

... where is a guy gonna find an alternator for a 1924 whizzbanger? :) or any other part when ya bust something... hmmm... I may just stay with rigs under twenty years old :) 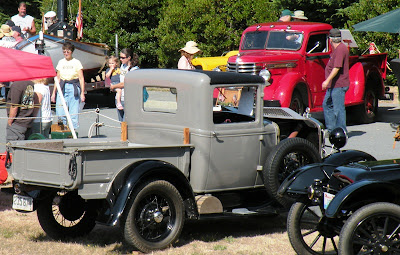 
We finished out the day yesterday, sharing a meal on a fine day, with fine friends. The crews of the Box Canyon Blog... and goin' RV Boondocking combined! :)


So... I bet you were wondering... how could I make a post today... without saying Something... about this particular day...

I'm not forgetting... I'm just... doing it different than a lot of other people, I guess.

So much has been lost... in terrified reaction to the events of that fateful September 11th.

The intention of our enemies, was to disrupt, and destroy our way of living. To a great extent, due to the actions of a few, they have won a great victory against us... that saddens me, and weighs heavy on my heart.

Many in this country have cried for ever more sacrifice of Liberty, ever more invasions of our privacy... in the terrified hope they could gain some security from that sacrifice. (A Futile fantasy.)

I for one... call for More Liberty. A Return to the RIGHT to Privacy. It is in our Liberty that we'll find our strength and security.

I call for us to Honor those, who have sacrificed themselves in our defense, on far away fields of Honor. To Honor them, by Living Our Lives, with the Courage they demonstrated.

We should be thumbing our noses at the filth that would attack innocents. We should be Refusing to yield our way of Living.

We should be Living Our Lives in the Liberty and Freedom won for us by our Soldiers, Sailors, Airmen, and Women... Living our Lives with Courage... to Honor those who have Given their Lives, and their Hearts, to give us the Freedom and Liberty we are Blessed with.

So... today... I Breathe Free in this Marina, on the Shores of the Pacific... and choke down the fear that pathetic fanatics try to beat me with.

I won't fear their sick philosophy. I only fear the Loss of Liberty... and that in allowing that, I would Dishonor the Men and Women who gave their all... For Me.

That, is how I will Honor this day.

Living in Freedom
Brian
Posted by Brian at 10:30 AM

Great looking "stuff", and I don't think anyone could have summed up my feelings about 9-11, and how it has affected our lives, better than you did. It's a shame we have lost so many liberties in the "Name of Liberty".