Do You Still Have Weekends When You're RV Full Timing?

So yesterday was Saturday, right? End of the week... or Somewhere near to it... but does "Weekend" even mean anything... When you've changed ever'thing up and gone Full Time RV Boondocking?

I mean... it's pretty much a situation where, pushed way deep down, in the back of your mind is this tiny lil' dread that it Will End. That all good things must come to and end... and there's a tiny lil' part of you that sits waiting for the other shoe to drop... a tiny lil' part I keep well battered and beat down... Shut Your Pie Hole Murphy! :o)

How-some-ever... some endings aren't too awful hard to take...

Yesterday Morning Heidi and the dogs went for a long hike... something better than 6 miles on the GPS program on her Droid Smart Phone... While I tried to be a good button puncher and get some work done. Figures it would be when I didn't go along...

Along the way they saw a pair of Desert Bighorns on the back side of the mountain to our south... 'course the thing she forgot to drop in her pack, was a camera.

So, in the late afternoon, we strolled up to see if maybe they were still in the neighborhood... If they're still there, they kept themselves well hidden... 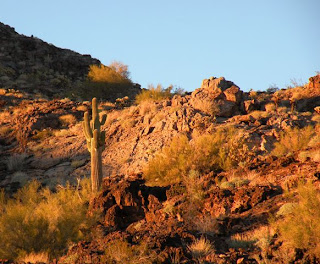 We went where she'd seen 'em in the morning... hoping, with little confidence, they'd still be there, and maybe just getting up for supper...

... but nope... No Bighorns... I suppose, dry as this country is, they have to keep moving pretty steady to not overgraze their territory.

I don't know where they water around here, though I guess they only need to get to water every three days or so... maybe longer...

We'll try again... the Sheep are of the sort that moves around pretty much all the time... sleep a while... graze a while... then take another nap... Hmmm... kinda like a lot of RVers I've seen! :o)

Turned back toward camp, without finding the Bighorns, as we were losing daylight... and I really didn't want to try to find my way across the Desert in the dark... Trailblazer that I am! :o)

Nice quiet evening for a stroll... 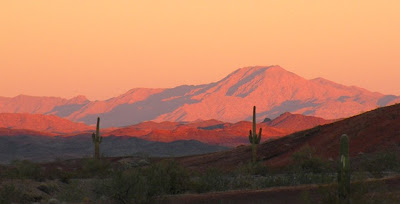 ... Then, getting back to camp just before dark, and sitting in camp under the awning... sippin' an ice cold LandShark... the ending of a day in the Desert isn't something to complain about...

The ending of our time here near Quartzsite is coming near though. We're not really wanting to leave... but... even RV Boondocking, there are commitments you sometimes have to make...

... and our Commitment has been pushed up a couple of days too.

Got a call from the NASCAR people... some hours have been added to my schedule, Heidi has to work Monday morning the 21st... and I have a few hours of training on Saturday the 19th... so we have to leave this boondock camp on this coming Friday... to move to PIR in preparation for our week of employment...

So... though we'd like to stay here near Bouse for a while longer... the quiet and calm here on the Desert is food for a mans soul... the food for a mans diesel tank takes greenbacks... and our upcoming week at PIR is gonna produce enough of those to supply our diesel tank with enough food for something like 20% of this summers ALASKA II Journey! So... we go! :o)

I'm curious... if you've kept a camp for nigh on to a month, and we came to this Desert Country around Quartzsite and Bouse back on the 19th of January, is that long enough to qualify as another Leaving?

We're looking forward to what's coming up, both PIR and Alaska II... but we're kind of melancholy 'bout leaving this camp... It's been quiet and good... rewarded by the pace that has us finding the beauty in soft Desert Sunsets, the gravel under our feet... like the Turquoise in yesterdays post, and knowing, at least for now... the chains to the treadmill are cut... (You'll hear me squealin' like a pig, should they try to clamp 'em back on!)

Coming Close to Another Leaving...
Brian

Return to the main site of goin' RV Boondocking or Visit my Sister website Motorcycle Touring on Freedom Road
Posted by Brian at 9:41 AM

Your photos today are great but the sunset one of the mountains and saguaro is exceptional! Beautiful!

Thank You gumo! I tend to have more trouble photographing the Desert... It's one of those places where you usually have to focus on a smaller part of it... that view there, is actually a view looking east from just south of our camp... The first mountains I see each sunrise... the setting sun sure lights 'em up nice to don't it?

I'll miss that long view when we pull out of here...

Isn't it nice to just Be in a place for a while, then move on to a new adventure, and still know you can always return. Have fun making those AK $$$$.