Not a particularly spectacular sunrise this morning. But, what can I say, a man can only take so much spectacular... so... when the poorest of 'em seem so quiet, calm, soft feelin' and leave a man fairly content... what's there to complain about? He could be living on the third floor of a tenement building with 19 squallin' kids above and below him! :) 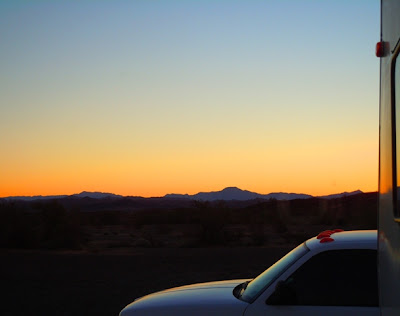 But then, you know me... there's always somethin' a fella can pull up to grouse about. :)

Had to leave camp for most of the day yesterday, to go pick up Heidi. Got back home to camp, just before dark... to find that the neighborhood is goin' to hell! Geeze! Some fella had the Brass Plated audacity to run his Bus Conversion into a spot less than a quarter of a mile away...

Just on the other side of the little rocky hill, just outside my window... 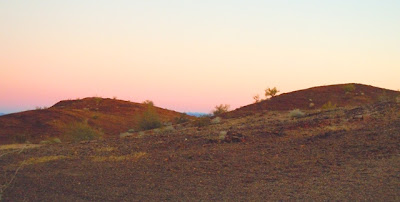 That's OK... I can look the other three directions and know there ain't nobody off there, for miles... Yep, tell you what kids, there's still room to roam in the American West.

Had to wait till 'bout noon to pick up herself... she had to talk to the same guy I did a week or so ago... so now, after filling out her paperwork, come the week of the 20th we'll both be workin' NASCAR for wages. Me haulin' NASCAR Fans around... and herself hawking tickets at the gate... and both paychecks have already been spent... earmarked, in our emaciated full timers budget, for diesel fuel along the Alaskan Highway this comin' summer on our Alaskan II Journey...

Which brings my convoluted cogitations back to a small thing... Remember the other day I was sermonizin' 'bout finding the Joy in Life... and just 'fore that I talked 'bout finding a job here and there along the way... and pretty much in both those cowboy monologues I said something about "Keeping tuned in"... 'bout somehow keepin' your brain clear, so you'd even Notice the opportunities as they came along, hidden amongst all the Noise and Bovine Biological By-product the world throws at you?

Have you ever wondered just how to do that? Me too.

I used to read where some guys, with all sorts of letters after their name, would write an article or a book... and they'd tell you the same damn thing... Don't worry, Be happy!... But most of 'em would never tell you the How of it, would they?

What use is their big talk about what trail to follow... if they don't at least give you a hint or two 'bout where to find the trail head? It's an easy thing to say... a tough thing to do... Since folks were lookin' at what they were writing... seems like they may have been havin' some difficulty finding the start of that trail... don't you think?

Now I'm not 'bout to tell anyone I've got some magic pill. any which way you look at it... a whole lot of gettin' where you want to go, takes hard work and discipline.... but there are simple little things you can do... that give you a leg up on things... and maybe the biggest... is to find all the ways you can, to engage that lil' voice in the back of your head...

The one that I have so many conversations with? The conversations that scare all the folks sittin' around me at Denny's? :) When they see an Ol' guy sittin' there... sippin' his coffee, and havin' a four-way conversation... With Nobody?!!!

Most people are gonna call that your sub-conscious self but...

Anyhoo... one simple lil' way to help keep things in focus, and keep that internal conversation on track... and keep it from bein' Dy-vurted by all the noise and commotion 'round about... Is a thing I learned back when I was Rodeoin'. It's a trick to visualize, where you want to get. A trick to keep that subconscious part of your brain... focused on the goal.

The trick? it's a simple thing. Just post a few lil' messages... to yourself... where you see 'em as you go about your day... A word, a phrase... or a picture that Means Something To You...

Put it on the mirror in the bathroom so you see it when you shave in the morning... uh ... or put on your makeup... a post-it on the dash of your truck? 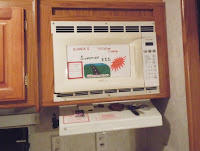 ... or... like me... a lil' Billboard of stuff that I've pasted on the door of the microwave in the kitchen.

I get a soda out of the fridge...walk past headed for the throne... or just sittin' on the couch chillin' and listening to Bob Seger on my Ipod... when I glance up... there are those lil' pokes at my brain... keepin' my goals and things I want to sort out... stirred up in the mix... not letting all the distractions cause me to forget what I'm really after...

The idea is that as the world tries to confuse you, and knock you off your chosen path... having a lil' reminder here and there gives your brain something to latch on to. Works especially good if you've got a place you want to go... and just can't figure out, through all the tangle that life is... how to get there... This lil' trick just simmers along in the quiet places in the back of your head... until the answer jumps up and whacks you!

Not a big thing... but it can produce pretty amazing results... the Power of your Heart focused through the mechanical tangle of your subconscious mind... producing the Realization of your Dreams... HooYa!

:o) bet you didn't never expected that kind of Psycho Babble out of a Fella with a goatee, a motorcycle and cow flop on his boots... Did Ya? :o)

Return to the main site of goin' RV Boondocking or Visit my Sister website Motorcycle Touring on Freedom Road
Posted by Brian at 8:49 AM

Hey, that sounds smart. Rodeo Wisdom - I'll take some for the road.

Are you related to Daniel Boone? They say he got upset and moved to Missouri because someone moved with in ten miles of him in Kentucky.

I can never understand why some RVers feel the need to park within sight, or right next to, of another RV. When I tell people about free dispersed they usually freak. What no people!

Creating an image of desires usually works for me. And notes are great reminders.

do you put one can back in ,when you take one out ,,or do you leave that for the missus..just wonderin ,, hehe i get told all the time ,she is so persistent i just do it now ..ok ttyl and keep up the gr8 blog ..

great blog, please visit my blog and be a follower I look forward to seeing you there www.momzblotter.blogspot.com