Heidi and I took a ride Friday, up over Trail Ridge in Rocky Mtn. National Park... First Time She has been up there on a bike... 'course, this time, she was sittin' in back on the Raider... 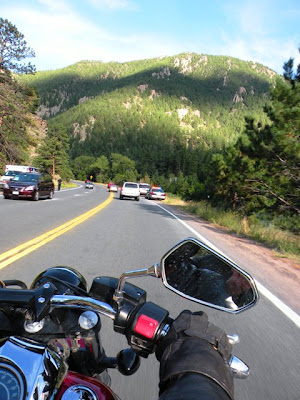 I was a lil' surprised it didn't freak her out any... guess she's gained some confidence in my ability to keep us from bein' hood ornaments on somebody's Buick! :o)

She was a lot happier though... with a view like this from the back seat... 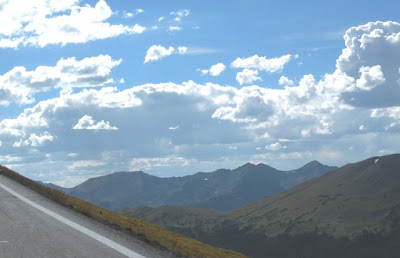 She's still learning how to work the camera on the fly... 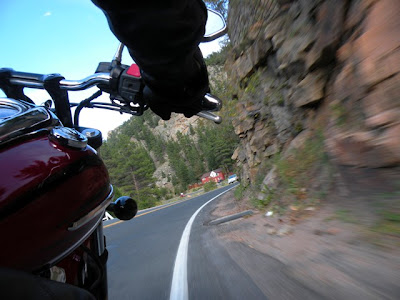 One thing 'bout this ride... we've been talkin' 'bout Slick for a while. Heidi really has come to enjoy riding behind me... and, the Ride My Own has not been advancing very quickly for her... or ... not at all, and we'd almost decided to sell the V Star... and just ride the Big Red Raider...

Buuuuuut now... after she saw as many gals as she did, ridin' their own and lookin' Fine!... on this ride... We've pretty much chosen, for now, to keep the Lil' V Star 'round for a while... give her some more time to get comfortable...

Which means some more Cowboy Engineering. As always... if I could just throw money at it, there'd be no problem... buuuut... considering the lack of such ability... There won't be any Changing Rigs in the close up future... So... I'll have to just conjure up a way to load two... as in dos, zwei, a pair... more than ONE! Large Motorcycles... on a fifth wheel! :o)

Slick already has her perch, sittin' back there as Tail gunner... Red... bein' the larger of the two wheeled ladies... is gonna have to climb up on the truck itself...and that is where all the options come in...

The bed is too tall... and the bike is too low to just set a ramp and roll her up... She high centers on the side of the bed... soooooo.... I either have to Dove Tail the side of the bed... or create some sort of an extended ramp setup... that shallows out the loading angle to get her flashy red self over that break point. or... some combination of the two.

...and that is what I'll be doin' for the next week or so with our Welder landlord, so we can get gone, sometime in the first part of September!

Help keep goin' RV Boondocking...goin' RV Boondocking!
Have you enjoyed your visits to my camp? I sure hope so. If you'd like to see what else I've written, you can follow this Trail to my "Bookshelf". Just know that any purchases of my lil' books and tales, helps keep me following the Trails of my beloved American West, collecting stories and yarns to entertain you with... and are Much Appreciated.
Many Thanks!

Return to the Home  page of goin' RV Boondocking
Visit my "Ribbon of Highway"  Blog on the Lil' sister to this site, Motorcycle Touring on Freedom Road
Posted by Brian at 9:07 AM

Brian
I thought you had the red raider transport figured out so I didn't say any thing. But I have a friend that owns a machine shop, a motorhome and a motorcycle. He has designed and built a neat carrier that is designed to fit on a trialer hitch or trailer that uses a segmented circular track to get around the high siding issue and a winch. You put the bike's front wheel in a carrier that is attached to the winch then just winch the bike up to the travel position. I looked on his web site to see if he had pics of it on there yet, but he didn't. I have sent him an email to see if he has any pics that he could send me to forward to you, I will see him at Atlanta Motor Speedway next weekend so I will be able to take my own pics if he doesn't have any, he had the carrier on the back of his motorhome at the spring race. I will let you know what I find out, sounds like it would be exactly what you need, in fact I thought of you when I saw it then. If you would, email me so that I have your email address
Tom Turner
t_m_turner at bellsouth.net

Brian, so glad you and Heidi could have a great time riding the road. I like the picture, I am sure Heidi took it so people could see a slight lean into a curve that you talk about. Hope you get all your figuring done and send pics soon. We have a lawn mower with the same problem, regular ramps wouldn't do with it, dragged so we ordered a long metal ramp that curves up, but allows the mower to ride up in the back of the pickup with no problem.