It's Been a Tough Ten Days and a Couple Hard Hauls...

So...I took off for Gettysburg, SD getting there with little difficulty. Settled on the colt I was going to load; It was really a choice between a gelding and a sister of his... the gelding won...

Had a bit of trouble for a couple minutes but he finally climbed in the trailer and I headed for Glendive, Montana to wait.

They hadn't got the requisite blood test for transportation.

Nigh on to half way back there... I'd just rolled through Faith, South Dakota when my eyes strolling across the dash noticed... "AW HELL COWBOY! ... You ain't got any voltage!"

Now, since fuel pumps and such require some electrical juice or your backside is sitting in a quiet truck on the side of the road with two unbroke broncs in the back... I swapped ends and headed back to Faith.

Pulled into the county fairgrounds in Glendive after dark. Managed to get CJ into a pen without any damage and went to bed for the night. Had to sit there that night and two more waiting but got loaded early on haul day. Had a sleepless night fretting about getting those unbroke colts into the trailer. So, just to show me my faults, they both just walked right in! We made a long hard haul for those colts to Fort Collins.


And then the Real fun began.

You see, these colts are green as grass. They been living in a herd their whole lives. He's 4 1/2 and she's 3 1/2... and they didn't want to get caught in the pen I'd arranged. Like a greenhorn I'd chosen to leave their leads off... pitiful.

Well, with them walking a circle around me in that pen she chose to dodge between CJ and the 2X12 Farm corral fence I'd tied my road pen panels to... and found the ONLY spike head protruding from that old fence... that I'd missed...

This being late on a Saturday afternoon... not a vet could be found... except of course for the Colorado State University Vet Hospital... where we spent a few hours and ohhh... $700?

The real concern here was, that eye wasn't blinking any more. The laceration was deep and in a bad place. Danger of broken orbital bones, nerve damage... direct damage to the eye itself...

If that eye doesn't blink it dries out and eventually, she'd lose it. :'(

My guts were churning. I was, pure honest, feeling as low as I could get... It's been an awful couple of months in my world to begin with... This happening three days after I loaded the horse in my trailer was NOT needed.

Well, we sat there in Fort Collins for a couple of days, treating the eye to keep it from drying out and causing ulcers... and begging the Boss to heal her up.

When the swelling reduced enough and that eye started blinking again, even if slow, my blood pressure dropped some 600 points.

A storm was threatening on the Front Range so I loaded late in the afternoon figuring on a long difficult haul to get to winter camp... and some $1000 poorer on an already too tight budget... My spirits were low.

But, we made the haul ok. Several hour/2 hour stops to let the ponies rest, eat and drink and we pulled into winter camp.


... got the pen set up quick and let them out into the quiet of the Arizona sunshine. 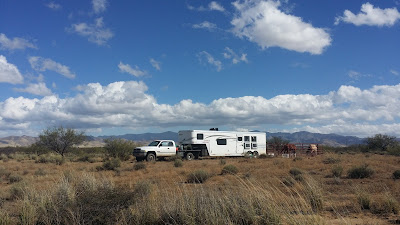 Scrambled for a couple of days to get settled. First day was getting a few more panels to stretch the road pen into something that'd work for a longer time... since the damage done to the budget erased the ability to set up the BIG working pen I'd planned on. (that would double as a good big corral). And also, getting the water access lined out.

Next morning... I go out just after sunrise to feed. The Buckskin filly, whose name is Pretty Poco Fox... but who I've gone to calling Cora... is Queen of the roost. She was top dog in her herd and figures to still be. 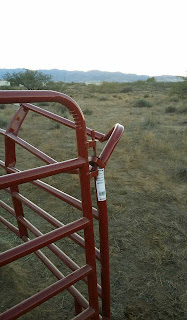 Well... I fiddled too long moving bales around and she went to chousing CJ a bit... causing him to take a good big jump over the water tub and chest one of my Light weight ROAD PEN panels...

Bought 3 ten foot panels the day before... lost 1 eight foot panel the next day... can you spell snake bit?

I swear... somebody tells me their luck is all bad and I just laugh... They haven't a clue about bad luck and the steep slope some busters have to climb ever' day of their whole life... all of it against the wind.

But there's no choice but to swing a leg and ride... till the day's light is gone.

Finally hauled my first load of water the next day. Which was a good thing, because I'd given the last gallon on the rig to the ponies that morning.

Of course that was a di doe too... standing there beside the truck talking to the well guy as the tank filled... "OH CRAP!" I jumped...

Some bozo with his mind running nine oh in twelve different directions had failed to "crack" the lid on top to vent the tank. That well pressure had it swelling up like a balloon! Damn near blew the sucker up!

Sheesh... now... I've had a couple days of just talking to my horses... flagging out where I'll put my road into this lil five acre patch... and just breathing.

The days are slowing down and some of that cacophony of useless noise so-sigh-uh-tee gets shoved into our brains is fading away.

It's that racing around trying to keep ahead of the beast that trips us... trips ME. Once I get that put aside... and live in MY world... I do ok... it's trying to live in that "other" world where I don't and Never fit... that gets me into difficulty. My brain gets so fogged and spinning I'm lucky to be able to accomplish any damn thing. 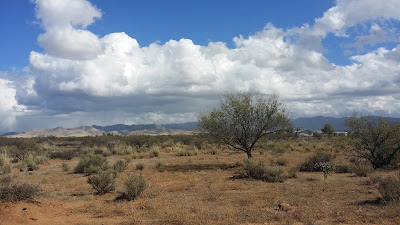 I live in the Shadow of the Chiricahua Mountains now... 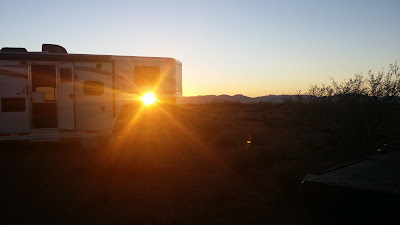 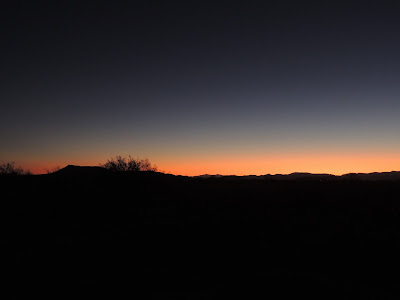 Working out a routine these days. Some outside work on the place. Some time with the ponies... and soon... getting back to some writing... but mostly... stopping to breathe... and see if the cacophony in my head will lay down and go quiet on this Arizona desert.

Hope you get to slow down, and the ponies enjoy it there.

You did good on finding that Vet college to stitch up the gash. That was IN your favor so that's something. I agree though...I haven't known anyone who has more UNfun things happening so you get to be the first. Maybe things will turn around for you and peace will settle, there in your 5 acre plot.

What is that saying: "If it wasn't for bad luck you wouldn't know what good luck was."

Been on the news here lately that they are rounding up some of our wild mustang herds in Oregon. Kind of makes me sad they won't be running free.