Wading Into an Unsure and Hectic Future...

We've chosen to pull out a day earlier than originally planned. It's only 200 miles and a bit to Sydney, "but since we aren't sure where we are and don't know where we're goin'... there's no use bein' late."

We'll leave late and stop early somewhere around the Fort Peck Dam. That'll leave us a pretty short run tomorrow so that we can get in with plenty of time to find out where we need to be, get our paperwork filled out and... GULP... be ready to work come Monday morning.

Not knowing where we'll truly be or what the situation there is... I've no way of knowing what my ability to "Connect" will be... so that's just another unknown... soon to be discovered.

I'm hopeful that the weather that has mostly been gentle with us all season will continue to smile. We've mostly managed to avoid the rains and fogs along the coast, the fires through the mountains and all the tribulations our folks down home have endured the past several days.

Now, with 12 hour days standing in a piling station of some sort coming up... I'd just as soon have the good weather hold. Truth be known they can't operate in bad weather so it's not so much that, but that if bad weather arrives it will hold up the works and we HAVE to leave for our Phoenix gig by midweek the last week of October...

So... if the three week harvest gets drug out much... things could get a mite tight...

In amongst all that... I'm working on the final edits and text work so I can Publish the newest Novel sometime in Early October...

I finished the cover for that story yesterday... and appropriately, since much of the story takes place there... the photograph that is the foundation of the cover is looking north toward the western side of the Bob Marshall wilderness from a position on the SW corner of the Scapegoat Wilderness east of Seeley Lake, Montana. 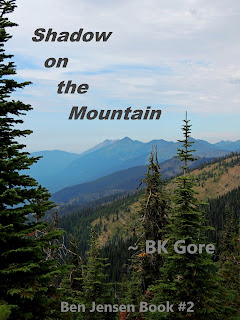 ... and there's an announcement to be made! In preparation for the release of book #2 of the Ben Jensen series...

I have rolled the prices for my first two novels, A Matter of Honor and A Pair of Second Chances, each the starters for their series, back to FREE at Smashwords.

That Price should be reflected at other retailers in the near future including Amazon as the change circulates up through the distribution chain.

This is a permanent change. If you've been waiting to try one of the series... you'll never get a better price! ;) So if you know somebody whose got a liking for Westerns (Honor) or more modern Mystery/suspense (Pair) pass the word on that they can get a good book for a pretty fair price!

So... I'd better get back to my journal making, manuscript editing, rig loading and tourista imitations... if I'm gonna git where I'm a goin'!

Life for a lazy man is truly getting difficult! ;)
Brian