A Leaf in the Wind

Another place we're slow to leave. So many camps along the road have grown on us. We pull into a place thinking we'll only stay for a day or two. Then extend, and extend again another day.

This camp at Nason Creek, along the Wenatchee River is one of those.

We've walked the trails above the river and over to the lake. We've met new road friends here, Brian and Sharon, camp hosts that recognized my show off Motorcycle as it rumbled out of the camp. ;) and we've shared conversation with Jim and Pam, camp hosts as well. 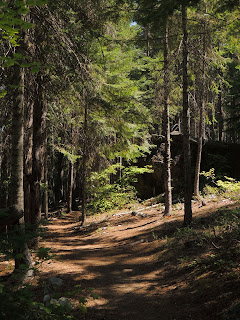 I've ridden some fine roads and sipped some excellent Washington brewed Beers in weather that's warmed up hot and dry as we pulled away from the coast that's held us for so long.

I'm not sure how far away Lake Wenatchee pulls people from, but I've seen boat trailers with British Columbia plates on 'em. I expect salmon hunters travel a good ways in search of their passions.

I've ridden that scooter thousands of miles in search of mine! 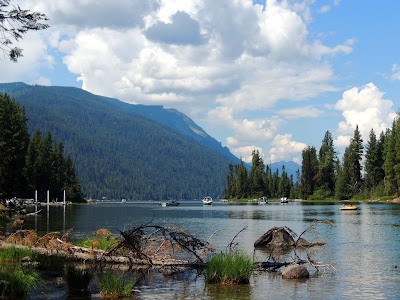 They launch their boats off a single ramp into the river just where it exits the lake. Around the corner is a nice swimming beach where families play... and a small store... 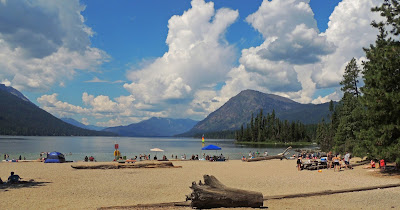 But even the boat ramp isn't reserved for just big ol' power cruisers... If you have a yen for quieter means of floating... that seems to fit the place too... 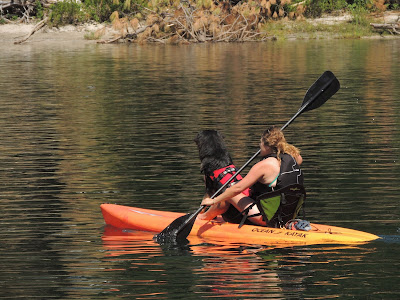 They called this a Kayak... looked more like a thick surfboard with a paddle to me... and I believe that's the first time I've ever seen a life preserver for a dog!

I have to say... that being her second day I believe on the water, and with a passenger to boot... she was doing a lot better than somebody else I can think of... 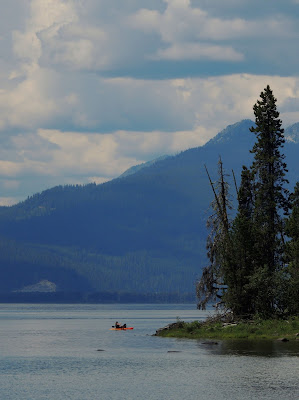 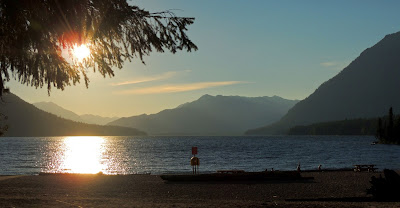 ... and sitting on the beach, eating ice cream from that lil' store... watching a day wind down...

Buuuut... Montana and the Rockies keep calling... so today, we'll get loaded and move on. We aren't sure where, or how far other than toward Montana.

We can't go too fast or we'll get there too early... which is kind of odd... how do you know you're early if you don't even really know where there is? ;)

I guess we'll know it when we see it. Till then, we'll just keep moving along finding whatever happens to turn up.

Just a Restless Rover
Brian
Posted by Brian at 7:30 AM

My lab has a life preserver…he wears it mostly in streams, and is very indignant when I put it on him. The great part about it is that it has a handle so the girl in the kayak only needs to reach him and haul him back on board if he falls in. Loving your travels through Washington.

I grew up in Spokane and visited Wenatchee/Leavenworth area many times.
Back in the 70's I was fishing for trout in Nason creek. I was standing in the creek and felt something brush against my leg. I looked down and saw a 30# plus salmon headin' upstream! Great memories of a real beautiful part of Washington.

Beautiful area. Would love sitting on that beach watching the sun go down.

That might be a paddle board and not a kayak.