Stretching the Boundaries of "Staying in Camp"

After a camp moving day and two days of motorized tourista scouting of the "new" local area 'round our Crowley Lake camp, we thought we should spend a day in camp getting some work done.

Now, lazy as I am that don't mean I just sit in camp building up fat for the coming winter. Staying In Camp doesn't really mean we outlaw stepping across the camp boundaries... Only that we leave the rigs parked.

I've also found that my word stringing is improved if I get out and get the blood pumpin' once in a while...

There's a road that takes off behind the camp toward the mountain. Heidi and the dogs had walked it a short ways, so we took off for a morning walk to explore it a bit farther. 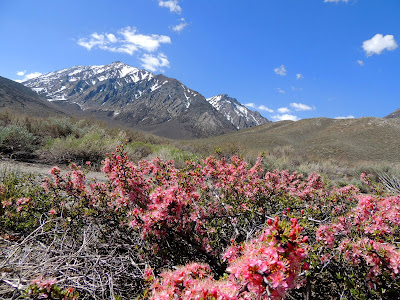 I'm one of that sort that says; "Well, since we're this far might as well look 'round that next bend." 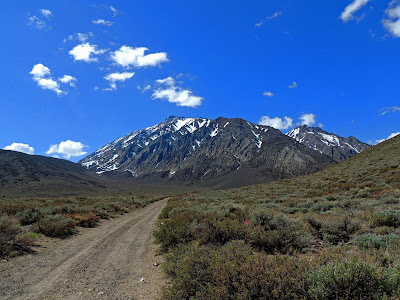 Now... for those of you who think I'm just the genuine infallible western hero... take a look at these two pics and see if you can spot my lil' photographic OOPS!

Either I've one leg shorter than the other... or there was a big ol' earthquake between shots that I missed! ;)

What can I say? I like both pics... but  finding ONE of those Mountains is gonna be a tough chore! :) 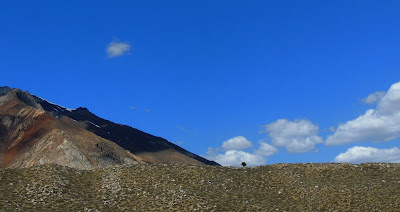 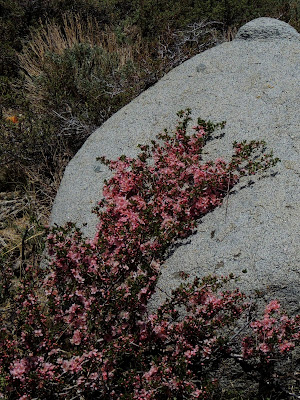 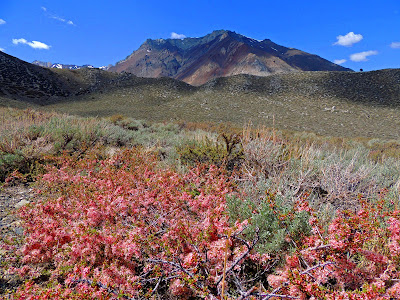 We got I'd guess maybe a mile and a half above camp and I look up and there's a saddle on the ridge to the north... It was so close, and the wonder of what it looked like... just over that ridge pulled me up. Sound familiar? :)

The sage is thick... and that brush with the pink flowers is pretty thorny so it all worked to dampen her ambition for bushwhackin'.

But brush don't bully me none! I got up into that saddle, with a lil' bit of wheezin'... and then, as long as I'm this far might as well climb up on that knob to the west... right?! ;)

...and since I'm here... that next knob ain't that far either... So... I ended up climbing that first lil' knob that makes the left shoulder of the saddle... and then the next one to the left of that...

Which gave me the views that nobody down below is ever gonna see! That is the payoff for the effort. :) 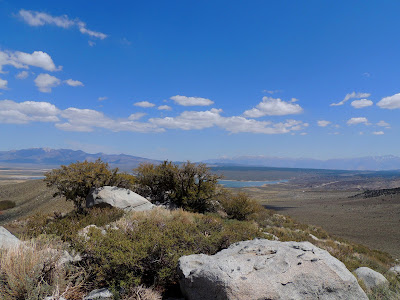 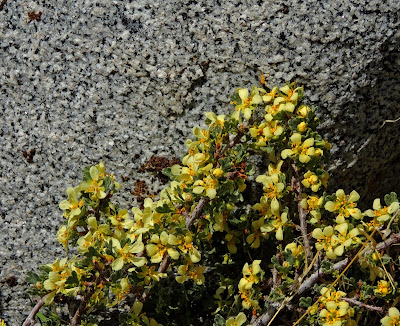 The good part of such a hike is that once you push up to the top... the hard part is behind you. It's all down hill from there! ;)

On the way back I looked over my shoulder and spotted this zoomy... 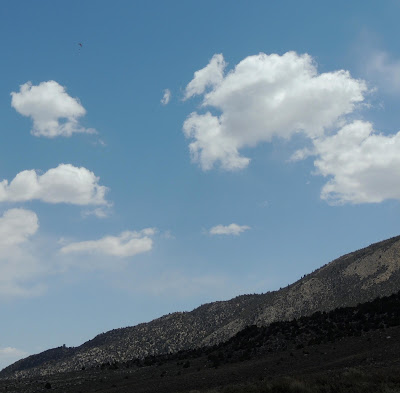 Don't see him? Look up in the top left corner... 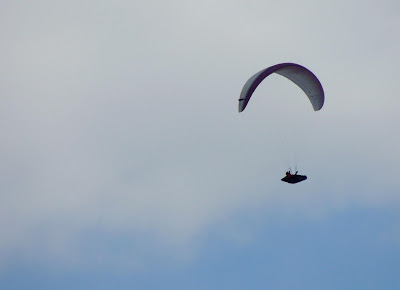 Some sort of a para soaring setup I don't believe I've ever seen before. I don't know if he jumped off a mountain or got dumped out of an airplane. Just as we spotted the outfit, he caught a thermal and woosh! He must have climbed 500 feet. Pretty cool!

But, as always, all good things must one day end... so I hoofed it back to where herself and the dogs found a comfortable rock to wait out my exploration, and then on to camp where I spent the rest of the afternoon punching buttons, trying to catch up with all the "improvements" the various software outfits keep dumping on us slow learners... but I gotta do what I gotta do to make a living right? ;)

Living high wide and handsome don't have to cost much!
Brian

Hilton Creek east of your camp is a great hike especially if its hot... trees and water.. We stay there, and enjoy hikes w our friends with young children and a huge dog that they have to protect us from the wild animals. Native American's left their mark among the rocks.

Hilton Creek east of your camp is a great hike especially if its hot... trees and water.. We stay there, and enjoy hikes w our friends with young children and a huge dog that they have to protect us from the wild animals. Native American's left their mark among the rocks.