Somewhere in My Soul is a Valley... "and a River Runs Through it"

You get to see some parts of a place only when the weather is being not so gentle. We got here in time for the storm... The only problem was, it was a lil' too much storm for any photography of it. The clouds and mists too low. They swallowed up the mountains and the light... at least for a piker of my photographic ability...

It's one of those times where though a place is as Soul Filling as ever, to the eyes and to the heart, rain lashing and snow falling, cold wind blowing... It escapes the camera.

It takes a far better photog than this buster to capture it on film... or electronic digits. ;) Maybe that's not a bad thing. Could be, once in a while a fella needs to just put his camera, his laptop and his pen and paper away... and See. Just... Be... Just breathe, In such a place as this.

Sometimes... You have to just Feed your Soul.

After a storm passes, here at Zion, waterfalls are running that ONLY run after a good storm. Those that do run, flow stronger... So, if you're not there, you don't get to see 'em. It's something for which there aren't words... The waters speaks words that you can't put on a page. They speak words that only your Soul can hear.

Waterfalls are a difficulty of mine when it comes to photography. I keep on trying. Every once in a while I capture a nice shot... A Photograph that Speaks.

... like the water pouring out of that Culvert last year up in Montana...


But most times... I just can't capture what my eyes and soul see in that moving water... and put it in a photograph... I suppose a bit of it is that You Have to BE There... sort of thing... but still, I'd sure like to get better at it... I'd like to be better able to share it...

Possibly... it's a fear or a shyness to just say what the waters have spoken...

I've been trying here in Zion... to Collect a bit of that Spirit... Found in Moving water... 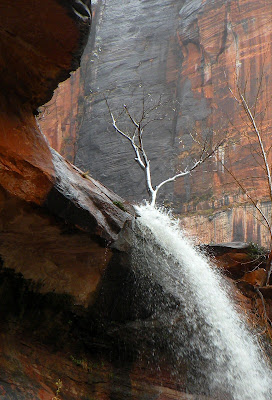 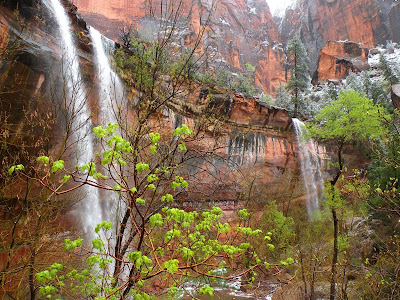 Have you ever seen the film; "A River Runs Through It" ? There's a monologue in it... been so long now I don't remember if it was the introduction or the closing of the movie... but it talked about Moving Water... and the way it spoke to something inside a man... 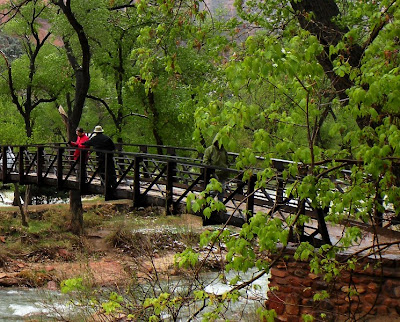 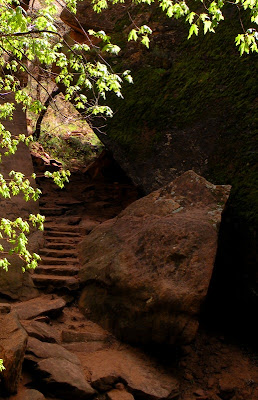 I don't know... Maybe it's due to having grown up a kid in the desert.. I Love water... flowing, Free Running water, it's kind of odd I guess, that I don't care much for swimming ;) ... The crashing surf is awesome... but... the thing that reaches out and touches my Soul... is to sit quiet on the bank of a river... The Blackfoot, The Clearwater, the Virgin... or just some tiny high mountain stream...

“Eventually, all things merge into one, and a river runs through it. The river was cut by the world's great flood and runs over rocks from the basement of time. On some of the rocks are timeless raindrops. Under the rocks are the words, and some of the words are theirs.
I am haunted by waters.”
― Norman Maclean, A River Runs Through It and Other Stories

Like the Rivers, I keep on Moving. As the river carves on the banks confining it's journey and writing new history... I chip away at the limitations that guide my life, always striving to overcome, to find new, to grow, to learn... and am always thankful... For the Waters.

Following the Rivers
Brian
Posted by Brian at 9:29 AM

Last year when you waxed poetic about water I commented about that passage from A River Runs Though It. It does speak to exactly the way water makes me feel. Great post and pretty pictures. Made my day!

Great photos as always Brian. Hope you and Heidi are doing great. Our newest member has gained up to 10 pounds and 8 ounces. a hungry hungry hippo. LOL
Have a good one and keep those pics coming. Any news about new book publishing date??

Planned on having it done by now. Hard to write when there's country to see ;) Let myself get diverted... Again!

I'm actually gonna be hunting a camp to lay up in and WORK for a few weeks when we pull out of here in a few days.

Very nice photos for someone who is beating himself up for not doing it well! A photo is never going to get the entire experience: the sound, the smells, the misty spray. You did great job with the photographs though.