The Road... or RoadLESS... Monument Valley

We had to drive in from our camp in Mesa Verde, hauling the laptop, to a place where signal lives... to take care of some of the demands of the 21st century... so I'm taking advantage of it to try and catch up a post or two.

A few days back we made that run over the Road through Monument Valley.  The thing to keep in mind there is that Navajo Indians have a different perception of what constitutes a Road... then most of the rest of us. ;)

After a morning walk along the top of the canyon above the San Juan river, as it cuts it's way past our camp and through the Goosenecks State park area, we climbed in the Dodge and headed south. 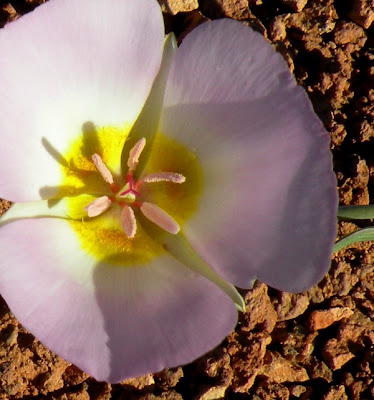 If you look close you can see the RV camp in the top right... and there in the bottom left... a camp of boats on the river... 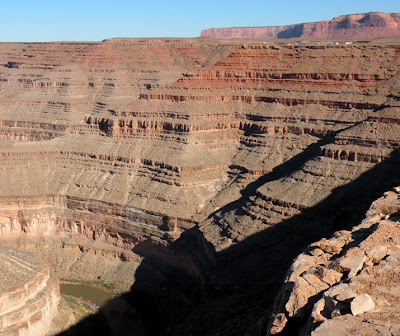 As we were rolling south I found a familiar spot... Recognize it?

I was taking the photograph when I commented to Heidi that "unless I miss my guess, this is where Forrest Gump decided to head home."

The words were still hanging in the air when I turned and there behind me, just off the side of the road, was this sign... 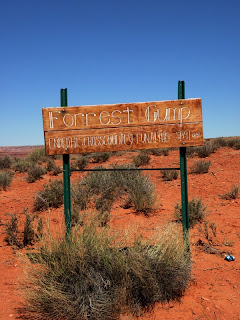 How's that for a famous spot in American History huh? ;)

Something you'll likely want to do is UNLOAD the big Ol' Road Bike, sitting on your truck... Before... you make that run over what is not a road... but simply a piece of dusty, rocky, desert on which all vegetation has been removed. That's about the only thing that made that piece of the Navajo Tribal Park a road... 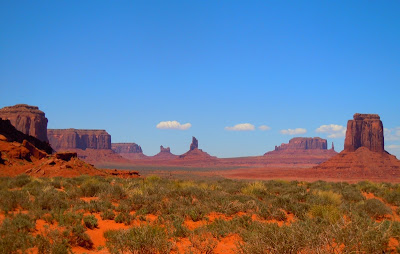 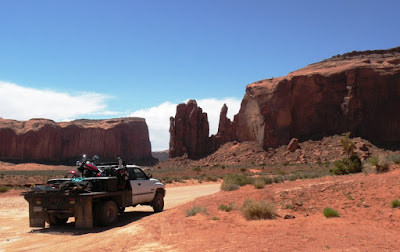 Yeah. NOT unloading the bike and then rockin' and boppin' across that desert track was NOT the best choice I've ever made. Oh lordy... when the guy told us his story about the Tour truck getting stuck in the sand... I started to lose confidence...

When I had to put the truck into 4 wheel drive to be able to go slow enough over the rocks and holes... as my tires rolled off the pavement onto the "Navajo Road"... I knew, for sure and for certain... that "Nah, we don't need to unload it" was a mistaken Idea. ;) 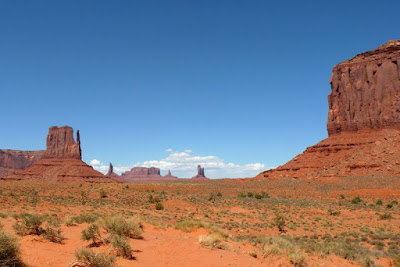 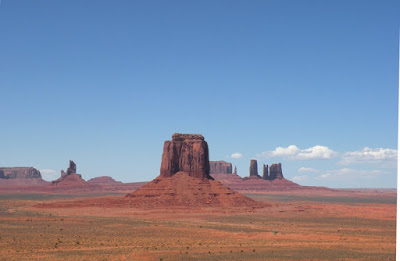 They were filming some sort of remake of "The Lone Ranger" when we were there. Johnny Depp? is playing the Lone Ranger? ... Now how is THAT going to work? Hopefully better than his horsemanship...

... it seems he was sitting on a horse. Not Riding a horse. The horse wasn't walking... they weren't doing a stunt... they weren't even moving from what I could gather... Ol' Johnnie was simply sitting on the horse... and WHUMP! Fell off! :) Breaking three ribs or so in the process...

Guess they'll need a Stand in Stunt man to do the Hi Ho Silver and Away! Bits... Huh? ;) 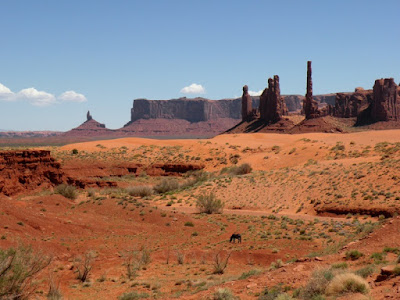 I can honestly say, I was kinda glad to be OFF of that lil' bit of dusty desert. Between the watching the bike bouncing around in the rear view mirror... and the folks in a hurry on a lane and a half, dirt track, slightly removed from 4X4 status... passing only to park in the middle as soon as they went around... to take pictures... it was an experience. ;)

Ah... but then I couldn't capture these pics without the experience right? :)

Rolled up the Moki Dugway the next day... and on up to Natural Bridges National Monument... and supper at the Swinging Steak...

But that'll have to wait for the next update...

Back into the Internetless Dark!
Brian
Posted by Brian at 3:27 PM

That picture with the camp on the upper right and boat camp lower left certainly gave me a lot of perspective...absolutely amazing! Thanks for sharing

The road across Monument Valley has been featured or a backdrop in many movies. That can be a cold lonely piece of blacktop in the winter and hotter than hell in the summer. Also, unless they've fixed it since the last time I was there, it ain't what you would call a smooth ride either. But it sure is pretty in it's own right.

Your pictures are beautiful! And your description of the "road" in Monument Valley is fairly accurate and similar to what we encountered last June.

I thought you would really enjoy knowing that Johnny in actually playing Tonto in the movie. I haven't heard who is playing the Ranger. But it will be exciting to see the Valley again in a "western"!!