The Dust is Settling and I'm Back to Cowboy Philosophizin'...

It's too cold 'round the Warm? Arizona Desert to try and put any finish on the cabinet... So it's done as much as it's gonna get for a bit. ;)

Modified the design a bit to make up for excessive headspace... and to allow the parts I had... to fit together. The door I had to cut came from cutting off the top two "Panels" of a six panel door left over from a remodel... a little sanding to take off the 'outside' finish leaves kind of a nice accent... eventually I intend to tool a couple of leather panels for those two interior squares... 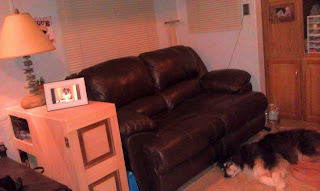 As it is it's quite some better than the four drawer plastic tower it replaced.

Never meant for Temporary to last a year and a half or so.

... Is it just me or has there been an unusually high rash of broken rigs lately? Now my busted stuff is normal karma! ;) but then...

...My brother in law and sister shredded a tire that tore up the side of their Alumascape, Thom and Dar broke a slide bar, friends from PIR have had grief with a coolant leak and more, Sean and Louise have had a spate of busted parts on Odyssey... another blogger I read got his truck side swiped by a drunk who managed to miss the trailer... Tin Teepee has had their problems with "Parts"... and Ol' George had his solar panels blow off the roof of Ms. Tioga, goin' down the road! Miraculously, they landed softly and solar side up, undamaged! There's yet others... the list has been long lately...

Just seems like more busted parts than usual... I think the RV Gremlins are puttin' in a lil' overtime. Ya'll take it slow and be careful out there... Ya hear?

Ya know... it's nice to be sittin' south in the winter, out of the snow, even if it is a mite chilly ;) but I'm finding out a lil' something. I've talked 'bout it some, in different ways.

Having not moved much since early November... and trying to "work" ... there's been a growing, familiar sensation... That restless urge... Hitch Itch...

When I mention it to some, they ask; "You've been on the road a while... You've run a million miles before that... What is it you still want to see?"

Just Movement... THAT ... I think, is the major component of a gypsy's personality. Not the urge to get somewhere... or even See something...

I think about that what I've done... and it was ALL about, movement. Cowboyin' I was rocking on the storm deck of a horse. Motorcycles, leaning through the twisties, or just splittin' the wind on the high plains. Even the army was cross country by foot or by armored vehicle... Movement...

When I think of the times I wasn't all giggling happy and excited... but just... content, breathing easy, and feeling I was where  I belonged... I was Moving.

A few years ago... when I couldn't sleep... I'd climb on the bike and ride through the night. I remember doin' the same thing many years ago in a pickup. When my mind would get to racing and I ached for calm I would just drive/ride... watching the mountains slide by in the dark. The cool and quiet of the night...

When that internal spring is winding tight... my head is swirling... my guts are tightening up with that frenzied, addled, jittery, sometimes almost panicked feeling... all I have to do is climb on a horse, a motorcycle, the seat of a pickup... or... just walk far and fast... and the tension relaxes.

Mere Movement.. the feeling of the wind in their face has an amazingly soothing affect on a Gypsy.

Another ten, eleven days and I'll be rolling for Colorado and Christmas...
(I'll call it Holiday... after they change Ramadan... and all the others... to HOLIDAY... who am I kidding... No I won't!)

Itchy and Knowing Why
Brian
Posted by Brian at 8:04 AM

That cabinet looks great! It will be a nice little surprise for your lady when she gets back to the rig.

Glad to hear your writing is coming along, it sounds like hard work to me.

That cabinet is lookin' fine, even with the 'shiny stuff'.

well soon u will be heading up country ,that will cure the itch for a bit..but it will always be there ,so scratch when ya need to ,good travels when ya get to it ..

Nice cabinet. The thing I do miss about having a 'place' is making small or not so small improvements. Hotel rooms, even big ones, don't lend themselves to that much.

The breaking rig issue, I'm thinking, may be that the rigs are all now getting the shiny new kinda worn off them. RV rigs are not generally built to live in full time, and start showing that after some number of years. Maybe just all these folks got started about the same time? Just my thoughts as I sit in my Honduras hotel.