We're Back to the Beginning... Again

We'd planned on spending another ten days or so, into the fall, in Yellowstone... 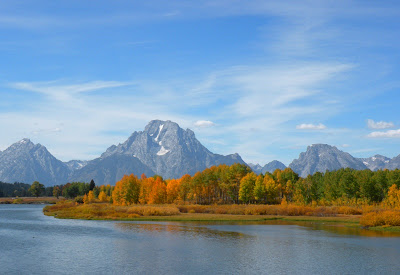 ... and bummer for us, the color down in the Tetons was just hittin' it's stride, when this Ol' Twister made the decision to cut and run for the barn!

I got up in the morning, a couple mornin's back and up and decided we're goin' down where I know the guy on the end of the welding rod... So, we took a run 'cross the state of Wyoming at 45 mph. Ya know what? Runnin' the Cowboy State... at 45 mph, cringin' ever' time the tires thumped across a bridge expansion joint... or the rig humped and bobbed over heaves in the pavement, makes that a Biiiiig state! :)

Decided to cut our Yellowstone stay short, 'cause what I didn't want to experience was makin' the run, with a busted rig... in the middle of an early fall snow storm! ... Nahhhh... that NEVER happens in Wyoming! :)

Spent the night 'fore last in the rest area at Sweetwater Station, got up to leave early, and ended up helping some guy get his dead Lexus started. :)

Got here early last night after a two day run that usually takes us less than one. I went right to work strippin' all the skin off the fiver... again... Miss Krea looked under there and says; "Wow! I showed Jaime your FB post and he said; That's really mean!... I don't think he'll say that, when he sees this!"

... when the Welder got home, James looks under the rig and the first words he says are; "Oh My God!"...

Heidi asked him; "Do ya think we're lucky to have got here?"

Now, James is one of those welders that does the sort of welding that passes Xray tests and such, so I guess they do something different than those guys that are certified by R.V.I.A. (The RV mechanic certification outfit) I'd not give their certificate to anyone, for use in that SMALL room in your rig!

Anyhoo... we got here with nuthin' else fallin' off. Over the next week or so, as soon as our Friend can carve out the time, we'll get the Eagle healed up proper, and back on the road. The worry of that several hundred miles is done, and now just the work of fixing the mess of the "Repair" left. :)

We've got some other business to attend to before we cut for the desert and another NASCAR Race :) and as long as I'll be sittin' here for a bit, there's several other maintenance bits and other chores I've been putting off that I'll try to get caught up on...

... As well as, finishing the last of the editing on The Next Great BK Gore Novel! :)

Might even do a Highwayman imitation and knock over a 7-11 or three, so I could afford to do that re-axle job I've wanted to do... one axle is a bit fatigued with the alignment a mite off, wearing tires a lil' quicker than normal... what with wheel bearings, brakes and such, it wouldn't be much costlier to just replace the whole shebang, with an axle of a lil' more heft, that Jayco should have put on there in the first place... but that would mean selling a lot more books! :) so, we'll see, that may just wait a mite longer.

This is kind of an aggravation to be honest... this hitch deal... 'cause the difference, between what Jayco had built, for the trailer frame... and what the RIGHT weight of framing members would have cost, when this rig was built, was maybe a hundred bucks, two hundred tops...

... So they cheaped out... as MOST RV manufacturers do... and saved that piddly lil' bit... and the resulting metal fatigue, caught me hanging...I swear, sometimes I think that the majority of RV builders build 'em to be parked... Not actually towed!

If... I'd NOT been fairly diligent about checking the rig over at stops and unhitching and such... I'd NOT have found those cracks... and the thing would have failed at highway speed somewhere... so one lesson is... when you stop for fuel, when you hitch up, when you unhitch... every once in a while, just for the heck of it... go over your rig, looking for cracks, loose bits, anything that don't look right... it'll keep things from goin' from not good... to really bad! :)

Ah well, I guess if they'd built the thing right, I'd not have a spleen in such great condition... from all its Healthy Venting! :)

The Eagle has Landed in Nunn... Safe and Sound (For a couple weeks)
Brian

Toatally agree with your assessment of RV construction quality. Any chance you could post a few pictures of the original breaks and final fix?
Thanks
Al

Sorry to hear you guys took off from our country, we were thinking of taking the convertible out this weekend and sneaking up on you guys. Glad you made it safely to Wyoming and good luck with the repairs.

Al; Actually, I've got pictures of the original failure, the "Repair" and I'll take some of the REAL repair... I'm planning to build a page for the Main website... to detail the thing... maybe it'll help somebody on down the road... not a real un-common failure

Janna and Mike; BUMMER for US! :( We didn't want to...but... that busted frame and my total lack of confidence in that "Repair" pushed me south early...

Glad you made it safe to your GOOD welder. It pays to have one in the family for sure! I was gonna ask for before and after pictures, too. I think Norm would be interested since he welds and would have an OMG! to add! LOL
2 weeks oughta give you a nice chance to do those chores and visit. Have a little fun in there, too.

So glad you are safe and have a good welder to attend to the repairs. We have an excellent professional welder in the family too. It's nice to have someone you can trust.

Add us to the list of looking at the photos:)